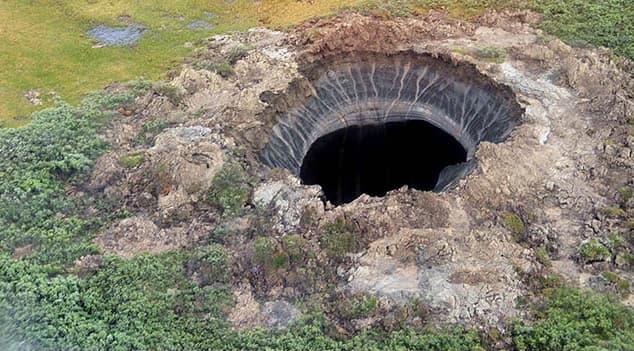 This massive hole recently appeared in Siberia (shown is the first hole). Upon its discovery, a number of news agencies began reporting about this "mysterious" beast that has the world baffled. Individuals started to blame aliens, massive geothermal explosions, and a host of other potential (but zany) culprits. Admittedly, the hole is a bit baffling... if you're not an Earth Scientists.; however, it you've studied geology, it does not take too long to figure out the details surrounding the creation of this hole—which is precisely what happened.

But before we get into how these two holes were created, here are the basic facts about the first gaping maw in the Earth:

The first hole (the one that has been extensively studied) is 50 to 70 meters (164 to 230 feet) deep. For comparison, Niagara Falls is 53.6 meters (176 feet) high. The diameter of the hole is difficult to measure precisely, due to its distorted shape, but it is approximately 30 meters (98 feet) in diameter, which is large enough to swallow a few school buses. About 80% of the hole is filled with ice that is slowly being melted by the sun, and the sides are running streams of water. Thus, the bottom is covered in water, and scientists estimate that the holes appeared within the last 2 years.

Shortly after reaching the first site, scientists announced that the holes seem to be  natural phenomena occurring in the region’s permafrost (technically, “permafrost” is any soil that has been frozen for at least two years; however, much of our planet’s permafrost has been at subzero temperatures for tens of thousands of years). The initial findings state that the "melting permafrost via climate change" hypothesis is all but confirmed.

Indeed, the second hole that has been discovered in Siberia’s Yamal Peninsula is strikingly similar is composition to the original finding (it is "exactly" like the first hole, except that it is much smaller). Ultimately, this supports the "climate change" hypothesis surrounding the first hole. The second crater lies about 30 kilometers (18.6 miles) away from the original.

Currently, evidence indicates that these holes are caused by global warming (or climate change), which causes dramatic sifts in Earth's permafrost. It is believed that the heating cycle causes pressure to mount, and a sudden release causes a collapse in the permafrost. University of New South Wales polar scientist Chris Fogwill agrees with the findings, which report that global warming is the cause. He asserts that what we see is likely a collapsed “pingo,” a natural geological phenomenon associated with the melting permafrost.

“We’re seeing much more activity in permafrost areas than we’ve seen in the historical past. A lot of this relates to this high degree of warming around these high arctic areas which are experiencing some of the highest rates of warming on earth.” Unfortunately, scientists have yet to collect all the necessary evidence, as the crater is so fragile that researchers were unable to explore the quickly forming lake at the bottom. However, aliens and other such things have been thoroughly ruled out.

Scientists predict that the crater could potentially form into a hearty lake, which would offer important insight into Siberia's geographic and geological history. This is process is of paramount importance, as scientists assert that similar processes appeared to be taking place in the landscape's ancient history, about 8,000 years ago. It is possibly that these patterns are repeating. If this theory is proved to be true, it will offer notable insights into the formation of the Yamal Peninsula.
------------------

You can read our initial reports on this development here.