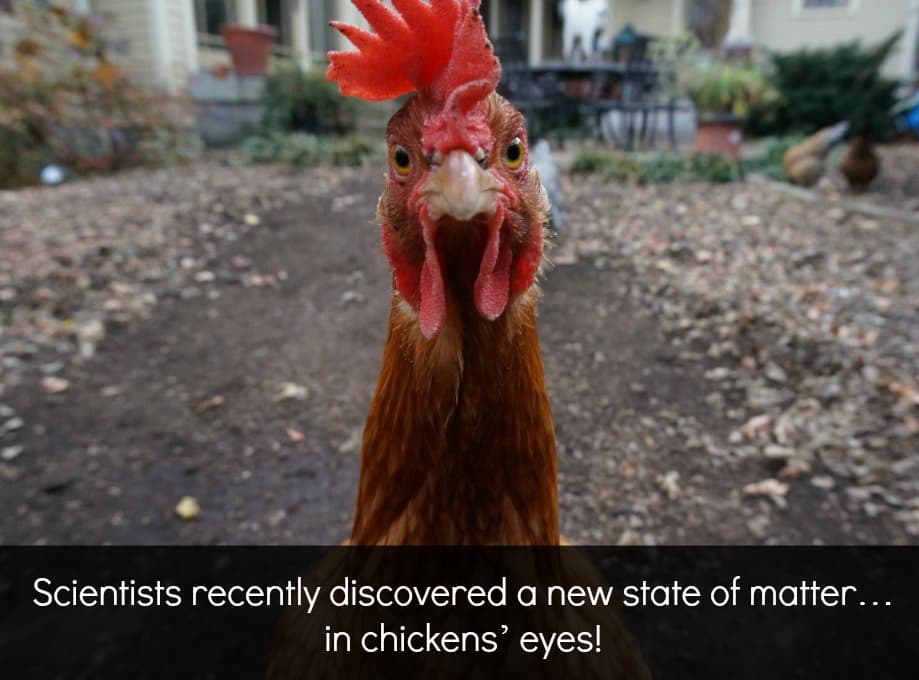 In our day to day lives, we encounter all different kinds of matter. Of course, there are the solids—the road beneath your feet, the cars that wiz by you, and your friend who walks beside you. Then there are the liquids, things like water in a ditch and the blood that runs through our veins. Lastly, we have the gasses, the water vapor in the clouds and the oxygen that we all breathe.

These are the three states of matter that, most people believe, make up everyday life. However, there is a fourth kind that we don't often think about: Plasma. One of the most familiar examples of this is lightening. Our sun and all the stars are also made of plasma. Ultimately, there is *a lot* of plasma in the universe. So it would seem that that's it. Solids, liquids, gases, and plasma. Together, they make up everything in the universe, right?

In fact, scientists currently assert that 96% of the total energy density of the universe consists of a combination of cold dark matter and dark energy. The term "energy density" simply means "energy per a unit of volume;" ultimately, this means  that most of the universe is not made up of matter as we know it. Moreover, aside from dark matter and dark energy, there are Bose–Einstein condensates (which only occur at temperatures very close to absolute zero), neutron-degenerate matter (which occurs in things like neutron stars), hypothetical quark matter (which is found in hypothetical quark stars)...the list goes on and on, really.

Of course, the aforementioned are generally only found in the distant reaches of the cosmos, far from Earth. But there are forms of matter on our planet that do not fit into the four traditional categories. Case in point, scientists recently discovered a new form of matter that exists, in all places, in the eyes of chickens.

This unusual arrangement of particles was discovered just a few weeks ago, in late February, in the cells of the creatures' eyes. This observation was the first time that scientists saw such an arrangement in a biological system; it is has been dubbed "disordered hyperuniformity," and it allows materials to behave like both crystals and liquids.

A crystal is a solid whose atoms are arranged in an ordered pattern in all spacial directions, while in a liquid, there is no long-range order. This makes the newly discovered form of matter seem like a bit of a contradiction; however, its properties can be easily understood—in short,  this form of matter exhibits order over large distances and disorder over small distances.

So, why do chicken's need this special form of matter? It has to do with the way the chickens see. Unlike humans, that have three types of photoreceptors to see color,  chickens have four photoreceptors (blue, green, red, and the fourth, violet). Then there is the fifth light-detecting type (so five photorecptors, all in all). All of these are crammed into a single tissue layer on the retina. Ultimately, finding a way to arrange all of these is a rather complex and complicated process.

Princeton researcher Salvatore Torquato states, "The system is frustrated from finding what might be the optimal solution, which would be the typical ordered arrangement. While the pattern must be disordered, it must also be as uniform as possible. Thus, disordered hyperuniformity is an excellent solution."

In short, the photoreceptors in chickens are not perfectly regular; however, they are  as regular as is permissible given the arrangement constraints in the cellular tissue. It is really rather amazing when you think about it. Such complex systems seem extremely difficult to manage. Yet, as is often the case, evolution found a way.