How Unique are Humans? The Science of Sight 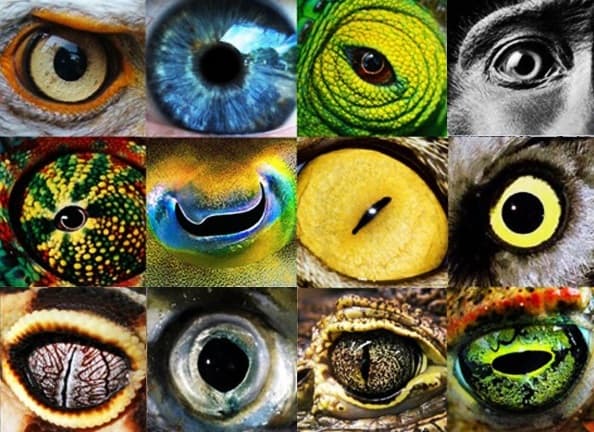 A fun way of proving this point is by attempting the following: Close your eyes and picture a color that you have never seen, one that is entirely original. You can’t do it. Although we can see a number of different colors, we cannot imagine an imaginary color; however, there are animals that can see those imaginary colors; or rather, there are many creatures that can see colors that we cannot.

To understand this phenomenon, you need to have a basic understanding of how our eyes work.

Ultimately, our ability to see colors is derived from cells in our eyes called “cones.” There are three different types, and our brain uses these cones to interpret wavelengths of light into three colors. They peak in the colors red, green, and blue. This allows us to see these three colors and all the colors that you get when you mix the various combinations together—amounting to some one million colors. To better understand this, let’s look at man’s best friend...

Dogs only have two types of cones: Blue and green. As such, they can see blue, green, and various shades of yellow (because yellow is what you get when you mix blue and green). But what about a species that we are not so fond of, say pigeons (everyone’s favorite nuisance)? These little birds might seem like pests, but they are actually quite amazing creatures.

For starters, scientists have discovered that pigeons have five cones, meaning that they have the ability to see two colors that we don’t have names for, and which we can’t possibly imagine. These extra cones theoretically allow pigeons to see some ten billion colors.

And then there are all the various forms of light to consider.

Ultimately, what humans call “light” is really only “visible light” (the light that humans can see), and it makes up just a small part of the electromagnetic spectrum. There are also radio waves, microwaves, infrared, ultraviolet, X-rays, and gamma rays. That’s right, the visible light that comes from your lamp and the radio waves that come from your radio station are just two types of what is, fundamentally, the same thing.

While visible light is detected by the human eye as it travels from stars, eels, lightning bugs, and similar sources (allowing us to see rainbows, fireworks, and the like), our radios are able to capture the radio waves emitted by radio stations (bringing us our favorite Dropkick Murphy's songs...or Taylor Swift or whomever); however, radio waves are also emitted by a number of other objects, like stars and gases in space.

And while humans can only see visible light, birds (like the pigeon) can see visible and ultraviolet light, which opens up a whole new world to them.

Ultimately, your average pigeon  soars through a world that is forever closed to us. Theirs is a world that we can never envision, never truly fathom. But in the end, this is just one (rather simple) proof that (although some may seem like pests) the world is filled with astounding creatures, each with its own unique quality...we’ve only to open our eyes and see them.