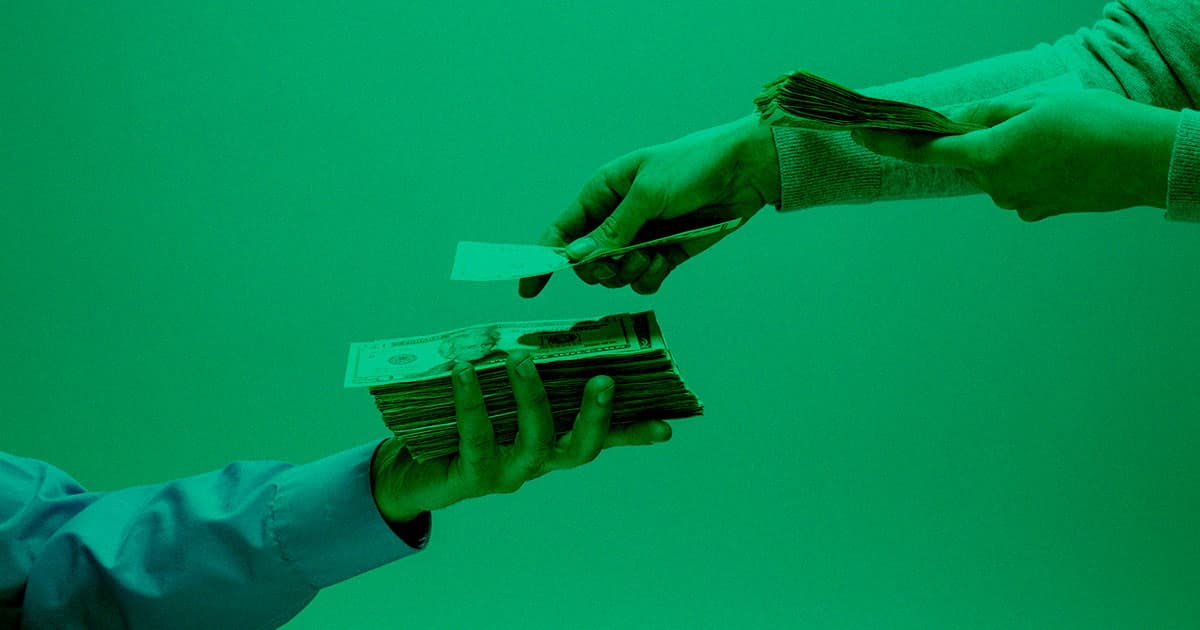 It's official: money can, in fact, buy you happiness. , as NBC reports

An experiment, described in a new paper published in the journal PNAS this week, was simple: researchers gave 200 people a one-time sum of $10,000 — sourced from two anonymous donors — and asked them to rate their happiness on a monthly basis.

The catch: they had to spend the ten grand within just three months.

And the result? Participants who received the cash rated their happiness higher than a control group after a luxurious three months, depending on their incomes. And their happiness remained at those elevated levels even after that, the researchers found.

In short, the lower the participants' incomes, the higher their gain in perceived happiness. Above a certain threshold in household income, however, those increases were far lower or even non-existent.

Sure, the results may not exactly be the most groundbreaking, but the experiment supports the idea that a cash injection, such as a universal basic income, could have a substantial and positive effect on people's lives.

Participants had no idea they were part of an experiment when they signed up for a "mystery experiment," organized by TED's Chris Anderson, back in December 2020. Participants had to be over 21 and fluent in English.

"It’s my hope this experiment teaches us something truly important about human nature," Anderson wrote in a Twitter announcement at the time. "And turns into something meaningful in your own life."

Several participants didn't believe the experiment was real until they actually saw the money in the bank account, MarketWatch reports.

A control group of 100 people, who didn't get any money, were also asked to rate their happiness on a monthly basis.

"Our data provide the clearest evidence to date that private citizens can improve net global happiness through voluntary redistribution to those with less," the researchers wrote in their paper.

But there's some nuance to the results as well: participants whose annual household income exceeded $123,000 weren't much happier after receiving the cash gift.

"Given that 99 percent of individuals earn less than this amount, these findings suggest that cash transfers could benefit the vast majority of the world’s population," the authors wrote in their paper.

"Ten thousand dollars in certain places around the world can really buy you a lot," coauthor Ryan Dwyer, who was a University of British Columbia PhD student at the time, told NBC News. "Some people spent a lot of the money paying down their mortgage or doing a big renovation on their house."

The study does have some limitations, from selection biases built into the efforts of finding participants — they had to both live in a specific country, be on Twitter, and speak English fluently — to the fact that their happiness was only actively being measured for a relatively short period of time.

But in the end, University of British Columbia psychology professor and study coauthor Elizabeth Dunn hopes the experiment will encourage other wealthy donors to do the same.

"My biggest fondest hope for this study is that people will copy it, that people will think it’s something they can do," she told MarketWatch. "It doesn’t need to be $2 million, even a much smaller amount of money can make a difference."

READ MORE: Mystery couple spent $2 million dishing out $10,000 gifts to people around the world — here’s what happened to the recipients [MarketWatch]

Read This Next
FrancisGang
The Pope Just Endorsed Universal Basic Income
Cost of Living
This Company Is Paying People $1,830 to Film Them Constantly
Essentials First
Basic Income Recipients Spent the Money on “Literal Necessities”
UBI
Study: Universal Basic Income Won't Make People Work Less
Localized Basic Income
California Could Soon Give Low-Income Residents a Monthly Check
More on Future Society
Head Like A Hole
Wednesday on futurism
Elon Musk's Crying About Trent Reznor Shows That He Is a Big, Big Baby
Miserly Musk
Tuesday on the byte
Cheapskate Elon Musk Refusing to Pay Bills at Twitter
Secrets Secrets
Tuesday on futurism
Elon Musk Vigorously Denies That SBF Secretly Owns Part of Twitter
READ MORE STORIES ABOUT / Future Society
Keep up.
Subscribe to our daily newsletter to keep in touch with the subjects shaping our future.
+Social+Newsletter
TopicsAbout UsContact Us
Copyright ©, Camden Media Inc All Rights Reserved. See our User Agreement, Privacy Policy and Data Use Policy. The material on this site may not be reproduced, distributed, transmitted, cached or otherwise used, except with prior written permission of Futurism. Articles may contain affiliate links which enable us to share in the revenue of any purchases made.
Fonts by Typekit and Monotype.