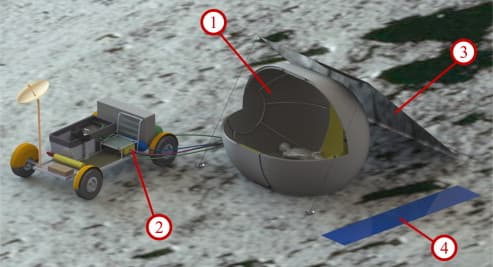 In relation to the Apollo moon landings, which are among the greatest achievements in space exploration, it’s worth noting that the six missions that successfully landed on the moon amounted to a total of just 3 days and 6 hours of lunar surface exploration by humans. As we set our sights on returning to our natural satellite (or going even further, like to Mars), it’s important to develop a technology that will allow longer and more comfortable manned planetary exploration.

A team of researchers, led by Samuel S. Schreiner from the Massachusetts Institute of Technology (MIT), has proposed a system that would extend the duration of lunar missions, and could be also implemented on Mars and other planets, if necessary. They designed an overnight lunar habitat with a solar shield, a solar array, and an Environmental Control and Life Support System (ECLSS) on a rover like the one used during the Apollo missions.

The scientists hope that the proposed system will double the distance reachable from the lunar base, thus increasing the area available for science and exploration by a factor of four.

“The proposed system has the potential to double the reachable distance from the lunar base, increasing the reachable area by a factor of four,” the researchers write in a paper. “Given that the Apollo missions reached a maximum distance of 4.7 miles (7.5 km) away from the lunar lander, this system is expected to increase mission range to 9.4 miles (15.1 km) as an extremely conservative estimate—due to the fact that this system also breaks the walk-back constraint on lunar surface exploration, it has the potential to enable mission ranges of over 12.5 miles (20.1 km).”

The system is designed to enable two astronauts a full day of lunar surface exploration. They could sleep and recover within the inflatable overnight habitat at a location away from the lunar base and then start a second day of exploration before returning to the base.

Schreiner and his colleagues underline that inflatable habitat must be lightweight, portable, have a low mass and a high deployed-to-stowed volume ratio. When connected to the ECLSS on a lunar rover via umbilical cables to maintain the atmosphere, the habitat should enable a pressurized environment in which astronauts could remove their suits and sleep. To make the system working it would be also needed to set up the solar shield and deploy the solar array.

The researchers reveal that the ECLSS would contain a carbon dioxide scrubber, a “slurper” to remove humidity, an oxygen tank for respiration, and a water tank for the sublimator, crew hydration, food preparation, hygiene or medical use. The solar array is needed to provide power for the overnight system and recharge the rover batteries for the second day of exploration.

On the eve of future manned Mars missions being developed by NASA, the proposed habitat looks like an interesting addition to every human exploration of different worlds. The main advantage of this project is the ability to significantly increase the exploration capabilities at relatively low cost. The system itself would be rather small, weighing just 124 kg and a volume of 594 liters. The scientists conclude that the project could enable single-outing missions to visit multiple locations to increase the scientific impact.