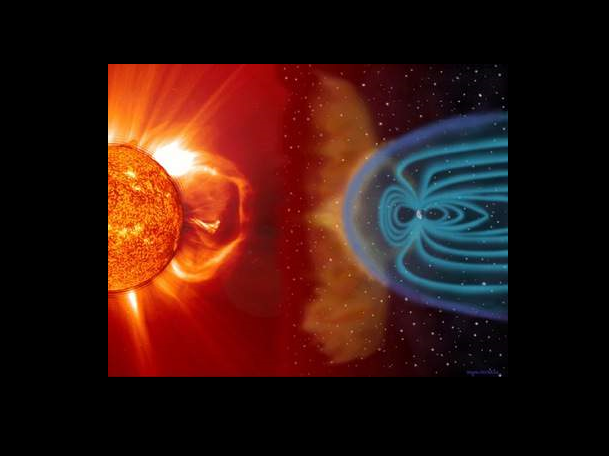 In case you didn't know, the universe is a terribly hostile place for most lifeforms. Take our own star, for example. The sun gives life to everything on Earth, but it is also a violent inferno (one that is capable of destroying all living things). Fortunately, for us, our planet has protection—it is surrounded by a magnetic force field. Okay, perhaps "force field" is a bit sensationalist, but the actual description is just as inspiring. The Earth is encased in a magnetic field, which is generated by the rotating, liquid iron core at the center of the planet (otherwise known as a "dynamo").

Ultimately, this magnetic shield protects life on our planet from utter annihilation.

What Our Magnetic Field Does:

We need this field because (occasionally) our sun will produce violent solar storms. Solar storms generally occur as a result of variations in the Sun’s magnetic field lines. When these field lines fluctuate, the matter they contain is released out into the solar system (and by “released,” I mean that it explodes from the Sun in a hellish firestorm). These super-heated particles blast from the Sun at speeds exceeding 600 miles per second (1,000 kms), and they can contain over 200 billion pounds of material (100 billion kilograms). This is bad news for anything that is in the path of the explosion. [su_pullquote align="left"][/su_pullquote]

In fact, our planet is constantly bombarded by a steady stream of high energy particles from the sun. In addition to this, we have cosmic rays (high energy particles that are mainly originating from outside the Solar System) striking our planet. Without Earth’s magnetic field, these cosmic storms and high energy particles would strip away our atmosphere, destroying our cellular structure and evaporating our oceans in the process. Luckily for us, we have our magnetic shield (the magnetosphere) to protect us from most of these harmful particles.

Of course, when the charged particles come into contact with the magnetosphere, they don’t disappear; they are merely deflected around the planet, forming what we call the "Van Allen radiation belts." These belts were first confirmed by a man named James Van Allen in 1958. At the time of their discovery, not many details were known about them, and they were the subject of great interest.  Today, an accurate understanding of them is crucial, as they are a threat to the man-made satellites that our society so heavily relies on,  and they also pose a threat to astronauts in orbit.

The high energy particles that form this belt can damage electronics (such as solar cells, sensors, and integrated circuits), and incapacitate satellites. In fact, orbiting technology, like the Hubble Space Telescope, regularly gets turned off as it passes through areas of high intensity. So in order to better understand these belts, in August of 2012, NASA launched the (aptly named) Van Allen probes. These probes constantly collect data, gathering valuable information as they spin and orbit our planet.

What Are The Van Allen Radiation Belts?

For 50 years, we thought that there were only two of these belts, but new research proves otherwise. The two previously known belts are the inner belt and and outer belt (admittedly, not very inspired names).  In total, they extend from about 1,000 km to 60,000 km (620 to 37,000 mi) above the Earth's surface.  The inner belt is made up of high energy electrons and positive ions (which form from decayed cosmic rays).  These particles are repulsed by our magnetic field, but they are trapped between the magnetic field and the outer layer. This inner layer is fast and chaotic, but sustains itself to almost 10,000 km (6,200 mi) from the surface of the planet.  The outer layer forms from a completely different process; here, there are mostly high energy electrons from the solar wind.

In 2013,  NASA discovered a third transient belt that exists in between these two belts. Researchers concluded this third layer must have been created by a powerful interplanetary shockwave, which itself was created during a coronal mass ejection (CME) from our sun.  The Van Allen probes discovered this layer after being operational for only 2 days, which is primarily why scientists initially thought that the data was a malfunction with the probes.

However, another powerful interplanetary shockwave (also created by a CME) hit us, and this completely obliterated the outer and middle layers of these belts, leaving only the immensely powerful inner layer. And just over a week later another interplanetary shockwave hit us, which restored the balance to our two layered system.  This whole process happened in a span of 4 weeks, and it took researchers completely by surprise.  It showed that solar activity generally determines the shape of these dynamic belts, and that (like most all things in the universe) the Van Allen Belts are far from static.

But more than that, the data from the probes essentially reveals that the world is an enormous, cyclic particle accelerator!  This happens because of immensely powerful, low frequency waves that are emanating from the Earth's magnetosphere (called "chorus waves").  This effect, and an observed process in the outer belt that operates in conjunction with chorus waves (called "double layers"), ends up accelerating particles to almost the speed of light.

On Chorus Waves and Double Layers:

Double layers are parallel layers of oppositely charged particles (electrons and protons) that pop in and out of existence and travel along the magnetic field lines.  They were discovered completely by chance, as the probes happened to travel through these layers.  7,000 of these double layers  were observed in a minute. In total, they generate a staggering 1 million volts (1 MeV).

Chorus waves are extremely intriguing, and they have been studied for over a decade.  They are able to create sound in radio wavelengths and have actually been observed in action by nearly everyone in the northern hemisphere, by the scattered low energy electrons in the the sky. The scattering produced by these low frequency waves is responsible for the "dancing" of the exquisite colors of the aurora.  Chorus waves were long theorized for being responsible for particle acceleration, and researchers now have data to go along with this theory.

Ultimately, it is imperative that researchers understand this three-zone structure, and model it accurately, in order to ensure the safety of our equipment and our astronauts. Accurate models can also give us better predictions for how bad space weather will impact us. So here's to many more years of the Van Allan probes.