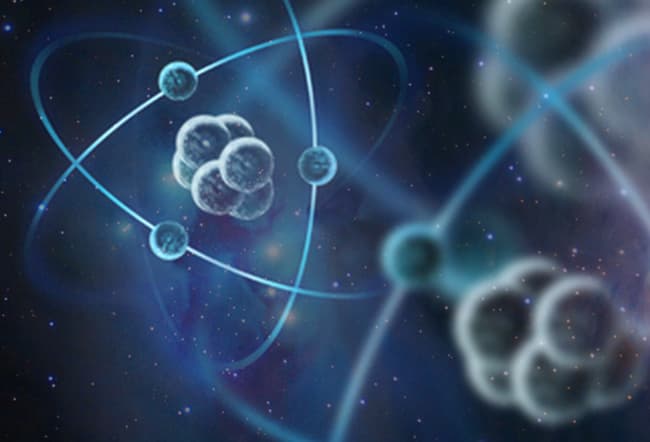 The emptiness of the universe: This is the kind of stuff that the early pioneers in quantum mechanics believed in. In the 1920's, researchers thought that emptiness -- an absence of stuff -- is what quantum mechanics was talking about. Arthur Eddington's "The Two Tables" is a really nice treatment of the subject. In this piece, Eddington essentially argues that there are two tables: First, there is the table of everyday experience. It is a table that we can see and interact with. It is comparatively permanent, it is coloured, and (above all) it is substantial. Second, there is the table of science. This is something that is intangible. It is mostly emptiness with numerous, sparsely-scattered electric charges rushing about with great speed.

However, this metaphor happens to be wrong.

The atom is a crazy soup of electrons, positrons, quarks, photons, gluons, and so on. These are popping about and annihilating one another. It just happens that they are so evenly cancelled out that the "empty space" picture, which was given to us by the 1920's quantum mechanics, describes it extremely well. However, this emptiness is not an accurate depiction of what is actually going on. The deviations, that we can test, go into Quantum Field Theory.

What people living in the 1920's did not realize is that the "empty space + Coulomb's potential" is actually not empty space at all. In short, "empty space" is not what we think it is -- it is a soup of a lot of things that average out to zero. Like thermodynamic equilibrium, i.e. "no net flow" is nowhere near the same as "no flow" at all!

Quantum Electrodynamics (QED) is the one quantum field theory (QFT) that is so well-tested that it truly is mind-blowing. It has more than 10 significant digits. No other enterprise of human ingenuity comes close to QED in terms of experimental testing and predictive power/closeness to predictions. It does this so well that the Standard Model is actually built on top of QED.

So, if you read a textbook that gave you the empty space version of the universe, that textbook needs updating. I am very sorry that the scientific community is not overly adept at distributing the truths that we have discovered, even if that truth is an inconsequential modification (or clarification) of what had been said earlier.

WATCH: Empty Space is NOT Empty