Scientists Found a Way to Create Millions of Virtual Universes

Their study contradicts what we thought we knew about galactic evolution. 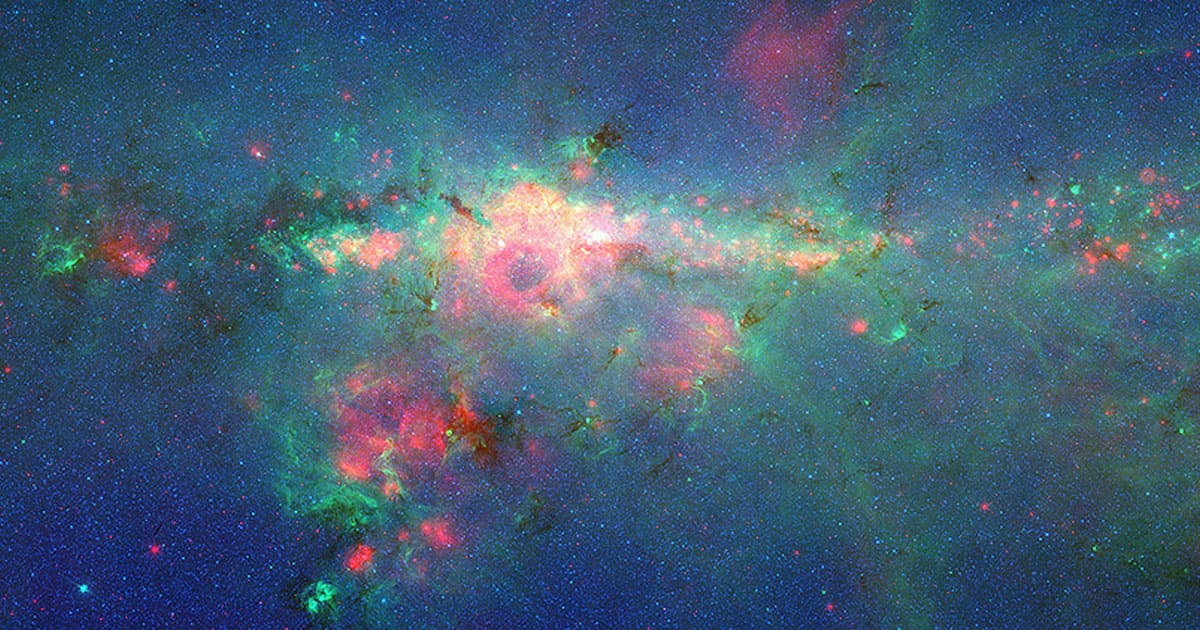 Scientists used a supercomputer to simulate the creation and evolution of 8 million virtual universes, each containing 12 million galaxies — and in the process, they discovered something new about the universe we actually live in.

Galaxies use hydrogen gas to form stars, but some galaxies stop creating new stars even though they still have plenty of hydrogen gas. Previously, scientists attributed this to a combination of factors.

For one, they thought the supermassive black holes at the centers of the galaxies might be producing too much energy for the hydrogen to cool to star-forming temperatures, with supernovae explosions adding to the inferno.

Dark matter could play a role, too, as its gravitational pull on the hydrogen gas would cause its temperature to rise.

"As we go back earlier and earlier in the universe, we would expect the dark matter to be denser, and therefore the gas to be getting hotter and hotter," researcher Peter Behroozi said in a press release. "This is bad for star formation, so we had thought that many galaxies in the early universe should have stopped forming stars a long time ago."

But through their supercomputer-enabled universe simulations, which they detail in a study published in the journal Monthly Notices of the Royal Astronomical Society, the researchers found that wasn't the case.

Only when they tweaked their simulations to allow early galaxies to continue efficiently forming stars for longer did those galaxies evolve to form virtual universes that look like our real one.

"In other words, we are forced to conclude that galaxies formed stars more efficiently in the early times than we thought," Behroozi said. "And what this tells us is that the energy created by supermassive black holes and exploding stars is less efficient at stifling star formation than our theories predicted."

This is the first study to accurately simulate such a large section of our universe — but even its 12 million galaxies are just a fraction of the upwards of one hundred billion galaxies astronomers believe populate the actual universe.

Still, with supercomputers getting more powerful all the time, it might not be long before scientists are able to simulate the creation of our entire universe — and perhaps solve even more of its mysteries in the process.

Read This Next
Bangs and Bounces
Scientists Say Stuff Might Have Been Happening Before the Big Bang
Space Lumps
Scientists Say We May Be Extremely Wrong About the Universe
Woooaaah
Scientists: The Human Brain Has Odd Similarities to the Entire Universe
Really Really Really Old
Astronomers Puzzled By Ancient Milky Way-Like Galaxy 12 Billion Light-Years Away
Massive Gravity
New Theory Could Solve Universe’s Biggest Paradox
More on Hard Science
Warped Tour
Feb 2 on futurism
Professor Believes Door to Warp Drive May Lie With Ethylene Glycol
Sky Bursts
Feb 2 on the byte
Astronomers Intrigued by 25 Mysterious Repeating Radio Signals From Deep Space
Tractor Beam
Jan 26 on the byte
Scientists Build Working Tractor Beam, Although It's Comically Tiny
READ MORE STORIES ABOUT / Hard Science
Keep up.
Subscribe to our daily newsletter to keep in touch with the subjects shaping our future.
+Social+Newsletter
TopicsAbout UsContact Us
Copyright ©, Camden Media Inc All Rights Reserved. See our User Agreement, Privacy Policy and Data Use Policy. The material on this site may not be reproduced, distributed, transmitted, cached or otherwise used, except with prior written permission of Futurism. Articles may contain affiliate links which enable us to share in the revenue of any purchases made.
Fonts by Typekit and Monotype.