Scientists Aim to Bring Extinct Tiger Species Back to Life

This effort could restore many lost species. 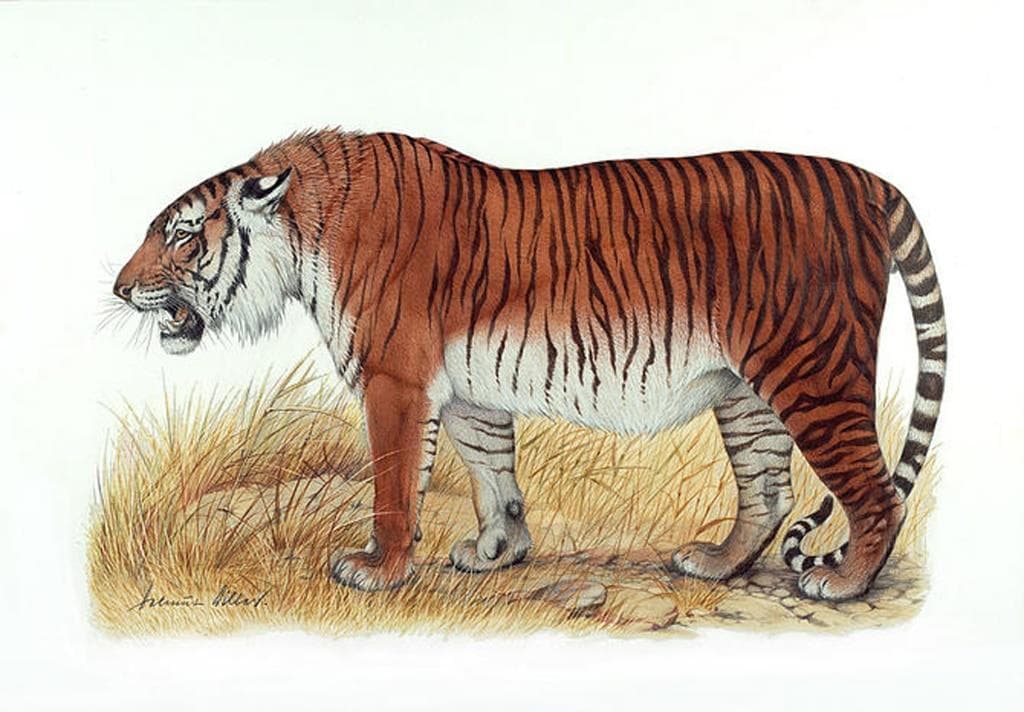 The Reintroduction of a Species

The Caspian tiger, Panthera tigris virgata, went extinct in the 1960s. Their numbers dwindled due to poaching, habitat loss, and food shortages. The former Soviet Union once offered rewards for poisoning and trapping these animals, and irrigation projects demolished the tiger's habitat which spanned from Turkey to Iraq and Iran and into parts of Northwestern China.

Now, scientists at the World Wildlife Fund (WWF) and related organizations have taken notice of this species. In a study published in the journal Biological Conservation, conservation scientists provide plans to bring back the extinct tiger and reintroduce it by using a close relative, the Siberian tiger. "Caspian and Amur (Siberian) tigers are one in the same," said Carlos Driscoll, WWF Chair in Conservation Genetics at the Wildlife Institute of India. "The tigers are too closely related to be a separate subspecies." Even with the use of a slightly different animal, they envision the tigers evolving into the same (or similar) species over time.

The authors of the study stated that the Siberian Tiger's "phenotype proves adaptable to the arid conditions of the introduction site." This means that while the Siberian tiger is predominantly found in Russia's birch forests, the reintroduction sites in Central Asia would have a similar habitat where the tiger could easily adapt to the environment.

This choice of habitat was dependent on the amount of people that use the land, and so the Ili River delta and the southern coast of Balkhash Lake were chosen as suitable locations. The tigers' main prey would consist of wild boar, Bukhara deer, and roe deer. But before reintroduction could really take effect, these prey species need to be brought up to "sustainable levels," which could take anywhere from 5 to 15 years. Scientists would also have to see if humans and tigers could coexist in the area together.

This process is slow but promises to be rewarding. If 40 tigers are introduced, then we could see upwards of 100 tigers in about 50 years. With the Siberian tiger classified as an endangered species, the addition could be crucial to the survival of the species.

The Fate of a Species

The survival of this tiger species is a race against the clock. Macrofauna are reaching critically low numbers, with even cheetah moving down the IUCN red list of threatened species from 'vulnerable' to 'endangered.' It is estimated that the animals lost are 1,00 to 10,000 times the average extinction rate, with dozens of species going extinct every single day.

So why would it matter for us to bring back one tiger species when so many other species are critically endangered and facing extinction? One might wonder what conservation efforts are most important, rather than trying to turn back time for a tiger that met its demise decades ago.

But there is hope. A partnership between the government of Kazakhstan and WWF devised a conservation project for the tigers, and it's not purposed for their survival alone. A national park would be created, natural woodland habitat revived, and a resulting increase of flora and fauna.

Researchers are hopeful that the tigers' reintroduction would provide conservation framework for many other species in the future. And there is no better time than now.

Read This Next
It's Baaack!
Scientists Thought This Creature Was Extinct For 30 Years. Then It Returned.
Futurism
The Last Male Northern White Rhino Is Dead, but the Subspecies Could Still Survive
Futurism
To Combat Wildlife Trafficking, Tech Companies Take a Stand
Futurism
Losing Biodiversity Could Lead to "Extinction Cascades"
Futurism
Climate Change Could Wipe Out One-Third of Parasite Species by 2070
More on Earth & Energy
The Brunt of It
7:07 PM on the byte
Iceberg Twice the Size of New York City Breaks Off Antarctica
Doomscrolling
Yesterday on the byte
Scientists Say We're Closer to Nuclear Armageddon Than Any Other Point in History
Putting a Spin on It
Yesterday on the byte
Earth's Core Appears to Have Stopped Spinning, Scientists Say
READ MORE STORIES ABOUT / Earth & Energy
Keep up.
Subscribe to our daily newsletter to keep in touch with the subjects shaping our future.
+Social+Newsletter
TopicsAbout UsContact Us
Copyright ©, Camden Media Inc All Rights Reserved. See our User Agreement, Privacy Policy and Data Use Policy. The material on this site may not be reproduced, distributed, transmitted, cached or otherwise used, except with prior written permission of Futurism. Articles may contain affiliate links which enable us to share in the revenue of any purchases made.
Fonts by Typekit and Monotype.