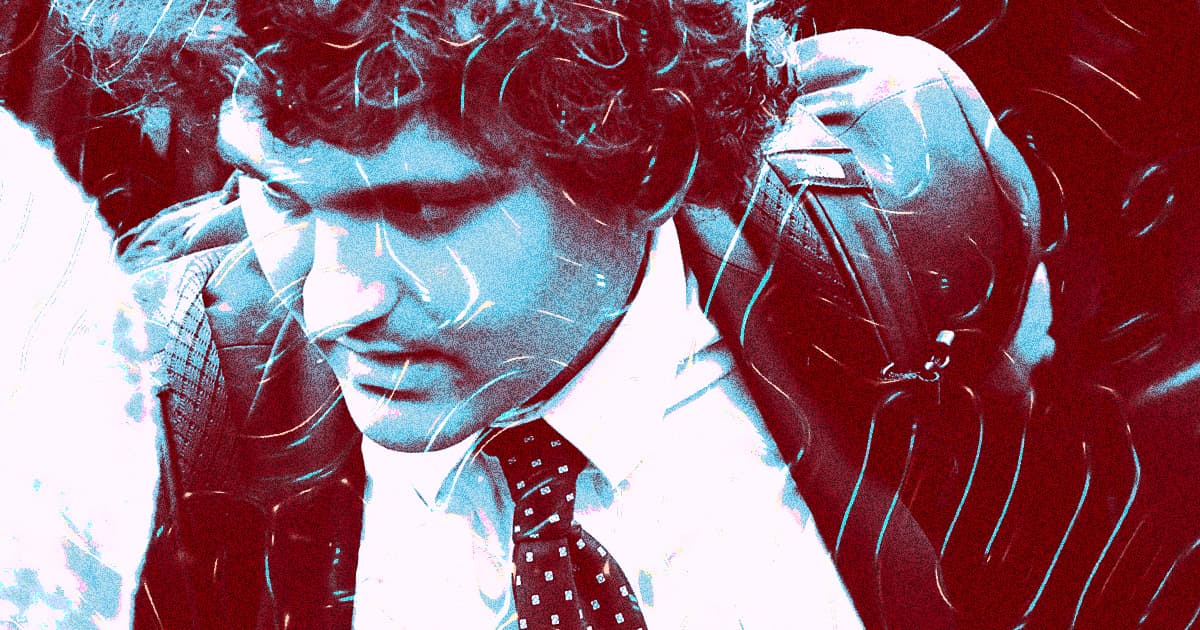 According to a former ranking FTX exec, the exchange's founder and disgraced CEO Sam Bankman-Fried was — shall we say — quite unpleasant to work with.

In a marathon 49-tweet thread, former FTX US president Brett Harrison said that his tenure at the now-failed crypto exchange was only 17 months long, but during that time, he experienced the worst of the now-house-arrested SBF's moodiness.

"My first few months at FTX US were wonderful," the developer — who, it should be noted, was recently the recipient of an investment from extremely shortlived Donald Trump spokesperson Anthony Scaramucci — tweeted. "I worked largely independently of Sam to grow a US-based team and foster a professional environment prepared for regulated businesses."

Just six months into his time at the helm of the US operation, he added, "pronounced cracks began to form in my own relationship with Sam" when he began "advocating strongly" for greater legal separation between the US and Bahamas-based arms.

"I saw in that early conflict his total insecurity and intransigence when his decisions were questioned, his spitefulness, and the volatility of his temperament," Harrison wrote, saying that Bankman-Fried, who he'd worked with at the Jane Street trading firm in New York, "wasn’t who I remembered."

It's at this point in the thread that Harrison begins to cast serious aspersions on his ex-boss, insinuating that SBF may have been struggling with "addiction" or "mental health problems."

"There was tremendous pressure not to disagree with Sam, but I did so anyway," the ex-FTX exec wrote, adding that Bankman-Fried's control over the company image seemed nearly absolute.

"Standing up to an insecure, prideful manager is hard under any circumstance," Harrison added. "But it’s nearly impossible when every day, every major voice of culture and commerce deafens you with a narrative that implies if you disagree with your manager *you* clearly must be wrong."

Harrison said that he wasn't the only person at FTX who disagreed with the big boss and that collectively, the experience of being dismissed was "extremely frustrating." Still, SBF's response, the former FTX US president claims, was to sideline him and others who disagreed and make decisions behind their backs.

"Sam was uncomfortable with conflict," he continued. "He responded at times with dysregulated hostility, at times with gaslighting and manipulation, but ultimately chose to isolate me from communication on key decision-making."

Things came to a head in April 2022, a month shy of Harrison's year anniversary at FTX, when he decided to make a last-ditch effort to effect change in spite of SBF. He said he wrote a formal complaint about the problems he saw with the company and threatened to resign if they weren't ameliorated — and was, allegedly, threatened right back "on Sam's behalf" with being fired and having his reputation destroyed.

"I was instructed to formally retract what I’d written," Harrison wrote, "and to deliver an apology to Sam that had been drafted for me."

That exchange "solidified" Harrison's decision to leave FTX, but because he didn't want to hurt the company itself or the people under him, he opted to "gradually" wind down and ultimately left in September, before the exchange's industry-shaking crash in November.

In spite of being aware of a number of structural issues, Harrison said he was shocked to learn of the alleged fraud underlying the exchange, which he said was "carefully concealed" from him and others at the American arm because they likely would have gone public with it.

"It’s clear from what has been made public that the scheme was held closely by Sam and his inner circle at FTX.com and Alameda," he wrote, "which I was not a part of, nor were other executives at FTX US."

Harrison went on to dismiss the "frenzied and baseless accusations" made against him and circulated on social media, including that his resignation just a few months prior to the November crash suggested he had prior knowledge of the alleged fraud at its heart or that he's "seeking a plea deal."

While Harrison has obviously made some baseless speculations of his own — including, perhaps most importantly, that SBF might have suffered from either drug addiction, mental illness, or both — his story is pretty harrowing, and would help explain why nobody blew the whistle before the entire house of cards came falling down.

If nothing else, it adds to the growing body of knowledge about what the hell happened at FTX — and, hopefully, will help those who follow in its footsteps avoid such major alleged malfeasance.

Read This Next
Beanbag Chair Musings
Sam Bankman-Fried, Bored on House Arrest, Starts a Substack
Old School
FTX's New CEO Says Company Did "Old Fashioned Embezzlement"
Locked Up
Sam Bankman-Fried Arrested in Bahamas, Facing US Criminal Charges
Sometimes You Winkleviin, Sometimes You Winklevose
Former Employees Say Problems Were Obvious at the Winklevoss' Exchange Before It Paused Withdrawals
A Lesson in Digging Your Own Grave
An Interviewer Asked Sam Bankman-Fried If He'd Been Honest and His Answer Was Bizarre
More on Blocknik
Girlbosses
Wednesday on the byte
"Cryptoqueen" Accused of Stealing Billions Suddenly Surfaces
Their Minds...
Jan 28 on the byte
Business Geniuses at Amazon Hard at Work on Hot New Idea: NFTs
Floored Apes
Jan 27 on the byte
Yuga Labs Says Its Bored Apes Are Absolutely Copyrighted, Thank You Very Much
READ MORE STORIES ABOUT / Blocknik
Keep up.
Subscribe to our daily newsletter to keep in touch with the subjects shaping our future.
+Social+Newsletter
TopicsAbout UsContact Us
Copyright ©, Camden Media Inc All Rights Reserved. See our User Agreement, Privacy Policy and Data Use Policy. The material on this site may not be reproduced, distributed, transmitted, cached or otherwise used, except with prior written permission of Futurism. Articles may contain affiliate links which enable us to share in the revenue of any purchases made.
Fonts by Typekit and Monotype.