Russia Says It's Quitting the ISS, But It's Also Testing a New ISS Module

The module has been decades in the making. 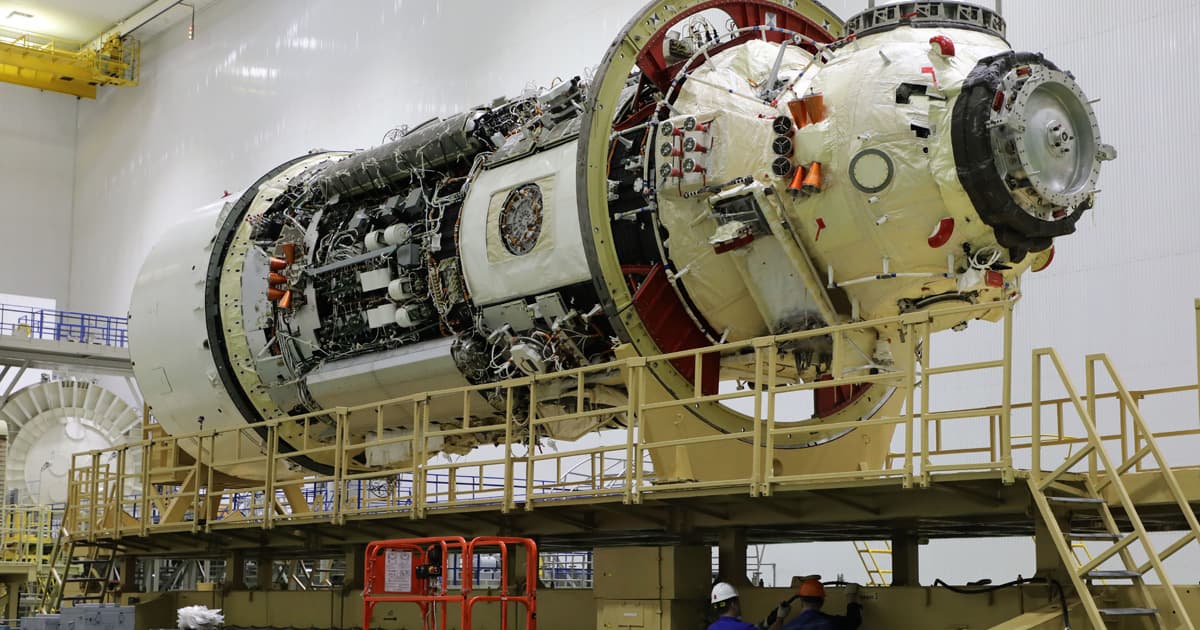 Russian space agency Roscosmos has announced that it has begun vacuum testing a new module intended to build out the Russian segment of the International Space Station — a strange choice in light of Russia's recent decision to ditch the ISS for its own upcoming space station.

The agency's Multipurpose Laboratory Module (MLM), also known as the Nauka (that's Russian for "Science") segment, has been in development for over a decade.

It was originally meant to launch in 2007 and orbit the Earth alongside Zarya, the first-ever module of the ISS to be launched, and Zvezda, the Russian segment's service module. The launch, however, has been delayed significantly several times.

Now, Russia appears to have renewed its efforts to launch the Nauka module after all.

At 43 feet long, and a weight of more than 20 metric tons, the module represents the largest of its kind to be launched since Zvezda, which was launched in 2000. Its primary purpose is to build out Russia's scientific research capabilities in orbit.

It's an interesting moment for Russia's space program. Roscosmos recently confirmed that it is officially leaving the International Space Station after 20 continuous years of international occupation of the aging outpost.

Russia also recently showed off the construction of the first module of its own planned space station, set to launch within this decade.

But despite signaling the country's abandonment of the space station, Roscosmos director general Dmitry Rogozin called the MLM segment "an integral part of the Russian segment of the ISS" last month.

During the recent tests, scientists at Roscosmos filled the Nauka segment with a helium mixture and placed it in a massive vacuum chamber, according to an update, to test whether it's sufficiently airtight.

It's an important step for any module meant to house astronauts. In fact, crew members on board the ISS found a leak on the 20-years-old Zvezda module last year, requiring them to seal it with a special glue.

Fortunately, according to both NASA and Roscosmos, astronauts were never in danger. In December, however, Roscosmos was preparing to ship additional oxygen reserves to stop air pressure from dropping on board the station.

Big picture, Russia appears to be working on two space station modules at the same time. One is meant to renew the country's commitments to a decades-long international collaboration in orbit, while the other embodies Russia's desires to establish its own outpost.

In many ways, Russia is distancing its space ambitions from those of the West. For instance, the country recently announced that it was partnering with China on a much smaller outpost orbiting the Moon after turning down NASA and its European partners to establish the Gateway, a similar lunar outpost.

It will be interesting to see what the launch of the Nauka segment will signify for the near future of the International Space Station. Even US support for the aging station has been challenged recently, with Congress only reluctantly renewing its support late last year.

After all, Russia launched the first building block of the International Space Station — and there's a chance it will be the last country to do as well.

Despite its age, the ISS still represents a great opportunity to explore what life could look like beyond Earth's atmosphere — and teach us valuable lessons about life on Earth as well.

But with waning support, major world powers are now looking for their next scientific platform.

Read This Next
Sabers Rattled
Russia Issues Veiled Threat to Shoot Down Pesky SpaceX Satellites
God Shot
Astronaut Says He Had Religious Experience During Spacewalk
Don't let the door hit you
Elon Musk Lobs Casual Space Station Burn at Moscow
Sad ROSS
Russia's New Space Station Gets Sadder the More We Hear About It
Buh Bye
Russia Says It's Definitely Quitting the ISS But Doesn't Say When Exactly
More on Off World
Grrrrrrrr
Yesterday on the byte
Internet Erupts as NASA Spots Cartoon Bear on Surface of Mars
Gl1tc4
Yesterday on the byte
NASA Says Another James Webb Instrument Has Suffered a Glitch
comet Spotting
Yesterday on the byte
Behold! Dazzling Green Comet Approaches
READ MORE STORIES ABOUT / Off World
Keep up.
Subscribe to our daily newsletter to keep in touch with the subjects shaping our future.
+Social+Newsletter
TopicsAbout UsContact Us
Copyright ©, Camden Media Inc All Rights Reserved. See our User Agreement, Privacy Policy and Data Use Policy. The material on this site may not be reproduced, distributed, transmitted, cached or otherwise used, except with prior written permission of Futurism. Articles may contain affiliate links which enable us to share in the revenue of any purchases made.
Fonts by Typekit and Monotype.