What they found could make the next black hole image way crisper. 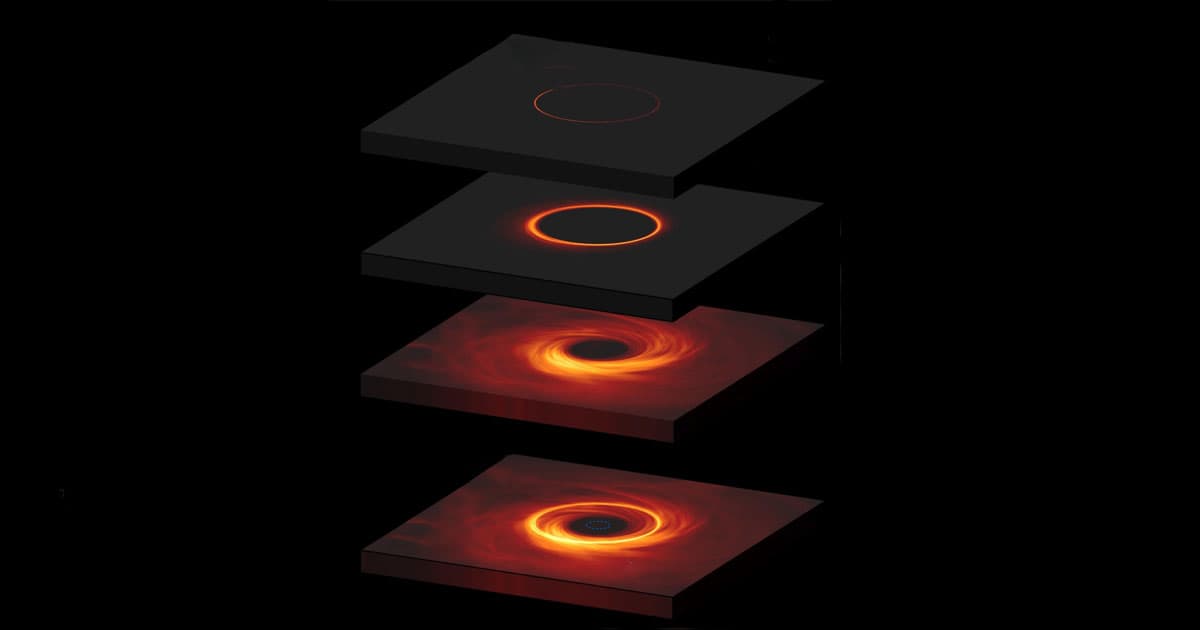 Last April, the international coalition of scientists who run the Event Horizon Telescope (EHT), a network of eight telescopes from around the world, revealed the first-ever image of a black hole.

Now, a team of researchers at the Center for Astrophysics at Harvard have revealed calculations, as detailed in a paper published in the journal Science Advances today, that predict an intricate internal structure within black hole images caused by extreme gravitational light bending.

The new research, they say, could lead to much sharper images when compared to the blurry ones we've seen so far.

"With the current EHT image, we've caught just a glimpse of the full complexity that should emerge in the image of any black hole," said Michael Johnson a lecturer at the Center for Astrophysics, in a statement.

The EHT image was able to catch the black hole's "photon sphere" or "photon ring," a region around a black hole where gravity is so overpowering, it forces photons to travel in orbits.

But as it turns out, there's even more to the image.

"The image of a black hole actually contains a nested series of rings," Johnson said. "Each successive ring has about the same diameter but becomes increasingly sharper because its light orbited the black hole more times before reaching the observer."

Until last year, that internal structure of black holes remained shrouded in mystery.

"As a theorist, I am delighted to finally glean real data about these objects that we've been abstractly thinking about for so long," Alex Lupsasca from the Harvard Society of Fellows said in the statement.

These newly discovered substructures could allow for even sharper images in the future. "What really surprised us was that while the nested subrings are almost imperceptible to the naked eye on images — even perfect images — they are strong and clear signals for arrays of telescopes called interferometers," Johnson added.

"While capturing black hole images normally requires many distributed telescopes, the subrings are perfect to study using only two telescopes that are very far apart," Johnson said. "Adding one space telescope to the EHT would be enough."

There might be other ways as well. In November, a team of Dutch astronomers suggested sending two to three satellites equipped with radio imaging technology to observe black holes at five times the sharpness of the last attempt.

More on EHT: Explained: Why the Next Black Hole Image Will Be Incredible

Read This Next
Falling In
Objects We Thought Were Black Holes May Actually Be Wormholes, Scientists Say
Black Hole Snapshot
Scientists Release Image of Black Hole at Center of Our Galaxy
Sucking Atmospheres
Scientists Spot Ravenous "Vampire" Star Devouring Its Neighbor
Yuge
Scientists Discover Enormous Black Hole Right Near Our Galaxy
Star War
Scientists Are Trying to Figure Out How to Kill Stars with Black Holes
More on Hard Science
Tractor Beam
Thursday on the byte
Scientists Build Working Tractor Beam, Although It's Comically Tiny
Having a Blast
Jan 18 on the byte
New Study Shows Where You Should Hide to Survive a Nuclear Attack
Offworld Amino
Jan 15 on the byte
Scientists Find Building Blocks of Life in Meteor That Smashed Into Family's Driveway
READ MORE STORIES ABOUT / Hard Science
Keep up.
Subscribe to our daily newsletter to keep in touch with the subjects shaping our future.
+Social+Newsletter
TopicsAbout UsContact Us
Copyright ©, Camden Media Inc All Rights Reserved. See our User Agreement, Privacy Policy and Data Use Policy. The material on this site may not be reproduced, distributed, transmitted, cached or otherwise used, except with prior written permission of Futurism. Articles may contain affiliate links which enable us to share in the revenue of any purchases made.
Fonts by Typekit and Monotype.