We thought it was 700 times larger than the Sun. But it's way bigger. 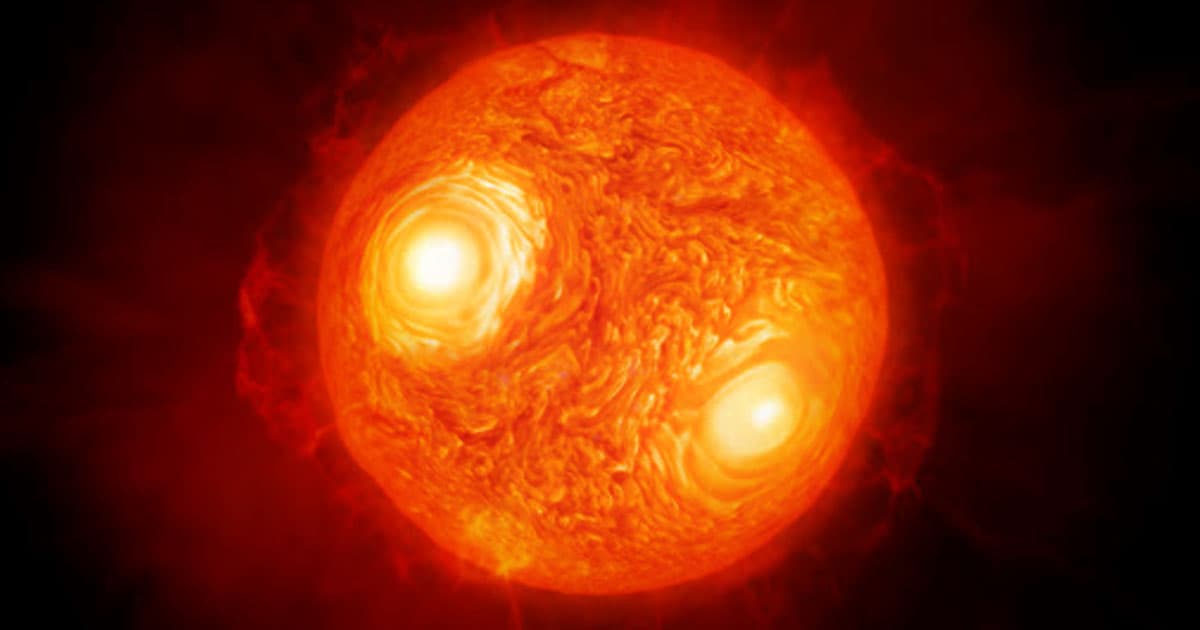 An international team of researchers has found that the red supergiant star Antares is even more gigantic than initially thought, Space.com reports.

Previous research found that Antares, which is located about 550 light-years away in the Scorpius constellation, is about 700 times larger than the Sun — but that number increases dramatically when mapped in a different spectrum.

"The size of a star can vary dramatically depending on what wavelength of light it is observed with," Eamon O’Gorman, astronomer at the Dublin Institute for Advanced Studies and lead author of a new study about the project published in the journal Astronomy & Astrophysics this week, said in a statement.

"The longer wavelengths of the [Very Large Array] revealed the supergiant’s atmosphere out to nearly 12 times the star’s radius," O'Gorman added.

The team used the latest readings from both the Very Large Array combined with the Atacama Large Millimeter/submillimeter Array to study Antares' atmosphere — and, in the process assembled the most detailed map in existence of any star besides our Sun.

Supergiant red stars are the largest stars found in the universe in terms of volume, but not mass. They're relatively cool and form from stars that start to collapse in on themselves. Once their time is up, they collapse into a supernova.

“We found that the chromosphere is ‘lukewarm’ rather than hot, in stellar temperatures,” O’Gorman explained. "The difference can be explained because our radio measurements are a sensitive thermometer for most of the gas and plasma in the star’s atmosphere, whereas past optical and ultraviolet observations were only sensitive to very hot gas and plasma."

By scrutinizing the star's chromosphere, they could even tell where winds on its surface start from.

"Knowing the actual sizes and temperatures of the atmospheric zones gives us a clue of how these huge winds start to form and how much mass is being ejected," co-author Graham Harper of the University of Colorado said in the statement.

More on red giants: Giant Star Betelgeuse May Have Eaten a Smaller Companion

Read This Next
Betelgeuse Betelgeuse Betelgeuse
Astronomers: This Star Isn't As Giant As We Thought, Just Closer
Red Giant Mystery
Did This Planet Survive Getting Swallowed By Its Sun?
More on Hard Science
Tractor Beam
Jan 26 on the byte
Scientists Build Working Tractor Beam, Although It's Comically Tiny
Having a Blast
Jan 18 on the byte
New Study Shows Where You Should Hide to Survive a Nuclear Attack
Offworld Amino
Jan 15 on the byte
Scientists Find Building Blocks of Life in Meteor That Smashed Into Family's Driveway
READ MORE STORIES ABOUT / Hard Science
Keep up.
Subscribe to our daily newsletter to keep in touch with the subjects shaping our future.
+Social+Newsletter
TopicsAbout UsContact Us
Copyright ©, Camden Media Inc All Rights Reserved. See our User Agreement, Privacy Policy and Data Use Policy. The material on this site may not be reproduced, distributed, transmitted, cached or otherwise used, except with prior written permission of Futurism. Articles may contain affiliate links which enable us to share in the revenue of any purchases made.
Fonts by Typekit and Monotype.