A radical new theory argues that Pluto harbors a vast underground ocean of water, like Earth — and even, possibly, life. 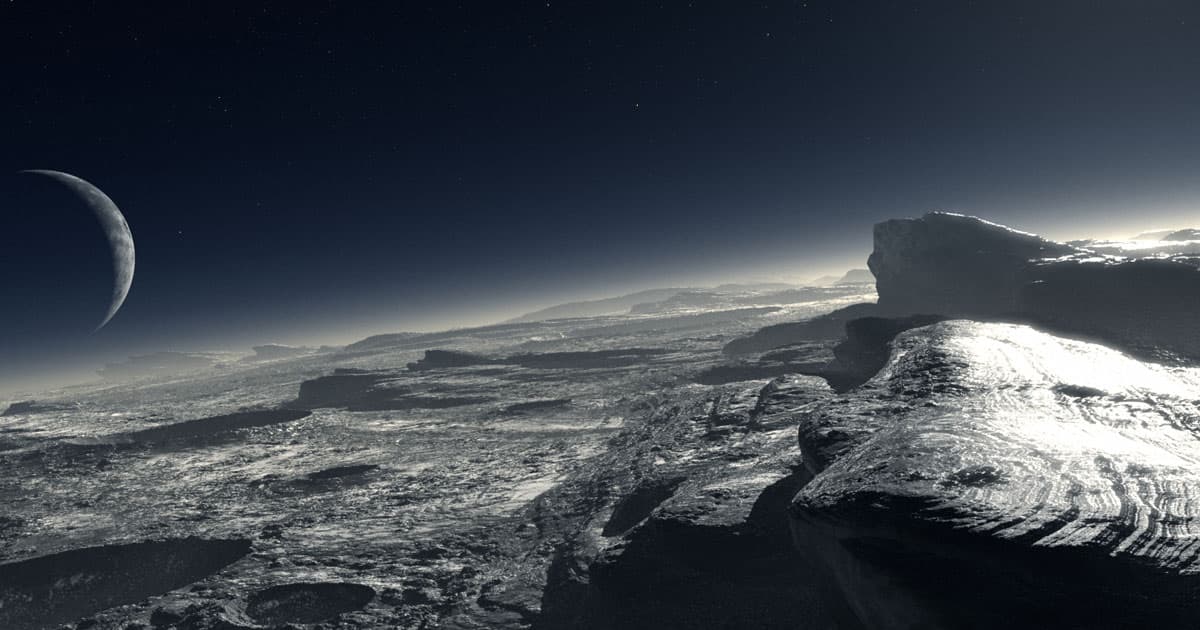 According to new research, the frozen dwarf planet Pluto may have started its life as a hot world with a massive underground ocean of liquid water — suggesting, tantalizingly, that it could have harbored life.

Until now, Pluto was widely believed to be a giant boulder of ice, shielded from the Sun's radiation thanks to the sheer distance from its star. But new evidence, scientists say, suggests that it once had a liquid ocean — and that it may still be there, under its frozen surface.

"Even in this cold environment so far from the Sun, all these worlds might have formed fast and hot, with liquid oceans," Carver Bierson, UC Santa Cruz graduate student and first author of a new paper about the work published Monday in the journal Nature Geoscience, said in a statement.

The researchers suggest that the process of Pluto accreting matter may have generated sufficient heat to allow a subsurface ocean to form.

"For a long time people have thought about the thermal evolution of Pluto and the ability of an ocean to survive to the present day," co-author Francis Nimmo, professor of Earth and planetary sciences at UC Santa Cruz, said in the statement. "Now that we have images of Pluto's surface from NASA's New Horizons mission, we can compare what we see with the predictions of different thermal evolution models."

The hot and cold start scenarios of Pluto's evolution would result in the planet's surface looking quite different at present day, the scientists argued.

"We see lots of evidence of expansion, but we don't see any evidence of compression, so the observations are more consistent with Pluto starting with a liquid ocean," Bierson added.

Whether Pluto has stayed warm enough to allow this ocean to remain liquid is another question. Bierson calculated that gravitational energy released by new material hitting the planet's surface in its early days would be enough. But that energy would end up radiating away over time.

"How Pluto was put together in the first place matters a lot for its thermal evolution," Nimmo said. "If it builds up too slowly, the hot material at the surface radiates energy into space, but if it builds up fast enough the heat gets trapped inside."

If it took less than 30,000 years, according to his calculations, Pluto would have had a "hot start." But if it took millions of years, sadly, that hot start would be almost impossible.

Read This Next
Into Darkness
Inside NASA's Bold Proposal to Probe the Mysteries of Dark Matter
Martian Ammonia
NASA Rover Detects Organic Molecules on the Surface of Mars
Myanus, Hisanus, Heranus...
Here's What Uranus Scientists Think About Your Disgusting Jokes
Joseph Strikes Again
Experts Shred Paper Claiming to Identify Mushrooms on Mars
Mars Shrooms
Extremely Dubious Research Claims to Spot Fungus Growing on Mars
More on Hard Science
Moon Sims
Yesterday on futurism
Brutal Video Simulates When Earth Hit Another Planet Many Years Ago
Total Drama Island
Sep 28 on the byte
Journal Retracts Study on Room Temperature Superconductors
Tell Us How You R...
Sep 27 on the byte
Former Particle Physicist Absolutely Annihilates the Field of Particle Physics
READ MORE STORIES ABOUT / Hard Science
Keep up.
Subscribe to our daily newsletter to keep in touch with the subjects shaping our future.
+Social+Newsletter
TopicsAbout UsContact Us
Copyright ©, Camden Media Inc All Rights Reserved. See our User Agreement, Privacy Policy and Data Use Policy. The material on this site may not be reproduced, distributed, transmitted, cached or otherwise used, except with prior written permission of Futurism. Articles may contain affiliate links which enable us to share in the revenue of any purchases made.
Fonts by Typekit and Monotype.