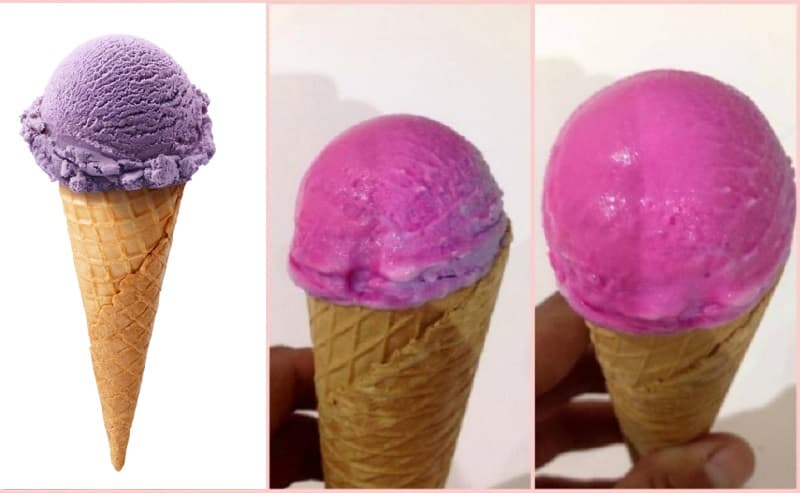 Ice cream has been a summer staple for millenia (literally). The history of this product dates back an amazing 2,200 years—to at least 200 BCE, when an ice cream-like treat was first served in China. This early frozen dessert was made from a mixture of rice and milk, which was tightly packed together in snow. Since this time, individuals have been working to perfect ice cream (by adding other flavors, mixing in nuts and chocolate, and trying all sorts of concoctions). Now, it seems that we just took another great leap towards making the ultimate ice cream.

Manuel Linares, a Spanish physicist, turned cook, recently invented a kind of ice cream that changes colors as you lick it. He calls it "Xamaleón."

The name is meant to pay homage to “chameleons;” these are a highly specialized branch of lizards, many species of which have the ability to change color (just like Linares' ice cream). The particular ice cream developed by Linares changes from periwinkle (a mix of blue and purple) to pink when it is licked. In the top image, you can see what the color initially looks like compared to what it looks like after it has been served and partially consumed. Ultimately, the color change process operates as a result of changes in temperature coupled with chemical interactions brought on by contact with the acids that are found inside the human mouth.

Unfortunately, we won't have a full detail of the ingredients until Linares has secured a patent for this invention, which is currently pending. However, we know that Linares ice cream is made from all the traditional ingredients (strawberries, banana, vanilla, and almonds) and what Linares calls a "love elixir" (I know; it's a strange name, but I didn't choose it). This elixir is sprayed onto the ice cream after it is placed in the cone in order to help accelerate the reaction. The specific ingredients  found in this elixir are currently under lock and key.

So, how does a physicist become an ice cream creator? Apparently, Linares wanted to do more with his life that be a physics professor, so he decided to take some classes at the Hotel Business School, Hoffman, in Barcelona. As it turns out, one of these classes was an ice cream class. It was in this course that Linares was first asked to create a new flavor of ice cream. Linares states: "When he [the instructor] asked me what type I was going to make, I said "one that changes colour." Everyone laughed, but as a physicist I know that there are various possibilities that might work and I was delighted when I managed to crack it and create an ice cream the changes colour.”

Fortunately, you can already purchase this ice cream. It is for sale in Linares own ice cream store, IceXperience. Unfortunately, the store is located in Linares hometown, in Blanes, Spain. There are plans for expanding his market though no official timeline on when this will take place. Moreover, Linares has plans for more wacky ice cream in the future. Up next, he hopes to create an ice cream that will be made with Peruvian and African medicinal plants, and which will provide an aphrodisiac effect.