A Photon's Million-Year Journey From the Center of the Sun 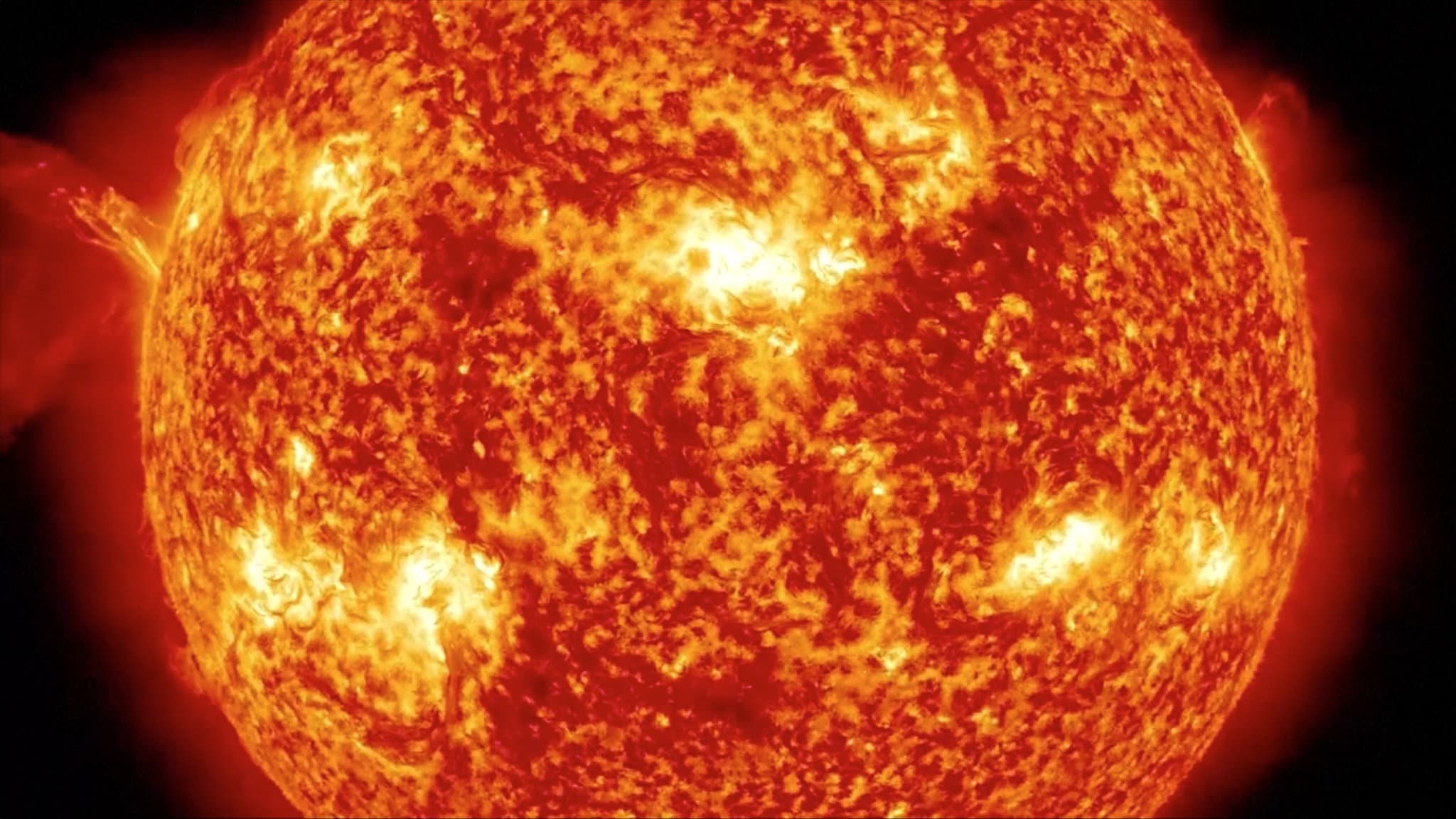 It's a well-known fact that the light we see from stars has taken hundreds, even thousands, of years to reach us. The photons made in the centers of these distant stars have traveled across enormous expanses of space and time in order to enter our retinas. But what about the light made in our own Sun? What do those photons experience on their way to the Earth?

Let's chart the journey of a single photon:

Our photon was produced in the core of the Sun: where the densities and temperatures—which can reach 15 million °C (27 million °F)—are high enough to sustain nuclear fusion. The hydrogen atoms that make up most of the Sun's mass have too much energy to stay together, so they split into their component parts: protons and electrons—creating plasma.

When two protons collide inside this high-energy plasma, they bond, ultimately creating a deuterium atom, as well as releasing a neutrino and a positron. If another proton collides with a deuterium atom, they form a helium-3 nucleus and release a gamma ray. This gamma ray is our photon, albeit an extremely energized one. After the photon is created, two helium-3 nuclei can combine to create a helium-4 nucleus, and two protons.

This process, which is called the proton-proton chain, is the backbone of nuclear fusion. But it doesn't end there.

The neutrino, being a weakly-interacting particle, will fly off into space, while the positron will interact with an electron, annihilating both of them and creating another gamma ray. In a later stage of the Sun's life-cycle, the helium atoms produced by the fusion reaction can themselves combine, in different reactions, to make heavier and heavier elements, releasing even more energy.

The radiative zone is just beyond the core of the Sun. It gets its name from its primary method of heat transfer: the radiation of light. As our photon leaves the core and enters the radiative zone, it encounters an obstacle: densely packed protons. They are so crammed together, photons can't travel more than a few millimeters without hitting another one. Each time one does, it loses some of its energy and is scattered in a random direction.

As a result, its forward progress is slowed to a crawl. It can take anywhere from a few thousand to a few million years for one photon to escape. It's not just the light from distant stars that takes millions of years to reach us; the light from our own Sun does too!

The convection zone is the final interior layer of the Sun; It ends at the Sun's surface. Here, heat transfer is dominated by convection: moving currents of plasma from bounce between the hot interior and cooler exterior. The Sun's plasma behaves much like a boiling pot of water, with hot bubbles forming deep inside the Sun rising to the surface—creating granules and supergranules.

The density of the solar plasma is much less than in the radiative zone. At the surface, the density is ten thousand times less than the density of air, so our photon wouldn't hit many atoms as it makes its way through. After bouncing around in the radiative zone, our photon has lost much of its energy, and has shifted into the visible spectrum. Millions of years after it was created in a fusion reaction, our photon finally breaks free from the Sun's interior.

Leaving the surface of the Sun, our photon then enters the Sun's atmosphere, which (like Earth) has multiple layers.  Our photon passes through the thin photosphere first, before entering the thicker chromosphere. Something interesting happens at this point: the temperatures start to increase as the photon makes its way through the corona (the outermost layer of the Sun's atmosphere). The corona—a white-hot plume of plasma that extends millions of kilometers away from the Sun—is hundreds of times hotter than the surface.

Although the corona is very sparsely populated with atoms, photons can still be scattered by dust or free electrons. However, they usually pass through mostly unimpeded, and head toward the direction of Earth. Many trillions of other photons join it, with trillions more travelling in other directions. Their combined energy can exert a force on any object large enough to get in the way.

This force is called radiation pressure, and it could be used in the future to power solar sails.

It takes approximately 8 minutes for our photon to travel the 93,000,000 miles (150 million kilometers) from the Sun to Earth. Once there, it dodges space debris and satellites and enters the atmosphere. If our photon were a gamma ray, an x-ray, or an ultraviolet ray, it would be absorbed or reflected by the upper atmosphere, and it would never reach the ground.

If it were a visible-light photon with a blue or violet wavelength, it would be scattered by the lower atmosphere, and reach the ground at more extreme angles. However, our photon has a red wavelength, and it passes straight through the atmosphere with minimal interaction.

Near the surface, our photon makes contact with the lens of an eye, where it is focused on a small spot on the retina. There, it is finally absorbed by a protein inside a cone cell, which sends an electrical signal to the brain and marks the end of the million year journey of a photon.

Read This Next
Satan's Butthole
The Sharpest-Ever Image of a Sunspot Looks Like a Portal to Hell
Brands We Love
Start Training For Your Electrical Engineer Career with These Classes
Tiny Flares
Scientists Found Something Surprising in Closest-Ever Photos of the Sun
Say Cheese
A Space Probe Just Took the Closest Pictures of the Sun Ever
IRL Icarus
Scientists Mystified: Sun's Magnetic Field Appears to be Flipping
More on Hard Science
Warped Tour
Thursday on futurism
Professor Believes Door to Warp Drive May Lie With Ethylene Glycol
Sky Bursts
Thursday on the byte
Astronomers Intrigued by 25 Mysterious Repeating Radio Signals From Deep Space
Tractor Beam
Jan 26 on the byte
Scientists Build Working Tractor Beam, Although It's Comically Tiny
READ MORE STORIES ABOUT / Hard Science
Keep up.
Subscribe to our daily newsletter to keep in touch with the subjects shaping our future.
+Social+Newsletter
TopicsAbout UsContact Us
Copyright ©, Camden Media Inc All Rights Reserved. See our User Agreement, Privacy Policy and Data Use Policy. The material on this site may not be reproduced, distributed, transmitted, cached or otherwise used, except with prior written permission of Futurism. Articles may contain affiliate links which enable us to share in the revenue of any purchases made.
Fonts by Typekit and Monotype.