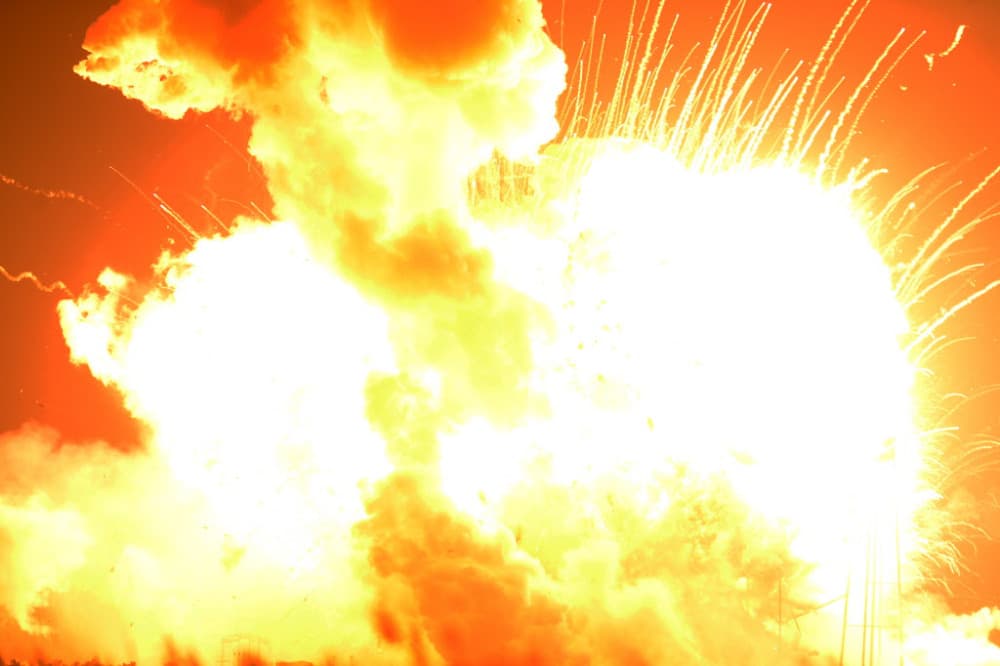 Unfortunately, earlier today (Oct. 28, 2014) an unmanned, 200-million-dollar Antares rocket exploded shortly after liftoff. The Antares was responsible for ferrying Orbital Science's 'Cygnus; spacecraft into orbit to carry 5,000 lbs. (2,300 kg) of supplies — including research experiments, crew supplies, and numerous mini satellites — to the International Space Station. While this loss is unfortunate, there were no critical supplies on-board and the astronauts on the ISS will be fine until the next launch can take place (however, classified equipment was also included in the payload, resulting in one area of the Wallops facility being temporarily closed).

NASA and Orbital Sciences held a press conference following tonight's incident to discuss what happened and the future of Orbital launches. Little is known at this point, but we know that the critical failure that took place did so in the first 20 seconds (when the Flight Termination System was initiated). We also know that there was disassembly of the first stage; however, neither NASA nor Orbital Sciences has access to all data yet.

And it looks like it will be quite some time before Orbital Sciences is able to make another trip to the ISS. The company only has one pad that is certified to launch Antares rockets. As a result, the launch pad will need to be fixed before Orbital Sciences can fly and fufil any of its other launch missions for NASA. Moreover, the Antares rocket will not fly again until we fully understand exactly what went wrong. Until then, in order to avoid speculation, researchers will lock-down all information, and they won't open it and begin the evaluation process until all data is gathered. Accumulating all the necessary data will take at least several weeks, so we will not know when Orbital Sciences will be able to restart its resupply missions for a month or more.

Fortunately, hazard areas are in place during every launch in order to prevent injuries, and these seemed to have been entirely successful. Bill Wrobel, director of NASA’s Wallops Flight Facility states, “We are very happy to report no injuries and all people on space and in ground were safe....however, there were lots of hazardous materials on board that people should not be looking for or trying to collect as souvenirs. If you find any, definitely do not touch them, and keep people away from it.”

Wrobel noted that there may be debris washing up on beaches over the course of the next few days (and even weeks). If you do find any, call local authorities or call the Wallops Incident Response Team at 757-824-1295.

When asked about concerns in relation to pollutants in the local water supply (or other concerns about environmental contamination) it was noted that the first stage of launch was based off of liquid oxygen and kerosene. While most of the kerosene probably burned off during the explosion, there was hazardous rocket fuel involved in the second and third stages. This material needs to be handled with care, especially since we don't know exactly how much of it is in the area.

Orbital Sciences emphasizes that they will figure out what went wrong and they absolutely will fly again: “We want to express our disappointment that we were not about to fulfill our obligation to space station…but we will be doing that in the future.”

NASA  also has a bright outlook regarding future enterprises.  “We want to understand what occurred and want them [Orbital Sciences] to get us back flying.”

William Gerstenmaier, NASA's Associate Administrator of NASA’s Human Exploration and Operations Directorate, said, “While NASA is disappointed that Orbital Sciences' third contracted resupply mission to the International Space Station was not successful today, we will continue to move forward toward the next attempt once we fully understand today's mishap. The crew of the International Space Station is in no danger of running out of food or other critical supplies."