The floating village is set to come to life in three years. 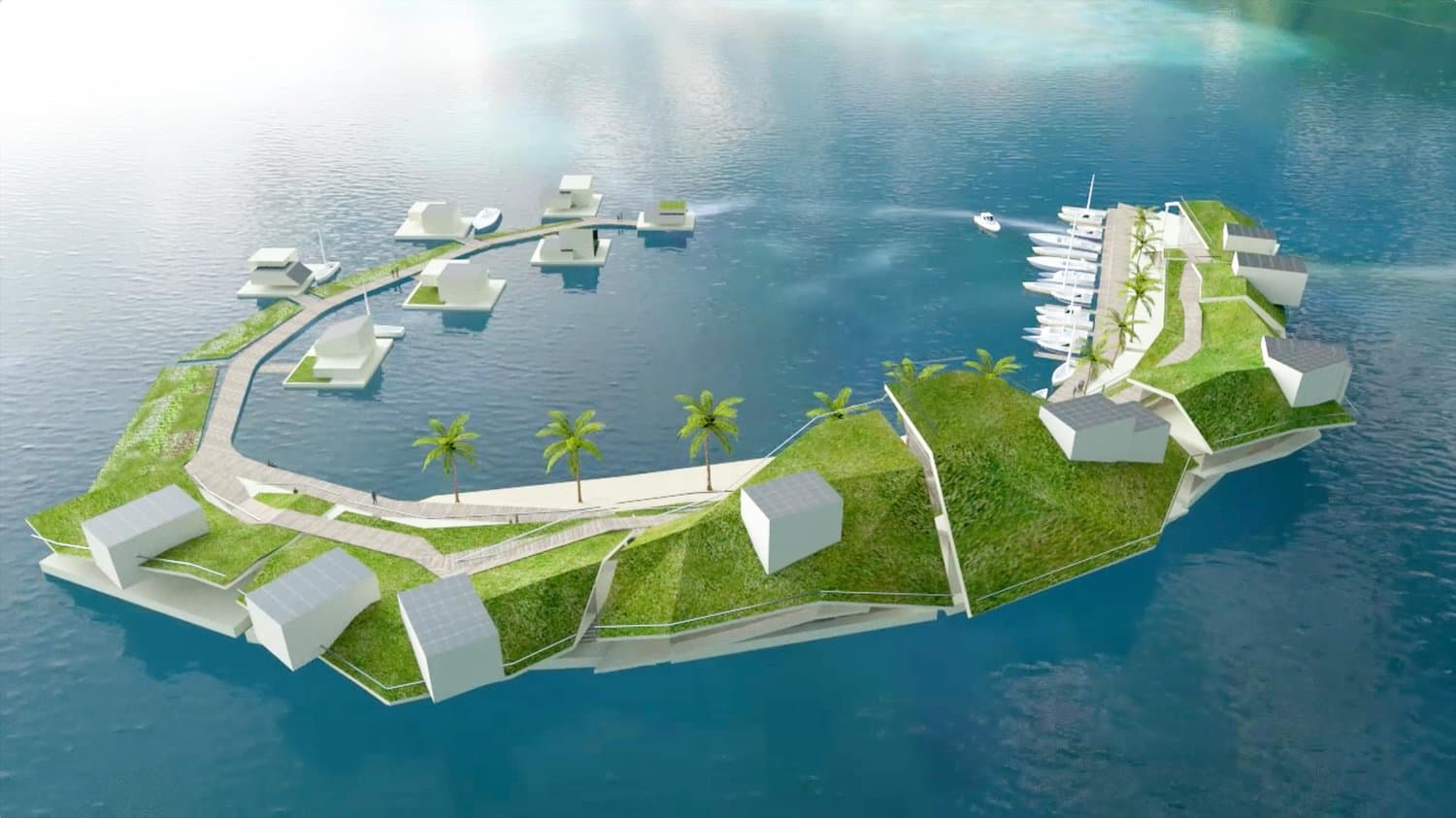 Cities at sea, afloat on the waves, have long been a cherished dream for forward-thinking architects and science fiction writers. Now the world’s first fully floating community is set to take shape in the turquoise waters of a Tahitian lagoon.

Blue Frontiers, a Singapore-based start-up, has signed a memorandum of understanding with the French Polynesian government to build a $60-million floating village on the south side of the main island of Tahiti, with a prospective starting date of 2020.

The village will serve as a showcase and test bed for technologies that will be needed to create much larger floating communities, says Joe Quirk, president of the Seasteading Institute, a San Francisco-based nonprofit that is the driving force behind Blue Frontiers. The institute hopes one day to establish full-scale floating cities that could flourish outside the territorial waters of existing nations.

Tahiti’s floating village will be just inside the island’s protective coral reef, in water about 100 feet deep some 1,000 yards from shore. Plans call for 200 to 300 people to live and work there on a dozen or so floating platforms, each about the size of a baseball diamond. The platforms will be connected by walkways into a combined area of 7,500 square feet.

Quirk says he expects the floating village to thrive through a combination of eco-tourism and new aquatic industries like seaweed farming and wave power.

A community afloat on the ocean, sometimes known as a “seastead,” has appealed to generations of thinkers and dreamers. Among the notable ideas is Triton City, designed in the 1960s by the American inventor Buckminster Fuller: a town of 5,000 people floating on Japan’s Tokyo Bay, as a seaborne extension for one the world most densely populated cities.

But while many ideas have been floated, the agreement between Blue Frontiers and French Polynesia may be the first time such a project has moved past the speculative stages. The company plans to raise the initial capital of $60 million in an “initial coin offering” of virtual currency, launching in February.

For the Seasteading Institute, which was founded in 2008 with funding from Silicon Valley investor Peter Thiel, the concept is linked to ideas of utopian floating communities that exist outside today’s international borders, territorial waters and legal jurisdictions.

Some sort of autonomy is also part of the plan for the first floating village: “The reason we’re able to call it a seastead is that it will be something of a semi-autonomous governmental start-up, under the protection of French Polynesia,” Quirk says. “So they’re allowing us to make this first step, to see if we can establish something spectacular.”

Project architect Bart Roeffen, who specializes in floating structures with the Dutch firm Blue21, says he wanted to create something for the Tahitian lagoon that didn’t look out of place.

From a distance, the floating village will look almost like a natural island, with a green “living roof” of gardens that will also help filter waste water. The buildings will be constructed with recycled materials where possible, making extensive use of local renewable materials, such as coconut wood.

Roeffen says the technologies needed for floating communities will become increasingly important, especially in islands and in coastal regions threatened by rising sea levels. But there is also a primal appeal to living on the water, reflected in the high value of coastal land.

“The fringes between the land and the water are where everything comes together,” Roeffen says, “so what we would like to do is to create more fringes.”

Read This Next
Death Spiral
The Human Family in Crisis
High Up
Only the Poorest People in North Korea Want to Live in the Tops of High-Rises
Brands We Love
This $20 Virtual Gardening Master Class Is the Secret to Finding Your Green Thumb
Brands We Love
Build a Garden Anywhere With the $20 Urban & Zen Gardening Mastery Bundle
Thanks For The Memories
The Decade in Dumbasses: The Idiots, Morons, and Rubes Who Made the 2010s Insufferable
More on Future Society
Musk Rats
4:54 PM on the byte
Twitter Is Quietly Re-Suspending the Lunatics Elon Musk Let Back On
Going Wireless
Yesterday on futurism
Hackers Took Over a Subdomain of Wired.com for Several Months and Replaced It With Sleazy Online Casino Content
Spreadsheet Guy
Tuesday on the byte
Sam Bankman-Fried Posts Excel Docs That He Says Shows Nothing Was His Fault
READ MORE STORIES ABOUT / Future Society
Keep up.
Subscribe to our daily newsletter to keep in touch with the subjects shaping our future.
+Social+Newsletter
TopicsAbout UsContact Us
Copyright ©, Camden Media Inc All Rights Reserved. See our User Agreement, Privacy Policy and Data Use Policy. The material on this site may not be reproduced, distributed, transmitted, cached or otherwise used, except with prior written permission of Futurism. Articles may contain affiliate links which enable us to share in the revenue of any purchases made.
Fonts by Typekit and Monotype.