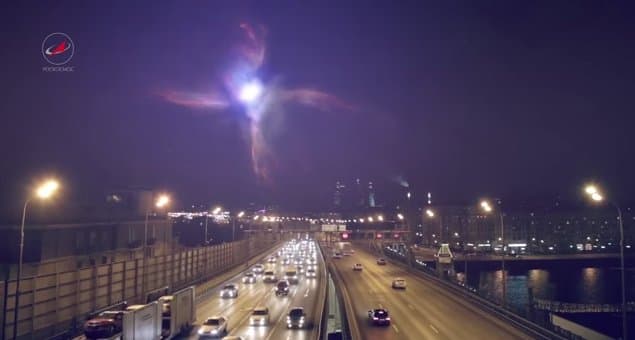 For 25 years now, the Hubble Space Telescope (and many other space-based satellites, to a lesser degree) has inspired us with countless jaw dropping images of space—ranging from the Great Nebula of Orion, to the Whirlpool Galaxy. They all look so large and detailed, you can almost imagine yourself floating through space, looking directly at them from up close—yet even the closest among them are incomprehensibly far away (the closest planet is typically 162 million miles/261 million kilometers from Earth, while the nearest star is over 4 light-years distant).

Some might say that these images tease us—they remind us that the universe is such a large place, our species could live hundreds of billions of years and we still wouldn't be able to scratch the surface of this particular infinity. Not a single thing can truly erase the disappointment that comes with this simple truth, but imagination can be a powerful (and humbling) thing.

In a new video, the Russian Space Agency (Roscosmos, to be precise) envisions how our sky may look if some of these wonders were in closer proximity to Earth.

Of course, it's fairly easy to calculate the size and brightness of each object, and use them to determine how their apparent properties would change if distance wasn't a problem. But those aren't the only factors at play. For example, light pollution is, and will always be, a serious problem in the modern world, so that would definitely affect the manner in which any object would look in our night sky. (Basically, I'm telling you to enjoy the video for what it is.. and realize that the renderings are just that—renderings)

WATCH: "Our Sky, If Some Celestial Bodies Were Closer to Us"