We caught a glimpse of this planet at just the right time. 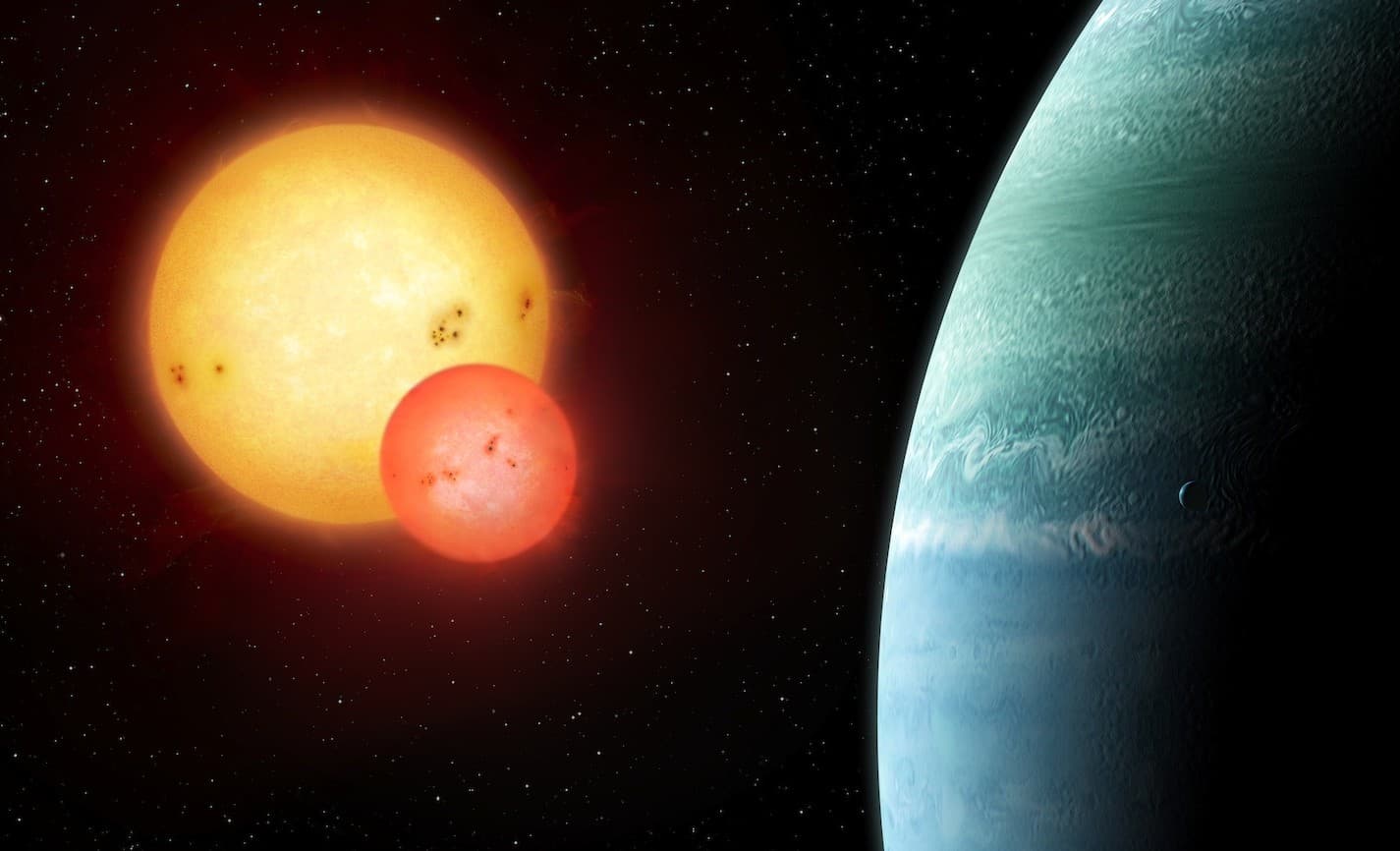 How to Find Exoplanets

Astronomers find new planets regularly. Most orbit just one star, but in special cases, planets have more than one Sun. In fact, using the Kepler Space Telescope, many planets of this nature were found to exist. Known as "circumbinary" planets, Kepler-453b—the tenth circumbinary system found overall, as well as the third found within the habitable zone—is the latest to join the ranks. The first two-Sun system was discovered in 2011.

Like its predecessors, Kepler-453b orbits a pair of alien Suns. But some may say that discovery was both unlikely and accidental, since the next window of opportunity wouldn't be until 2066.

"If we had observed this planet earlier or later than we did, we would have seen nothing and assumed there was no planet there," reported team member Stephen Kane (San Francisco State University). "That suggests that there are a lot more of these kinds of planets than we are thinking, and we're just looking at the wrong time."

As you can imagine, exoplanets are very challenging to find. They are, of course, very far away from us, don't produce any of their own light and the glare of their host stars can easily wash them out. Because they can't be identified directly, astronomers instead use the transit method, which looks for decreases in starlight. These "blips" in the field indicate that a planet has passed—or transited—between Earth and its host star.

Kepler-453b proved even more problematic. Not one, but two, stars tug at it, resulting in a more erratic orbit. These two-star planets behave more like spinning tops, and are rarely visible. According to the article published in The Astrophysical Journal, for every planet like this, there are about 12 others out there in a state such that they are undiscoverable by the transit method.

"It's amazing how fortunate we were in catching it at the right time," Kane said. "It's a good reminder that there's always a value in checking again." Indeed, this suggests there may be many more circumbinary planets out there, just waiting to be discovered. And astronomers are actively seeking them out.

Could Kepler-453b harbor life? Probably not, even though it does lie within the habitable zone—the area around a star where water (a main component of all life on Earth) could potentially exist in liquid form. However, it's much too big to be a rocky planet. By analyzing the amount of starlight blocked by the planet, the astronomers calculated that the planet is about 6 times larger than Earth and 60% larger than Neptune. Thus, the planet is likely a gas giant...not a rocky planet that could harbor life.

"But it could have moons that are rocky, which means you could have life on the moons in this system," Kane said.

Like the planet Tatooine in the movie "Star Wars," anyone on Kepler-453b, which orbits its host stars every 240 days (the stars, in turn, orbit each other in 27 days), would see two Suns in their sky. In this case, the larger star is only slightly smaller than our Sun. Its sidekick is even smaller—about 20% the size of our Sun—and considerably cooler.

"We didn't know circumbinary systems could exist until Kepler came along, and since then we've been finding them in larger numbers," exclaimed Kane, who has 100 discoveries under his belt.

"Being involved in these discoveries never gets old," he continues. "We live in an amazing time in which we have the technology to measure objects hundreds of light-years away and answer some of the questions about the universe that humans have asked for ages. It's incredible to be a part of that."

Read This Next
Satan's Butthole
The Sharpest-Ever Image of a Sunspot Looks Like a Portal to Hell
Tiny Flares
Scientists Found Something Surprising in Closest-Ever Photos of the Sun
Say Cheese
A Space Probe Just Took the Closest Pictures of the Sun Ever
IRL Icarus
Scientists Mystified: Sun's Magnetic Field Appears to be Flipping
Lonely Planetesimal
Astronomers Discover Fragment of Planet Orbiting Its Dead Star
More on Hard Science
Tractor Beam
Jan 26 on the byte
Scientists Build Working Tractor Beam, Although It's Comically Tiny
Having a Blast
Jan 18 on the byte
New Study Shows Where You Should Hide to Survive a Nuclear Attack
Offworld Amino
Jan 15 on the byte
Scientists Find Building Blocks of Life in Meteor That Smashed Into Family's Driveway
READ MORE STORIES ABOUT / Hard Science
Keep up.
Subscribe to our daily newsletter to keep in touch with the subjects shaping our future.
+Social+Newsletter
TopicsAbout UsContact Us
Copyright ©, Camden Media Inc All Rights Reserved. See our User Agreement, Privacy Policy and Data Use Policy. The material on this site may not be reproduced, distributed, transmitted, cached or otherwise used, except with prior written permission of Futurism. Articles may contain affiliate links which enable us to share in the revenue of any purchases made.
Fonts by Typekit and Monotype.