New Particles May "Signal the Breaking Point of the Standard Model"

We may be on the verge of a revolution in physics. 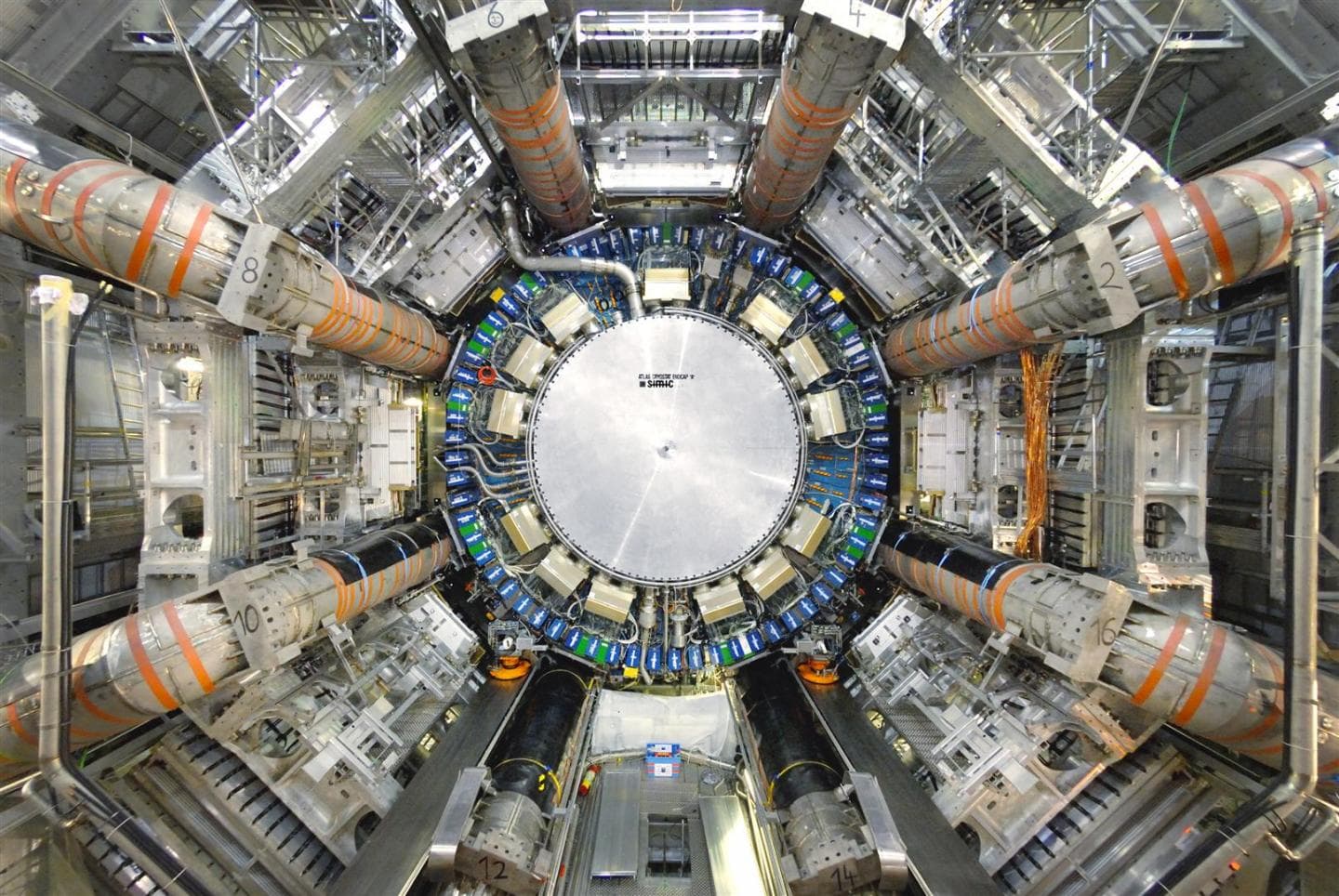 Operated by the European Organization for Nuclear Research (CERN), the Large Hadron Collider (LHC) is the largest particle accelerator today, built underground in an area that straddles France and Switzerland. It's purpose is to analyze the simplest particles in existence in an attempt to understand how the universe works.

One of the experiments currently being conducted at the LHC is called the LHCb, which is exploring what happened after the Big Bang that allowed matter "to survive and build the Universe we inhabit today." While the LHCb experiment got off to a good start, according to two University of Cambridge theoretical physicists working at CERN, there's something anomalous going on.

"Using proton collisions from the LHC, LHCb has been carefully measuring the production of bottom mesons and how often they decay to kaon and muon particles," Ben Allanach and Trevong You wrote in an article for The Guardian. "It looks like the answer is: not nearly often enough! In fact, this decay occurs at only about three-quarters of the frequency predicted by the Standard Model."

Particle decay is a process by which an unstable subatomic particle multiples into several other particles. Not all particles decay, but those that can do so at a rate that subscribes to the Standard Model. Data from the LHCb suggests that so-called bottom mesons don't decay at that expected frequency. Allanach and You explained that such irregularity could be due to statistical fluctuations, although it's extremely unlikely in this case.

"If this isn’t just bad luck, it could be an opportunity. Deep within the bottom mesons, quantum excitations of new particles could be at work, making the bottom mesons decay with the wrong frequency," the pair wrote. These new particles, they believe, could either be "leptoquarks"— a hybrid between leptons and quarks — or what's known as "Z primes."

Further study and additional data is needed to confirm these new particles — if they truly exist. Data from the LHCb experiment might shed some light on the anomalies once analysis is finished, about a year from now. To confirm the findings, Allanach and You pointed out, we need new high energy colliders.

If confirmed, these new particles could signal the breaking point of the Standard Model, which other physicists have long considered to be inadequate to explain the physics of the universe. While the LHC and efforts similar to it have greatly contributed to our understanding of matter, as the pair wrote, higher energy colliders are needed to find out "what lurks beyond the Standard Model."

Read This Next
Particle
Scientists Just Found Evidence for Fifth Force of Nature
Atom Smash!
Vast New Particle Accelerator Would Dwarf Large Hadron Collider
Nap Time
The Large Hadron Collider Just Shut Down
Futurism
CERN Researchers Are Planning to Trap and Truck Antimatter From One Facility to Another
Futurism
"Holy Grail" Particle: New Physics Research Shows Tetraquarks Must Exist
More on Hard Science
Tractor Beam
Jan 26 on the byte
Scientists Build Working Tractor Beam, Although It's Comically Tiny
Having a Blast
Jan 18 on the byte
New Study Shows Where You Should Hide to Survive a Nuclear Attack
Offworld Amino
Jan 15 on the byte
Scientists Find Building Blocks of Life in Meteor That Smashed Into Family's Driveway
READ MORE STORIES ABOUT / Hard Science
Keep up.
Subscribe to our daily newsletter to keep in touch with the subjects shaping our future.
+Social+Newsletter
TopicsAbout UsContact Us
Copyright ©, Camden Media Inc All Rights Reserved. See our User Agreement, Privacy Policy and Data Use Policy. The material on this site may not be reproduced, distributed, transmitted, cached or otherwise used, except with prior written permission of Futurism. Articles may contain affiliate links which enable us to share in the revenue of any purchases made.
Fonts by Typekit and Monotype.