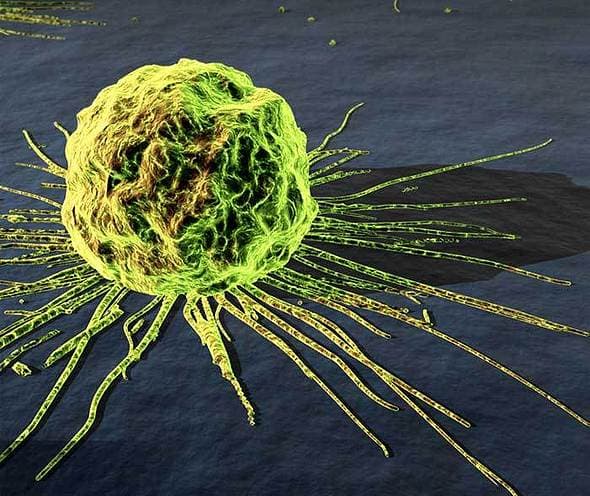 A team of Stanford researchers has developed a protein therapy that disrupts the process that causes cancer cells to break away from original tumor sites, travel through the blood stream and start aggressive new growths elsewhere in the body. This process, known as metastasis, can cause cancer to spread with deadly effect.

"The majority of patients who succumb to cancer fall prey to metastatic forms of the disease," said Jennifer Cochran, an associate professor of bioengineering who describes a new therapeutic approach in Nature Chemical Biology. Today doctors try to slow or stop metastasis with chemotherapy, but these treatments are unfortunately not very effective and have severe side effects.

The Stanford team seeks to stop metastasis, without side effects, by preventing two proteins – Axl and Gas6 – from interacting to initiate the spread of cancer. Axl proteins stand like bristles on the surface of cancer cells, poised to receive biochemical signals from Gas6 proteins.
When two Gas6 proteins link with two Axls, the signals that are generated enable cancer cells to leave the original tumor site, migrate to other parts of the body and form new cancer nodules.

To stop this process Cochran used protein engineering to create a harmless version of Axl that acts like a decoy. This decoy Axl latches on to Gas6 proteins in the blood stream and prevents them from linking with and activating the Axls present on cancer cells. In collaboration with Professor Amato Giaccia, who heads the Radiation Biology Program in Stanford's Cancer Center, the researchers gave intravenous treatments of this bioengineered decoy protein to mice with aggressive breast and ovarian cancers. Mice in the breast cancer treatment group had 78 percent fewer metastatic nodules than untreated mice. Mice with ovarian cancer had a 90 percent reduction in metastatic nodules when treated with the engineered decoy protein.

"This is a very promising therapy that appears to be effective and non-toxic in pre-clinical experiments," Giaccia said. "It could open up a new approach to cancer treatment." Giaccia and Cochran are scientific advisors to Ruga Corp., a biotech startup in Palo Alto that has licensed this technology from Stanford. Further preclinical and animal tests must be done before determining whether this therapy is safe and effective in humans.

Greg Lemke, of the Molecular Neurobiology Laboratory at the Salk Institute, called this "a prime example of what bioengineering can do" to open up new therapeutic approaches to treat metastatic cancer. "One of the remarkable things about this work is the binding affinity of the decoy protein," said Lemke, a noted authority on Axl and Gas6 who was not part of the Stanford experiments. "The decoy attaches to Gas6 up to a hundredfold more effectively than the natural Axl," Lemke said. "It really sops up Gas6 and takes it out of action."

The Stanford approach is grounded on the fact that all biological processes are driven by the interaction of proteins, the molecules that fit together in lock-and-key fashion to perform all the tasks required for living things to function. In nature proteins evolve over millions of years. But bioengineers have developed ways to accelerate the process of improving these tiny parts using technology called directed evolution. This particular application was the subject of the doctoral thesis of Mihalis Kariolis, a bioengineering graduate student in Cochran's lab.

Using genetic manipulation, the Stanford team created millions of slightly different DNA sequences. Each DNA sequence coded for a different variant of Axl. The researchers then used high-throughput screening to evaluate over 10 million Axl variants. Their goal was to find the variant that bound most tightly to Gas6. Kariolis made other tweaks to enable the bioengineered decoy to remain in the bloodstream longer and also to tighten its grip on Gas6, rendering the decoy interaction virtually irreversible.

Yu Rebecca Miao, a postdoctoral scholar in Giaccia's lab, designed the testing in animals and worked with Kariolis to administer the decoy Axl to the lab mice. They also did comparison tests to show that sopping up Gas6 resulted in far fewer secondary cancer nodules.

Irimpan Mathews, a protein crystallography expert at the SLAC National Accelerator Laboratory, joined the research effort to help the team better understand the binding mechanism between the Axl decoy and Gas6. Protein crystallography captures the interaction of two proteins in a solid form, allowing researchers to take X-ray-like images of how the atoms in each protein bind together. These images showed molecular changes that allowed the bioengineered Axl decoy to bind Gas6 far more tightly than the natural Axl protein.

Years of work lie ahead to determine whether this protein therapy can be approved to treat cancer in humans. Bioprocess engineers must first scale up production of the Axl decoy to generate pure material for clinical tests. Clinical researchers must then perform additional animal tests in order to win approval for and to conduct human trials. These are expensive and time-consuming steps.

But these early, hopeful results suggest that the Stanford approach could become a non-toxic way to fight metastatic cancer. Glenn Dranoff, a professor of medicine at Harvard Medical School and a leading researcher at the Dana-Farber Cancer Institute, reviewed an advance copy of the Stanford paper but was otherwise unconnected with the research. "It is a beautiful piece of biochemistry and has some nuances that make it particularly exciting," Dranoff said, noting that tumors often have more than one way to ensure their survival and propagation.

Axl has two protein cousins, Mer and Tyro3, that can also promote metastasis. Mer and Tyro3 are also activated by Gas6. "So one therapeutic decoy might potentially affect all three related proteins that are critical in cancer development and progression," Dranoff said.