Watch: The War Inside Your Body 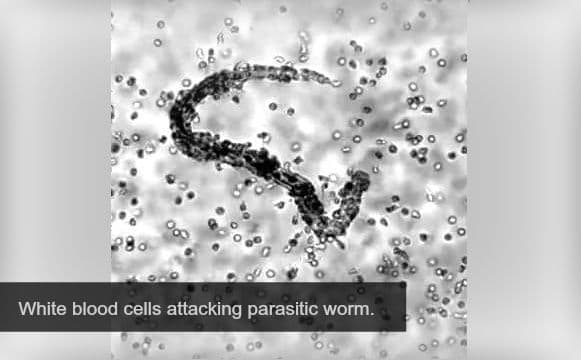 Want to see white blood cells attacking a parasitic worm like ants defending their colony? Or witness bacteria being hunted down inside your veins? In this video, produced in a collaboration with Hashem Al-Ghaili, we get a glimpse of the epic struggle that continually rages just beneath our skin.

Ultimately, this video highlights several important facts. First, it shows that, in a number of ways, we are more microbial than human. In other words, it showcases the ways in which you are a lot more than just you.

Yet, despite the fact that they make up a large part of us (indeed, some 90 percent of the cells in our bodies are not human cells), we are only just beginning to understand the roles that they play. A report from Harvard, CalTech, and the National Institutes of Health details some of what we know about the microorganisms living inside of us (unfortunately, it seems that much remains a mystery).

Read the rest of the report here.

In the end, it is also important to note the significant role that science plays in all for this. For, without some of the amazing advancements made by researchers and engineers around the globe, much of this information would remain lost to us. It is technology that allows us to see the wonderful world beneath our skin, and it is only through methodological research (testing and testing and retesting) that we begin to see how everything fits together.

The video also displays neurons firing their electrical impulses, beating heart cells, and much more. So take a moment to get a glimpse of the mighty power of the body—take a moment to better understand yourself—in the footage below.