His wife allegedly sold them for $220 per card. 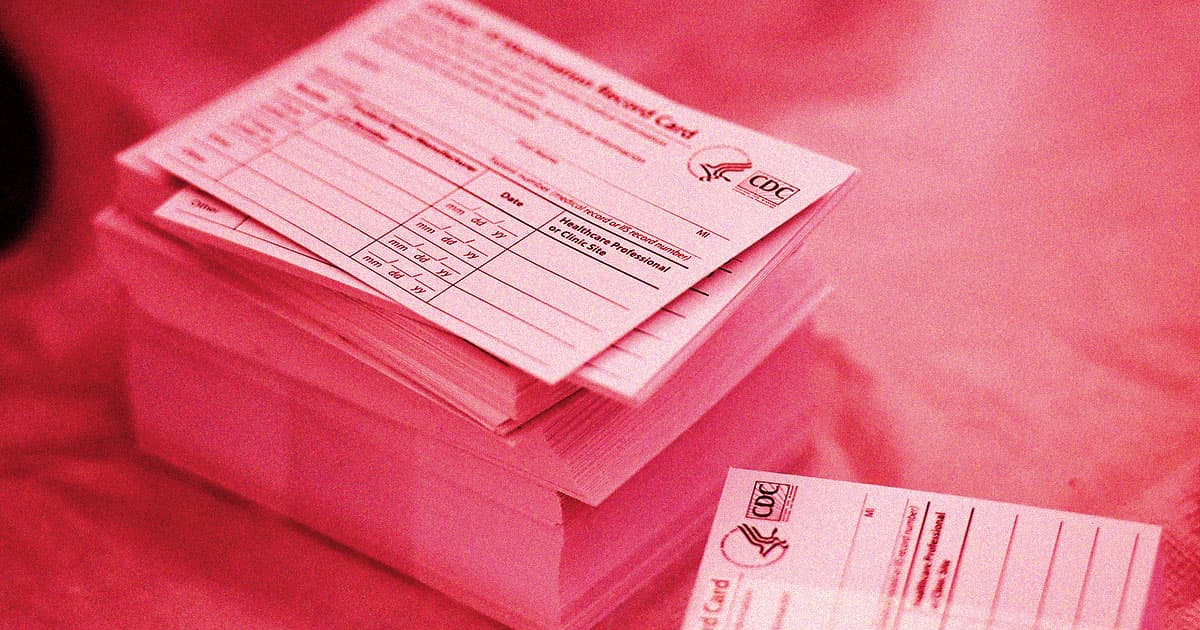 An NYPD cop is currently under investigation for allegedly taking part in a fake vaccine card scheme that netted him and his spouse well over a million dollars.

Officer Derin DeVuono and his wife Julie DeVuono, a pediatric nurse, are accused of selling fake COVID-19 vaccine cards, according to a press release from the Suffolk County District Attorney.

Julie is accused of using her Long Island-based pediatric practice to procure blank vaccine cards. She and Marissa Urraro, a fellow nurse and alleged accomplice in the scheme, reportedly sold the cards to buyers before entering the customers into the state’s immunization database.

The pair allegedly sold the cards for $220 a pop for adults and $85 for children, in an extraordinary bulk that netted them roughly $1.5 million. Julie also allegedly stole vaccine doses and syringes to administer to customers.

"These individuals allegedly used their positions as licensed healthcare professionals to engage in criminal conduct for their financial benefit," District Attorney Raymond Tierney said in the release. He later added, "I hope this sends a message to others who are considering gaming the system that they will get caught and that we will enforce the law to the fullest extent."

Meanwhile, Derin is currently under investigation by the NYPD Internal Affairs Bureau for any involvement in his wife’s illicit business and whether or not he sent business her way, an anonymous source told The New York Daily News.

This isn't his first time in hot water, either. In 2020, he was reprimanded and lost five vacation days due to misconduct involving an NYPD Cessna plane. Hilariously, he was accused of flying the plane in a penis-shaped path and misusing the craft during a flight in 2017.

Police discovered $900,000 in cash as well as a detailed ledger of the scheme in a search of the couple’s home last Thursday. The ledger included details of how they had apparently earned more than $1.5 million since November.

Julie and Urrero were charged with forgery, according to the DA’s office. Julie was also charged with offering a false instrument for filing for entering her customers into the vaccine database.

Since the wide roll out of vaccines in 2021, a veritable cottage industry of fake vaccine cards has sprouted out of the woodwork. While it’s astonishing to think that someone would pay hundreds of dollars for something they could get for free, we shouldn’t be too surprised considering the great lengths anti-vax idiots will go to in order to avoid getting the vaccine.

12.02.22 Studies
Scientists Hopeful About Promising Results From HIV Vaccine
10.24.22 Developments
Pfizer's Jacking Up the COVID Vaccine Cost to 10,000 Percent Its Production Cost
9.21.22 Developments
FDA Warns Americans to Stop Cooking Chicken in NyQuil
9.20.22 Developments
Biden Really Screwed Up When He Said the "Pandemic Is Over"
9.08.22 Developments
Nobody Is Sure What Queen Elizabeth II Died From