The researchers were able to use CRISPR-Gold to induce HDR in human embryonic stem cells and muscle cells from a mouse in vitro.
by Brad Jones / October 03 2017

CRISPR has the potential to revolutionize genetic engineering, but up until now, delivery methods have been something of a limiting factor. However, a new study has successfully used gold nanoparticles to carry out a nonviral application.

Scientists coated a gold nanoparticle with DNA that had been edited so that it would latch onto it. Donor DNA used to carry out a process known as homology-directed repair (HDR) was bound to the particle, and finally, the Cas9 protein and guide RNA was added. 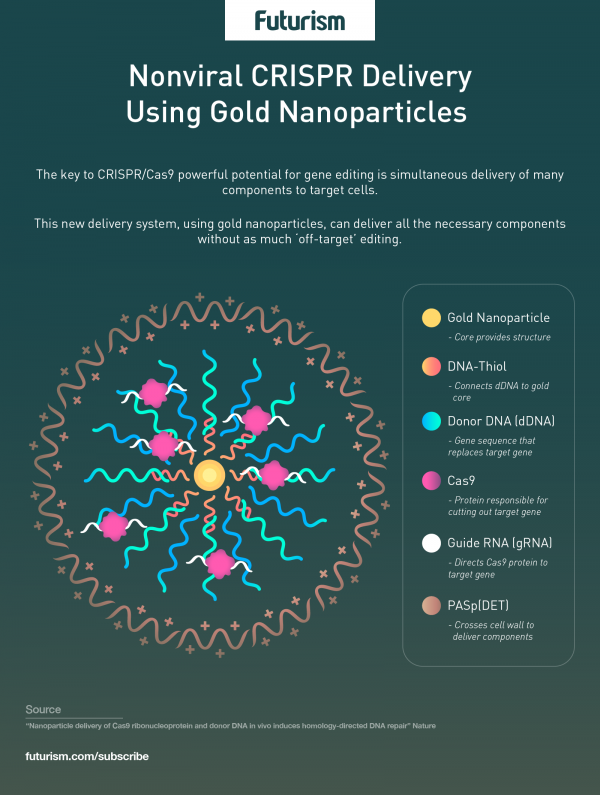 The assembly, dubbed CRISPR-Gold, was then coated in a polymer that’s capable of triggering endocytosis, which helps the Cas9 protein, guide RNA, and template DNA abscond from the endosomes inside cells.

“You have to provide the cell [with] the Cas9 enzyme, guide RNA by which you target Cas9 to a particular part of the genome, and a big chunk of DNA, which will be used as a template to edit the mutant sequence to wild-type,” co-author Irina Conboy told The Scientist, explaining the HDR process. “They all have to be present at the same time and at the same place, so in our system you have a nanoparticle which simultaneously delivers all of those three key components in their active state.”

The researchers were able to use CRISPR-Gold to induce HDR in human embryonic stem cells and muscle cells from a mouse in vitro. They also performed a successful test in vivo by injecting the assembly into a mouse model for Duchenne muscular dystrophy, which was not able to produce the protein dystrophin. Post injection, the researchers observed an improvement to muscle function.

One the biggest concerns for researchers regarding current methods of administering CRISPR is that they run the risk of unwanted off-target effects. However, a more targeted, nonviral approach, like the one Conboy’s team has developed, avoids those potential pitfalls.

However, while this is a promising step in the right direction, there is still plenty of work left to be done. A localized injection is well-suited to the treatment of a condition like Duchenne muscular dystrophy, but other applications would require systemic delivery — which isn’t currently possible with CRISPR-Gold.

Conboy and fellow co-author Niren Murthy will continue to investigate new methods of delivery in hopes of making CRISPR editing more accurate for both Duchenne muscular dystrophy and other conditions. Meanwhile, their collaborators Kunwoo Lee and Hyo Min Park have established a company called Genedit, which plans to look into the potential commercial applications of CRISPR-Gold.