There's always another technicality, no matter how much evidence researchers find. 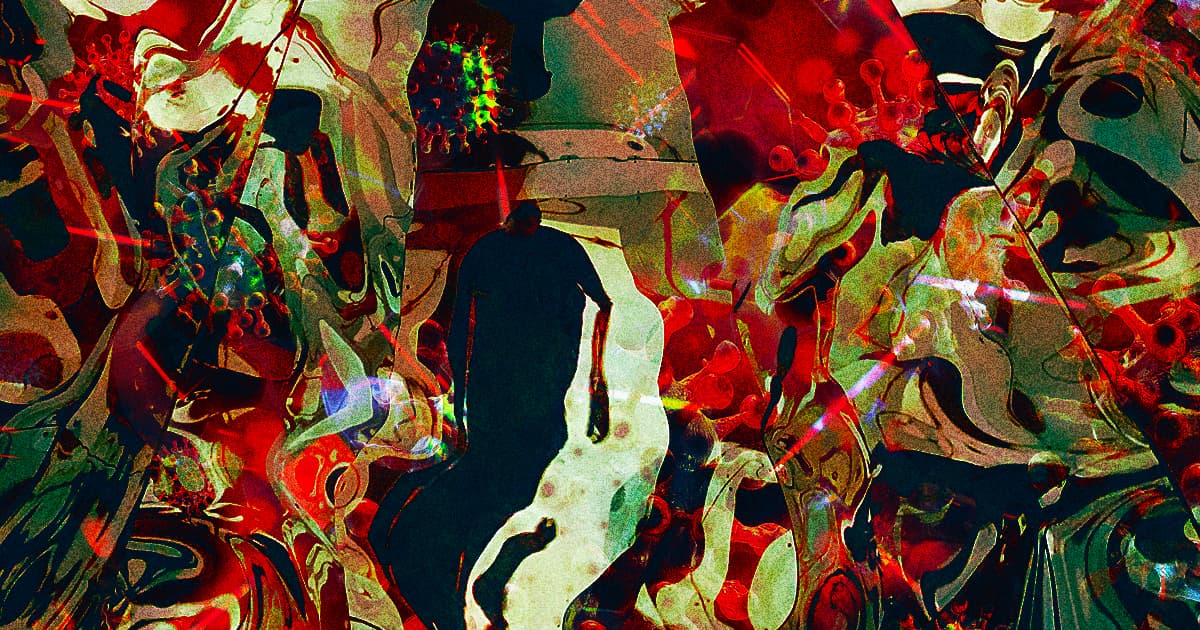 Amid all of the calls for investigations and probes into how the coronavirus began remains a crucial, thorny question: What, exactly, would it take to decisively prove that SARS-CoV-2, the coronavirus that causes COVID-19, first jumped from an animal to a human — or, as a growing number of experts and elected officials suggest as a possibility, that it somehow escaped from a research lab at the Wuhan Institute of Virology (WIV)?

The answer is, well, a lot. Or nothing. On a closer inspection, the question starts to dissolve into a tragic hall of mirrors that will probably never have a satisfying answer.

The initial and most widely accepted hypothesis — that an animal virus made the jump to humans — is both better supported and more likely, according to a general consensus among experts. But without enough concrete evidence in either direction, ideas like the lab leak hypothesis continue to persist in the public consciousness, whether it's from US President Joe Biden calling for spies to investigate in China or a growing number of prominent figures saying, either grudgingly or gleefully, that they can't rule it out.

The core challenge is that there is no single "lab leak hypothesis" to either prove or debunk, University of California, San Diego molecular epidemiologist Joel Wertheim told Futurism. Instead, it's an open-ended possibility wrapped up in endless conjecture by various parties who may have conflicting interests, political stances, and other pre-established biases.

Epidemiologists like Wertheim — who's made a career of tracking down how viruses like HIV emerge and spread during outbreaks — and other experts have been tasked with unraveling an endless list of possible timelines that range from unhinged conspiracy theories to plausible-yet-unlikely lab accidents.

"I guess a philosophical problem with the lab leak hypothesis is that it is unfalsifiable," Wertheim said. "And what I mean by that is the specific scenario where a virus was isolated from an animal brought into the lab and then infected a technician or was accidentally released by somebody working there — there is no virus that we can find in nature that can disprove that scenario."

But of course, public figures have floated a great range of other theories. Former president Donald Trump and officials in his administration made baseless accusations, with zero evidence, that the coronavirus was a bioweapon deliberately released on the world. Others might tell you that the lab in Wuhan was researching gain-of-function mutations: taking an existing virus and altering it to become more dangerous.

Any of those scenarios could conceivably be true, though the more conspiratorial ones seem vanishingly unlikely. After all, what would China's motivation be to unleash a deadly virus on its own population?

The conversation has often been so politically charged that credible experts avoided it altogether, Undark reported earlier this year. That's despite the fact that many prominent scientists do believe it's worth exploring, or at the very least that it shouldn't be dismissed outright.

The most realistic scenario for a lab leak, based on the limited evidence that we have, is that an accident or oversight resulted in someone who works at the facility accidentally getting sick, going home, and unknowingly spreading the disease.

This particular brand of the lab leak hypothesis surged back to life last month when The Wall Street Journal reported that three WIV researchers were hospitalized with an unknown illness in November 2019, right around when the coronavirus began to circulate. It's possible that they had caught — and therefore began to spread — COVID. But it's also possible that they had something else.

Either way, confirming their illness through further investigation won't necessarily reveal how they caught it in the first place.

For example, it's possible that they were infected during a field study rather than a lab experiment. In fact, many of the more realistic lab leak scenarios strongly resemble the more likely origin story — a virus circulating in animals made the leap to a human host — and simply involve the lab as a middleman.

"If it got into the lab, then it's a lab leak," Wertheim said. "So I think the [lab leak hypothesis] allows for something like 'They found a bat, brought in the virus, isolated that virus, and got infected with it.'"

Even within that framework, there are countless permutations that all but set investigators seeking a definitive answer up for failure. For instance, a leak could have occurred regardless of whether scientists had simply gathered the coronavirus from the field or whether they'd tinkered with its genetic code.

And reports out of the lab haven't exactly cleared it up. In March 2020, prominent WIV virologist Shi Zhengli told Scientific American that she initially feared that she or her team were somehow responsible. But just this month, she spoke to The New York Times and called any lab leak allegations baseless, mirroring an interview she gave to Science Magazine in July 2020.

"How on earth can I offer up evidence for something where there is no evidence?" she asked the NYT.

That whiplash could represent a genuine change of mind, but of course it could also be a result of the totalitarian Chinese government threatening Zhengli's career or family. That's the unfortunate crux of the lab leak theory — depending on their worldview and biases, different people can look at the same information and context and come to wildly different conclusions.

Maybe that's why discourse about the theory has ping-ponged back and forth between being presented as an untouchable, xenophobic conspiracy theory — as a group of 27 prominent scientists opined in The Lancet in February 2020 — to a reasonable hypothesis worthy of investigation, which 18 other scientists argued in the journal Science this May.

But throughout the conversation, the stores of actual, tangible proof for either camp largely remained stagnant.

"Unless we find a virus circulating in bats or some other animal today that is identical to one that we saw in humans or the immediate precursor to one that we saw in humans, there is always room for a hypothetical intermediate virus to have been brought into the lab and released," Wertheim said. "You will never be able to narrow that window down enough. So even if nothing comes out of these investigations, these hypothetical investigations into the lab, there will never be a wild virus that can reject the lab leak hypothesis. And from a philosophy of science perspective, that's problematic."

That said, there are some forms of evidence that could lend support to one possible origin story over the other, even we're unlikely to ever actually find them.

Richard Ebright, a molecular biologist at Rutgers University, had some ideas for what sorts of dispositive evidence an investigator might find.

For instance, he said, evidence that WIV did in fact have samples of SARS-CoV-2, or at least samples of a virus more similar to SARS-CoV-2 than anything identified to date, would be a glaring red flag that some sort of coverup had occurred.

Any concrete indication that the lab was performing bioengineering experiments designed to make coronaviruses more deadly would also be eyebrow-raising, he added, along with any evidence that WIV staffers were infected with SARS-CoV-2 prior to the outbreak.

"Or a credible confession," he added.

But of course, even if a lab worker confessed, Chinese authorities could claim the admission was politically motivated. Like Wertheim said, it's very difficult to prove anything for sure — and, for what it's worth, he believes the virus probably emerged from nature.

Even though most experts agree that a zoonotic transmission is far more likely, figuring out exactly how that leap happened is nearly impossible, and so the lab leak hypothesis lives on.

What do all these people making all these heated calls for more investigations into the WIV actually want? Yes, learning how the pandemic began can, assuming appropriate measures are taken, could help mitigate or prevent the next one.

But there's nothing stopping us from taking those measures anyway. Stepping back for a minute, it sounds absurd to demand better laboratory safety measures, better accountability, and more transparent communications across national borders if and only if we determine that SARS-CoV-2 was accidentally released by a scientist.

Besides, what's the end goal here? Blood? War? Being able to say "I told you so?" More anti-AAPI hate crimes?

"I mean, look, if somebody tomorrow comes out of the Wuhan Institute of Virology and says. 'Oh, actually, here's this virus we're working on and it's identical to the ancestor or nearly identical to the ancestor of SARS-CoV-2,' well then that would be very strong evidence in support of that," Wertheim said. "To get sort of inculpatory evidence, so to speak, that could exist. But exculpatory evidence out of the lab or even in nature, it's just not possible. So in that sense, it's not a question of 'Is the lab leak scenario possible?' Yes, it is possible. We know viruses come out of labs. It's a question of what is more likely and where should we be investing resources, especially because this isn't going to be the last coronavirus pandemic."

Establishing, funding, and actually maintaining global disease surveillance networks will do a lot more good than pointing fingers just to be able to do so, as will measures like waiving intellectual rights to vaccines so they can be distributed more rapidly and equitably. And the best news is we can start doing that today — all it would take is national and global leaders who actually want to.

More on the lab leak hypothesis: Fauci Says It's Unlikely But Possible That COVID Virus Leaked From Lab