In the Future, Cells Reprogrammed Inside Our Bodies Will Fight Cancer for Us

Just 24 hours after reprogramming, these cells were on the attack.
by Christianna Reedy / April 19 2017

The Emperor of All Maladies

Cancer is when an aberrant mutation in a cell leads it to prolifically divide, causing abnormal cell growth that can potentially spread to other parts of the body if untreated. Cancer is the second leading cause of death globally, with one in every six deaths caused by a type of cancer in 2015, leading to 8.8 million deaths.

Because different mutations can cause cancer, and cancerous cells can develop in many different parts of the body, doctors are continually coming up with different strategies for treating the disease. With each passing year, research on the topic continues to progress. From personalized vaccines to mecha-suit sperm, we’ve been looking in every possible nook and cranny in hopes of finding an effective therapy that can work better than what we have today.

Currently, we use a host of methods to treat cancer, including surgery, radiation therapy, chemotherapy, immunotherapy, targeted therapy, hormone therapy, stem cell transplant, and precision medicine. While some cancer patients receive only one treatment, these treatments are normally used in conjunction to increase the rate of success.

Since the 1960s, our efforts in tackling cancer have progressed significantly. Patients back in the day had a five-year survival rate of around 50 percent. With the advent of these new therapies, some the most commonly diagnosed cancers in the U.S. have 5-year-survival rates at around 75 percent.

Many are hopeful that these numbers will soon improve again, with studies concluding that, of all new cancer therapies that make it into randomized controlled trials, at least 25 to 50 percent will improve current therapies. In fact, this might be the case for a new potential cancer treatment that uses nanoparticles.

Nanoparticles to The Rescue

The next step in cancer therapies might be quietly waiting for its time in the limelight in Seattle, Washington, at the Fred Hutchinson Cancer Research Center, where scientists have constructed biodegradable nanoparticles that can genetically program immune cells while inside the body to target cancer cells. The study was published on April 17 in Nature Nanotechnology and focused on the effect that nanoparticle-programmed immune T cells had on leukemia in mouse models.

The nanoparticles carried genes that code for chimeric antigen receptors (CARs), which are proteins designed by scientists to help immune cells target and destroy cancer. Once the immune cells undergo this molecular modification, they turn into an army of cancer serial killers. 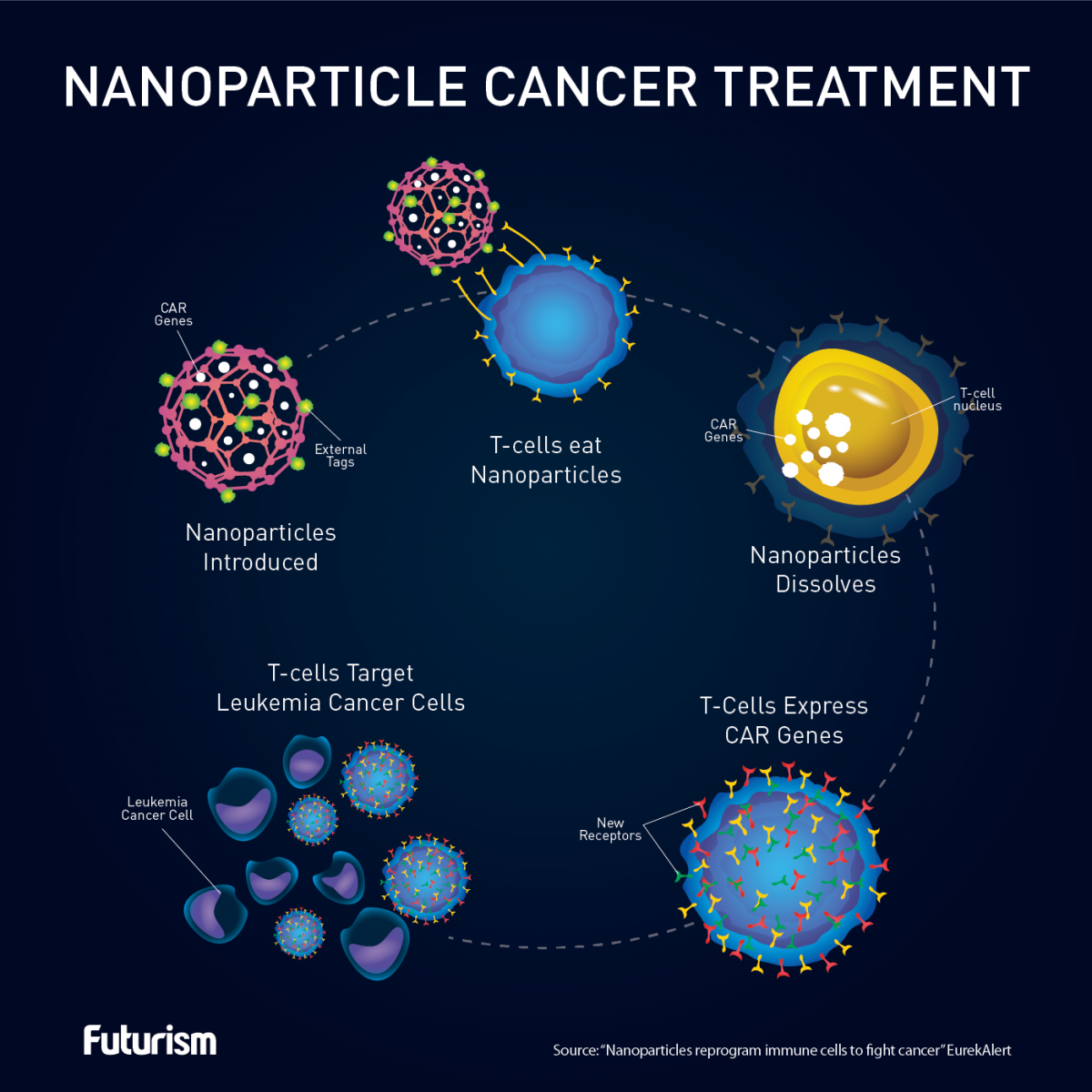 This new method can eliminate expensive and time-consuming steps that lag previous T cell cancer therapies. The current protocol is that the T cells are removed from the patient, genetically altered, regrown, and infused back into the patient. The biodegradable nanoparticles will eliminate the removal, regrowth, and infusion steps by accomplishing the reprogramming step over a time span of 24 to 48 hours while the T cells are in the body.

When the researchers compared the nanoparticle-based method to current immunotherapy methods that require the T cells to be removed, researchers noticed that leukemia-induced mice lived an additional 58 days on average when compared to the mice that received the current treatment.

While these results are exciting, the researchers are looking to make the process safer before they move into human trials. But if this new technique is approved for humans, it could have many more applications. Scientists are looking to adapt the method for diseases like hepatitis, HIV, or even solid tumors.

By quickly arming patients’ immune cells to fed off disease, this new treatment could lower healthcare costs and improve the quality of patients’ lives.