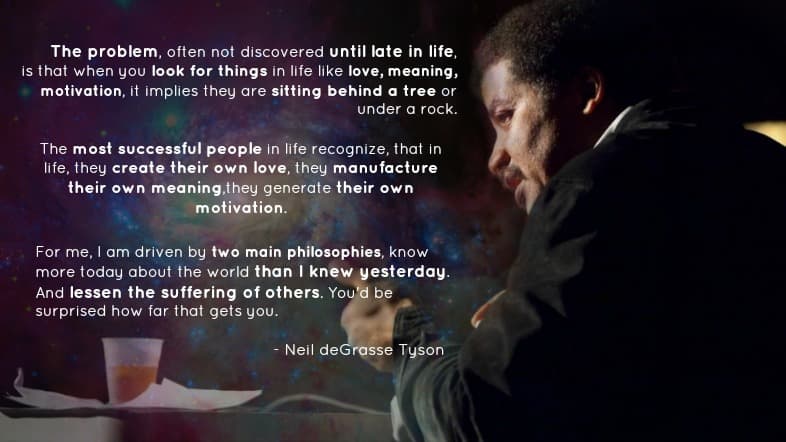 “For me, I am driven by two main philosophies: know more today about the world than I knew yesterday and lessen the suffering of others. You'd be surprised how far that gets you.”

If you don't know who Neil deGrasse Tyson is, I would have to guess you have been living under a rock for the past ten years or so. For those of you that do know of him, how much do you really know about the man who is sometimes referred to as the Carl Sagan of the 21st century?

After seeing the stars during a visit to Pennsylvania, Tyson became entranced with astronomy at the tender age of nine, he continued to study astronomy throughout his teens. He even earned a foothold and slight fame in the astronomy community by giving lectures on the subject at the young age of fifteen.  Unfortunately for Carl Sagan, who wished to recruit Tyson to study at Cornell University, Tyson decided instead to attend Harvard University, where he eventually earned his Bachelor of Arts degree in physics in 1980.  Three years later, In 1983, he went on to receive his 'Master of Arts' degree in astronomy at the University of Texas at Austin. In the following years, while under the supervision of Professor Michael Rich at Columbia University, he received both a Master and Doctor of Philosophy degree in astrophysics.

Tyson started writing science books early in his career, his first book, from 1989, was titled 'Merlin's Tour of the Universe.' It is a science fiction book in which the main character, Merlin - a fictional character from the Andromeda Galaxy - befriends many of Earth's most famous scientists. This was only the start for Tyson, from 1989 to 2012 he has managed to write 12 separate science books; mostly revolving around the subjects of astronomy and astrophysics, in 1998 he even wrote a companion novel to Merlin's Tour of the Universe which was titled 'Just Visiting This Planet: Merlin Answers More Questions about Everything under the Sun, Moon, and Stars.'  In 1995, Tyson began writing a column for the Natural History magazine, merely called "Universe" (many of the archived articles can still be viewed here).  While working on his thesis, Tyson observed at the Cerro Tololo Inter-American Observatory, a ground based optical telescope in the Coquimbo Region of Chile, during that time he collaborated with Calán/Tololo Survey astronomers with their work on Type Ia supernovae.

It was these papers that comprised a portion of the discovery papers that related the use of Type Ia supernovae to measure distances, which in turn, led to the improvement of the Hubble constant, and the discovery of dark energy later on. Because of this, in 2001, President George W. Bush Jr. appointed Tyson (along with the second man on the moon, Buzz Aldrin) to serve on the 'Commission on the Future of the United States Aerospace Industry' committee. Eventually, in 2004, he was subsequently appointed by the president to serve on the 'President's Commission on Implementation of United States Space Exploration Policy' board, shortly afterwards, he was awarded with NASA's 'Distinguished Public Service Medal,' the highest honors given to a civilian by NASA.

Neil deGrasse Tyson started working at the Hayden Planetarium in 1996, not long after receiving his doctorate, unfortunately I can not find anything that specifies exactly when he was appointed as the first Frederick P. Rose Director at the planetarium, a position that Tyson still holds today.

I was hoping to highlight Tyson's tenure with The Planetary Society; however, after spending a few days scouring the internet for information, I haven't honestly found a lot of useful info, I couldn't even find a date when he joined; however I imagine it was fairly early.  The Planetary Society, which was founded in 1980 by Carl Sagan, Bruce Murray and Louis Friedman, abides by its objective to advance the exploration of space and to continue the search for extraterrestrial life.  Tyson was the Vice President of the Planetary Society for three years, until in 2005, when he passed the torch to his friend and confidant, Bill Nye. Still yet,  Tyson has continued to use his prominence with The Planetary Society, in conjunction with his ability to describe scientific processes in a fairly easy to understand manner, to help educate the public on certain science-related issues.

Similarly, it should be no surprised to anyone that Neil is an outspoken advocate of the Penny4NASA campaign, which aims to increase the budget of NASA, thereby expanding its operations.  Currently, a lot of people believe that NASA's budget is something like 5 to 10 cents on the dollar; however this is horribly incorrect, as Tyson frequently points out.  Currently, the budget for NASA is half a penny on the dollar, a far cry from what people thought it was (this figure has currently changed as the budget was increased by 800 million dollars for 2014).  In March 2012, Tyson testified before the United States Senate Committee on Commerce, Science, and Transportation, that; "Right now, NASA's annual budget is half a penny on your tax dollar. For twice that—a penny on a dollar—we can transform the country from a sullen, dispirited nation, weary of economic struggle, to one where it has reclaimed its 20th century birthright to dream of tomorrow." A full written transcription of the testimony can be read, here.

Most people don't know this, but Tyson, a New Yorker, was an eye witness to the September 11th terrorist attacks on the World Trade Center. Living near what would come to be known world-wide as Ground Zero, Tyson watched the devastation as if unfolded.  His footage was included in a 2008 documentary, entitled '102 Minutes That Changed America', Tyson also wrote a widely circulated letter in response to the tragedy.

In March, the much beloved book and television series, Carl Sagan's 'Cosmos,' will see a continuance on Fox. Neil deGrasse Tyson will narrate the reboot. Seth MacFarlane (the brains behind 'Family Guy') and Ann Druyan (Carl Sagan's widow) are also intimately involved in the production of the series. Stay tuned!