NASA: SpaceX Only Has to Prove It Can Land Astronauts on Moon, Not Bring Them Home Again

"It’s going to be a skeleton because it just has to land. It does not have to take back off." 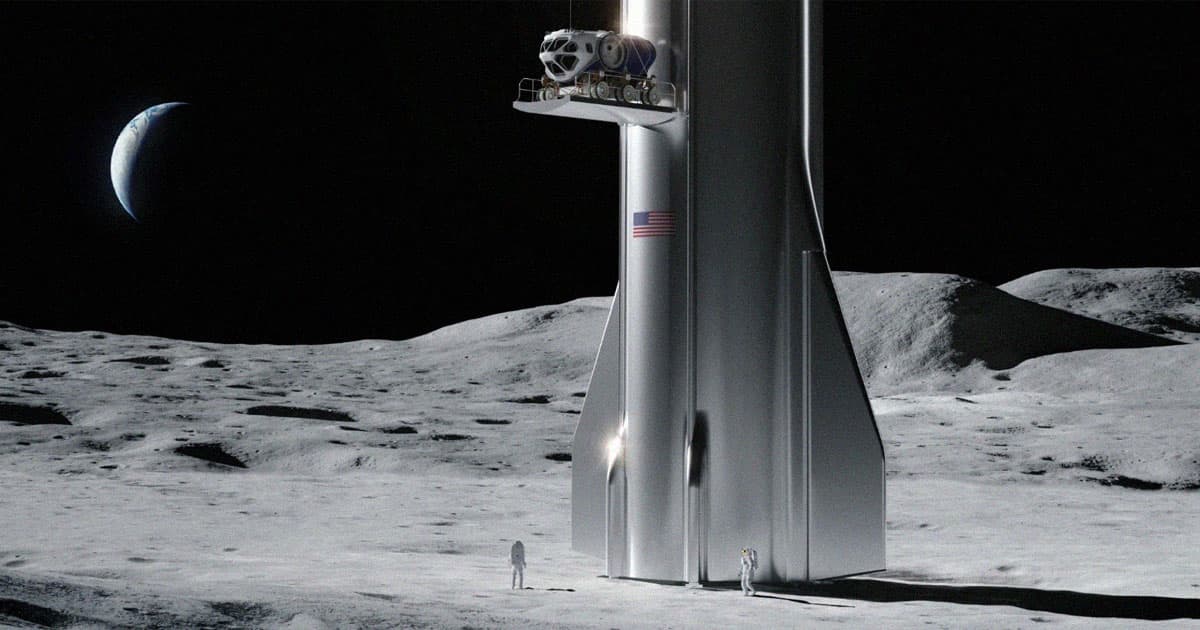 NASA says SpaceX is sending only a "skeleton" version of its lunar Starship spacecraft to the surface of the Moon during an upcoming, uncrewed test mission.

It'll be so stripped down, in fact, that it won't even be required to demonstrate that it can take back off after landing.

"For the uncrewed demo, the goal is to have a safe landing," said Lisa Watson-Morgan, manager of NASA's Human Landing System (HLS) program, during a presentation this week, as quoted by SpaceNews.

"The uncrewed demo is not necessarily planned to be the same Starship that you see for the crewed demo," she added. "It’s going to be a skeleton because it just has to land. It does not have to take back off."

Perhaps anticipating that her comments may stir some debate over whether SpaceX will actually be required to return astronauts safely, Watson-Morgan added that "clearly we want it to" take off from the Moon, "but the requirements are for it to land."

"We don’t tell them to do anything with it," Logan Kennedy, HLS surface lead at NASA, said at the event, referring to the Starship spacecraft once astronauts are returned from the Moon's surface. "That’s going to be up to SpaceX."

Back in 2021, NASA's HLS program chose SpaceX as its private partner for developing a spacecraft capable of returning astronauts to the Moon for its Artemis program.

Despite plenty of drama surrounding NASA's decision, SpaceX has emerged as the space agency's de facto collaborator, receiving billions in funding to turn its super heavy lift Starship into a lunar lander.

But Artemis 3, NASA's first planned crewed mission to the lunar surface, is still a long way out. And while SpaceX has made strides in developing Starship, it has yet to successfully launch it or its accompanying Super Heavy booster to orbit.

During the upcoming uncrewed mission, NASA and SpaceX may chose to take along "potentially one payload," according to Watson-Morgan, landing near the south pole of the Moon.

Artemis 3, however, will be far more involved. For one, there's the size of the Starship itself. Astronauts will have a very unique perspective once the 165 feet-tall spacecraft lands upright on the surface.

That also means getting in and out will prove a lot more difficult than simply climbing up and down the ladder attached to the outside of Apollo-era lunar landers.

SpaceX has been working on an exterior elevator that take crews down to the surface. The company already built a full-scale mockup of the system, allowing astronauts to test it out while wearing simulated spacesuits, SpaceNews reported that Kennedy said.

"It’s a very tall lander," Watson-Morgan said during this week's meeting. "It doesn’t look like the traditional landers that we’ve all seen in the past, so it can be hard to reconcile that mentally."

NASA and SpaceX have their work cut out for them. For instance, SpaceX is still figuring out how many Starship spacecraft it will have to launch into orbit to actually get to the Moon. The company is envisioning the spacecraft to also serve as a mobile fuel tank, providing a place for other Starship to refuel in orbit before headed to Moontown.

Last year, SpaceX CEO Elon Musk wagered a guess, estimating that it will take "max of eight" Starships worth of fuel to get to the Moon and back.

And then there's still the considerable task of safely getting humans down to surface, back into the spacecraft, and safely launch back into orbit — a gargantuan task in and of itself.