"Oh, Elon Musk was in my office pretty regularly." 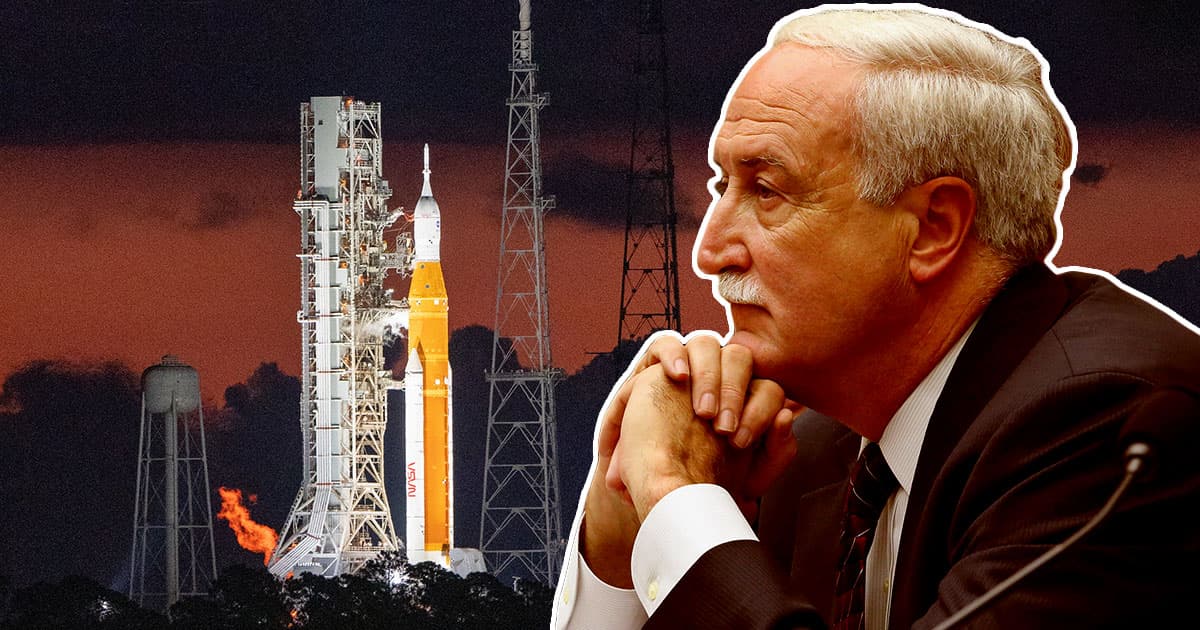 This week, space enthusiasts and a slew of celebrity guests gathered to watch the historic launch of NASA's Space Launch System (SLS), the staggeringly expensive rocket intended to launch American astronauts toward the Moon in just a few short years.

The only problem? The launch didn't happen. To get a sense of perspective, we called up Sean O'Keefe, who served as administrator of NASA from 2001 until 2004, to get the point of view of someone who was running the agency before the SLS was even under active development.

And yes, we couldn't help but ask about Elon Musk, NASA's tense relationship with Russia, and more.

Futurism: Obviously, we're speaking because the SLS launch didn't go off as planned. What do you think will happen if it doesn't get off the ground over these next few launch windows?

Sean O'Keefe: That's hard to speculate, because there is not a launch of any particular mission that I can recall during my tenure that ever went off on the date and time it was scheduled. Inevitably, there's all kinds of scheduling issues that come up if everything doesn't check out precisely. This is a very rigid process where everything has to work exactly as it's supposed to. It's a very, very disciplined process. So the amount of time, care and effort that goes into every launch is always a lot, and there are lots of stories of Apollo missions, the old Saturn V, for example, that took days and days and days before it finally launched.

This is not a new development, it's not something that cropped up. And this is a demonstration of the usual caution that the agency always employs. There's an overabundance of focus on the stuff that really requires diligence and care and attention to detail, where everything must line up just right, or they will try again another day until they do get everything right.

NASA has leaned hard into commercial space travel since your time there, with SpaceX now the main contractor sending American astronauts into orbit. Do you think that was a sound strategic shift, and where do you see it going next?

SO: In so many ways, everything SpaceX and Blue Origin are doing — developing rockets and the capability for spaceflight — is the same pattern and procedure that has been adapted over decades. And they're doing it much, much more efficiently, higher performance, all of that. But I don't know that it's going to be any more or less useful in that context, because it's still a major process improvement they're looking at, but not one that's revolutionary in that sense.

I take it that you're a SpaceX fan, or that you’re in favor of NASA's partnership with SpaceX?

Oh, yeah, sure. I think what they've done here is all what we envisioned 20 years ago, which is, how do you get out of this business of having NASA doing operational resupply missions and repetitive reuse? That's not what the government does. That's what industry knows how to do.

Some people have said there's been tension between some at NASA and SpaceX.

Oh, Elon Musk was in my office pretty regularly.

Really? Can you expound on that?

Oh, it was fascinating [laughs].

He was in his early forays trying to explore spaceflight, and we had conversations.

I'm sure there was plenty of friction. And I'll pass on commenting on that, that internal view. It’s always like that, anytime you get perceived competitors, and it's human nature to look at something or someone new and say, "Well, gee, no, this is our terrain, this is our turf."

So I’m really hung up on the image of baby Elon Musk taking meetings at NASA in the mid-2000s. Can you talk a little more about what those meetings were like?

It was an interesting exchange of trying to harness his aspirations, as he put it, of listening to his aspirations of what he was trying to think through. He’s an imaginative fellow, let’s leaving it at that [laughs].

He doesn't lack for energy, doesn't lack for confidence. And it made for some very interesting conversations in that respect. What he clearly articulated was an aspiration that we also had, on developing and trying to encourage the notion, not only with the legacy companies but a lot of other enterprises in the commercial world. The idea was, "Let's apply your thought and your skills towards solving problems or overcoming limitations, so that we can use them to get on with other exploration ventures."

Switching gears a bit, what do you think about Russia’s threats to abandon the International Space Station?

They have been threatening to abandon the ISS since the moment I walked into the agency, and probably had been since before I ever got there. It's standard theater, and I don't say that to be dismissive. Now, of course, one of those times when it feels like the sky is falling — it just might. But I just don't know when they're ever going to really pull the trigger, even though they talked about it endlessly.

I gotta level — our Russian colleagues at the time were incredibly diligent people, unbelievably professional. I was very much struck by the unbelievable commitment they made, the pride they have in their space program, and yet they're doing it with baling wire and duct tape. It's pretty rugged over there, it really is. They're doing things in a way that we never in a million years would have done them. I mean, it's just incredible.

Every time there was any kind of bilateral meeting between me and my counterpart, and I'm sure this was true for my predecessors and my successors, it always begins with a lecture from the Russian side, with this Rodney Dangerfield style and attitude. It was unbelievable. I had to sit there and listen to their grievances, their unloading of irritations and everything else. And this is the warm-up, this is the preliminaries. We're not getting anywhere until we get past this, and when they don't get their way, they threatened to do something that is positively preposterous.

It's been this way for as long as I've ever known, in every single occasion in which they didn't get the answer they wanted, they'd say, "Well, we'll have to reconsider whether we're going to withdraw." And our answer always was, "And where is it you might go?"  I mean, it's not like calling out for a pizza.

This whole relationship was put together to create a mutual codependency, and they know that. And that's part of their psyche on how to deal with that, so they always say "You depend upon us as much as we depend on you." And there's no question, that's true.

The best example that I can give you is, after the Columbia disaster in 2003, we grounded the Space Shuttle for two years, and needed to get through the whole process of figuring out, soup to nuts, everything that could possibly have contributed to this and correcting every one of them.

The Russian Soyuz rockets were a huge advantage, and the entire partnership with the Europeans and Japanese, the Russians, the Canadians, and us, the United States. The whole partnership really did depend on having that lift capability, because it wasn't like we could just say, "Okay, let's just put it on top of our own rocket and send it there," it wasn't going to happen. So this was something that was in everybody's best interest to get to it and figure out. We needed to lean on the Russians, because they had the only ability to fly, to do logistics, to send the groceries and to do crew exchanges for the Space Station.

The Russians, as I said, always started off every discussion by saying, "We need to change this agreement." And this time, they came to the table and said "We need for you, for the partnership, to pay us cash for flights of both the Soyuz as well as Progress vehicles," which were the unpressurized cargo flights that would go back and forth to the station. They said, "You had to pay cash." They weren’t getting a whole hell of a lot of money or support from the Russian government, then or now.

So our answer was "Hey, I'm perfectly happy to entertain that. And what I'll do is prepare an invoice for you that includes the cost of every cosmonaut who ever has flown on any Shuttle mission, I will simply deduct the cost of those flights from what it is that you're asking us to pay you now. So I assure you, you'll be paying us, not the other way around, because the cost of of that is substantially greater."

Needless to say, we never transferred a dime. That's for sure. And nobody ever paid us anything from the Russian side.

My final question is one we always have to ask space people: do you believe in aliens?

I think there have to be other life forms somewhere. Do I have anything to substantiate that belief? No, not a thing.

Is there anything really at Area 51? I’m sure there is, but I’d have to kill you if I told you [laughs].

More views from inside NASA: How NASA Got Price Gouged on the SLS, According to Its Former Second-in-Command