"Maybe you can find a job at McDonald's, if McDonald's still exists in Russia." 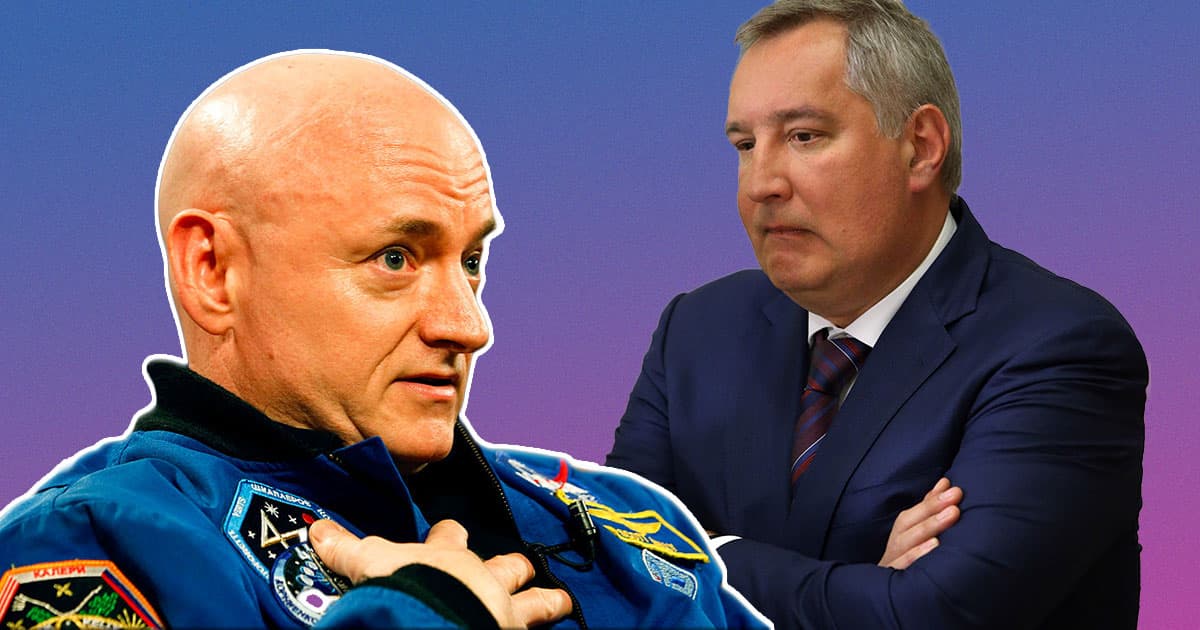 Former NASA astronaut Scott Kelly and Dmitry Rogozin, the head of Russia's space program Roscosmos, are caught up in a bitter feud on Twitter.

Kelly has been on a Twitter tirade ever since Russia invaded Ukraine, offering up links to Western media sources accompanied by context written in Russian — presumably an attempt to retaliate against Russia's efforts to curb free speech and the spread of information about its bloody war.

Rogozin is no stranger to making inflammatory remarks on Twitter. Given the predicament his country's space corporation now finds itself in — Rogozin has made sure to burn every last bridge with his comments — the new feud arguably tracks perfectly.

The feud started around the time when Rogozin gloated about removing the flags of foreign countries from a ready-to-launch rocket last week at the Baikonur Cosmodrome in Kazakhstan, one of the many recent signs of Russia actively distancing itself from cooperation with international space partners.

"Without those flags and the foreign exchange they bring in, your space program won't be worth a damn," Kelly tweeted in Russian at the time. "Maybe you can find a job at McDonald's, if McDonald's still exists in Russia."

No love has been lost between the two since, with Rogozin calling out Kelly as being "known for keeping a python at home and feeding him live mice" in a bizarre tweet on Monday. "The bet on the creation of national, Russian manned systems is now obvious to everyone."

Scott also posted screenshots of a Rogozin tweet in which he told the astronaut to "get off, you moron!"

"Dimon, why did you delete this tweet?" Kelly wrote in response. "Don't want everyone to see what kind of child you are?"

Kelly has been using his Twitter account to educate his Twitter followers about the atrocities taking place in Ukraine, and even which VPN services to use to get around the Russian government's internet blockades.

In one late February tweet, Kelly pleaded with Russian president Vladimir Putin to put an end to the violence.

"Mr. Putin, in 2011 I spoke with you from the ISS after my brother's wife was shot," he wrote at the time. "You seemed kind and sincere and asked what you could do for me."

"You can stop this madness," he added. "I'm afraid for the Ukrainians and for my Russian friends. Everyone will lose."

It's a sad state of affairs. With its violent invasion of Ukraine, Russia is actively cutting itself off from the international community.

Rogozin is only stoking the fire, and severing any ties the country's space program had left, with his comments. And feuding with former NASA astronauts likely won't help.

Read This Next
Round Trip
NASA Reveals Early Plans to Send Two Astronauts to Surface of Mars
Death Watch
Goodnight Sweet Prince: NASA is Officially Killing Its Mars Lander
Overloaded
Whiny Space Tourists Say They Were Too Busy on the Space Station
Mars Attack
Scientists Worried About Military Facility to Store NASA Mars Rocks
Scheming Dmitry
Former NASA Official Says Russian Space Head Is Trapped, Trying to Escape
More on Off World
Not It
Yesterday on the byte
SpaceX Replacing Defective Heat Shield Before Next Astronaut Launch
Not a Satellite
Yesterday on the byte
Scientists Intrigued by Strange Lights in Old Space Photos
Gourmet Roach
Yesterday on the byte
Someone's Selling NASA Moon Dust That Got Eaten By Cockroaches
READ MORE STORIES ABOUT / Off World
Keep up.
Subscribe to our daily newsletter to keep in touch with the subjects shaping our future.
+Social+Newsletter
TopicsAbout UsContact Us
Copyright ©, Camden Media Inc All Rights Reserved. See our User Agreement, Privacy Policy and Data Use Policy. The material on this site may not be reproduced, distributed, transmitted, cached or otherwise used, except with prior written permission of Futurism. Fonts by Typekit and Monotype.