Musings On Time: Why The Past, Present & Future Might Run Concurrently (Video) 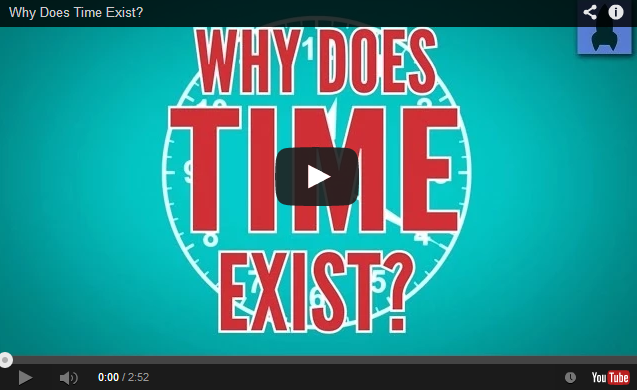 Our view of time, what it is and what it means, has evolved over the years (and one could even say that many of us have a romanticized it and made it into something very unscientific in nature). In the past, we measured the passage of time by following celestial motions. Morning, afternoon, twilight and the dead of night were judged based on the presence or absence of the Sun hanging in the skies. Then, on a larger scale, we measured weeks, months, and years by the progression of Earth’s stable orbit around the Sun. When we get down to the smaller units — like seconds and minutes (anything smaller than that is much more complicated) , things that essentially boil down to radial angle measurements  — we come full circle, once again tracing the radial motion of astronomical object across the sky, only we would divide said events into much smaller parts (however, such measurements weren't really in use until the 16th century, for obvious reasons).Delving deeper, when we measure, say, the speed of a car, we do so by comparing the motion of the car to the motions of a hand on a clock, then we essentially (and perhaps indirectly) compare both units to the location of the Sun as it moves across the sky. To simplify a complex matter, Craig Callender — a philosopher of science and professor of philosophy at the University of California, San Diego — compares time with a unit of motion: “Time is a way to compare or describe different kinds of motions like the speed of light, how fast a heart beats or how frequently earth spins around its axis," he says, "But these processes could be compared directly without making reference to time.” Following this interesting line of thought, time = change (this is made obvious to us with the presence of both motion and force). Thinking of the present as the sharp point of a recording needle gives us a generally realistic feel of time. However, it does not have a measurable duration, although we can measure the passage of time over hours, minutes, seconds, days and years. The past and the future are both measurable durations though. However, they can not be accessed. This suggests that our perception of time in regard to the past, present, and future could  just be one of many grand illusions our minds create as a means of making sense of the world around us. Similarly, we must recognize that we are all equipped with biology clocks, so-to-speak, even animals have their own ways of deriving this information, even if it isn't the same mechanisms we use. The always-incredible "It's Okay to be Smart" recently published a new webisode that illustrates the concepts we touched on above in a fun way.

WATCH: Why Does Time Exist?

WATCH: Why the Past, Present and Future are Playing Out at the Same Time (MinutePhysics)

For further reading, check out: "Is Time Disappearing From the Universe?", "Is Time Reality or an Illusion?", "Time Travel: More Possible Than You Think," and "How We Can Hide Events From Time,"