These are the 2019 stories we (along with the rest of the world) couldn't look away from. Read 'em and weep. 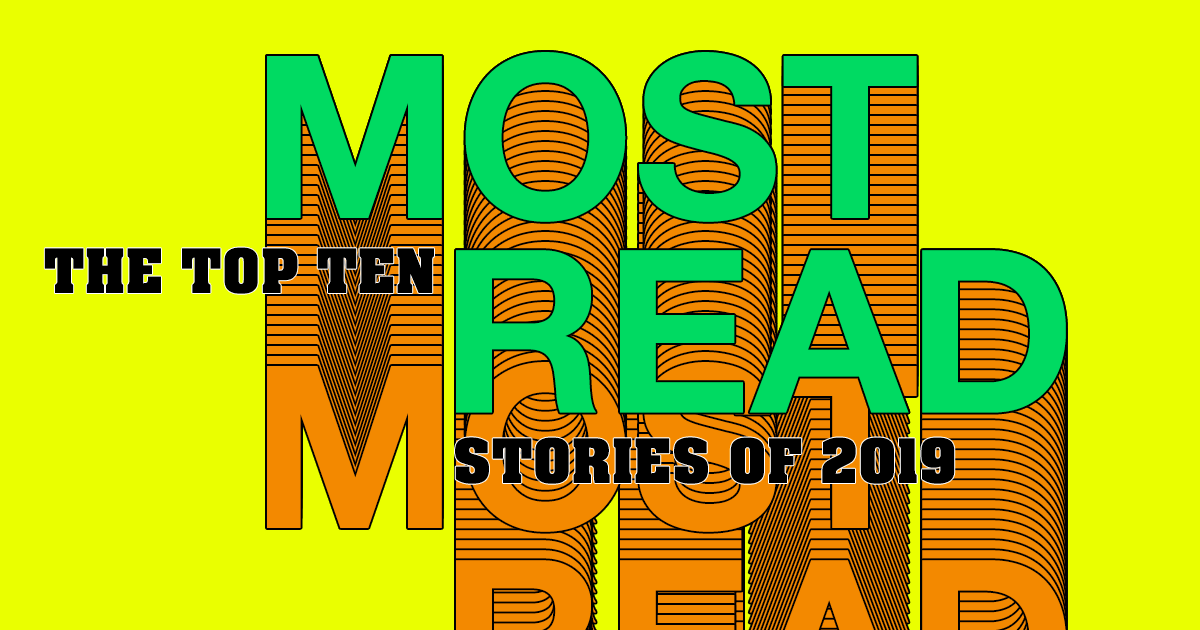 A WILD RIDE. Those, by and large, are the first words that come to mind looking back on Futurism's 2019 — and all the news that made up these past twelve months.

We ran thousands of stories this year. They ranged from investigative projects, to interviews, to the building blocks of our site: Sharp hour-by-hour analysis on the science and technology narratives of the day. These stories shaped (and are still shaping) the weird, wonderful, frightening, inspiring, and ever-critical present moment we're in, to say nothing of the future we'll occupy — on this planet or elsewhere.

That said: Every once in a while, one of these hundreds of stories exceeds our wildest expectations, drawing hundreds of thousands of readers from across the world, and for weeks at a time, too.

To that end and without further ado, here are The Ten Most-Read Futurism Stories of 2019 — along with our best guesses as to why they garnered so much attention, and what it might mean for our future.

10. The First Black Hole Photo Is Even More Amazing When You Zoom Out

What: After the Event Horizon Telescope team unleashed the first-ever image of a black hole, a separate team dropped an incredible follow-up image of the space around it.

Why: A sense of genuine epochal awe surrounded the release of the historic first image of a black hole, for starters. But when we covered NASA’s Chandra X-ray Observatory release of the wider shot, showing how distant galaxy M87's black hole was nestled in a boggling vast cloud of high-energy particles, our readers couldn't stop looking. Heck, neither could we.

9. Our Solar System Is Blanketed in a Giant Wall of Fire

What: Voyager 2 sent back readings suggesting that the edge of the solar system is surrounded by a bubble of 49,427 degrees Celsius (89,000 degrees Fahrenheit) plasma.

Why: We think of the deep solar system as a dark, frozen expanse, but this story showed that it’s a frontier of extraordinary unknowns that can apparently get, to put it lightly, hot. Even better, NASA’s best tool to plumb its mysteries is Voyager 2 — a probe that’s been traveling away from the Sun since 1977, giving the story an outrageous old-meets-new finishing coat.

What: NASA engineer David Burns said that his new thruster design could reach a ludicrous velocity — if you give it enough time to accelerate.

Why: The idea of light-speed travel scratches a sci-fi itch, and Burns has a knack for self-promotion. His thruster's undeniably clever — it would use a type of particle accelerator to manipulate the speed of an ion loop, subtly changing their mass through relativity effects, thus generating a gentle thrust without propellant. Give it enough time, according to Burns, and it could reach 99 percent the speed of light. The caveats? It’d require building an enormous device in space, and it’d take an extremely long time to speed up.

What: An Australian climate change analysis reached a “Mad Max” conclusion: We're screwed, and on a clock.

Why: The last year in news has often felt a touch world-ending, no? To say nothing of the world's ongoing fascination with post-apocalyptic fiction, from "Dawn of the Dead" to "The Hunger Games." The wide interest in this, though, illustrates our looming fear of a real collapse event — especially when the research comes from a former fossil fuel exec. The good news, according to the research, is that drastic environmental policies could pull the planet back in the right direction. Also, let’s be real: the art for this one, by Futurism writer Victor Tangermann, was haunting and beautiful.

Why: Everybody loves a feel-good story about a successful rocket launch or a shiny experiment on the International Space Station. But it’s difficult to ignore growing evidence that space is a hostile environment for the human body — and this study, which examined ultrasounds from astronauts who’d spent time on space station, showed signs of clots and bizarre blood flow. Needless to say, more research is needed, but this could be an opening act to the human space travel story narrative of this era.

5. Here Are New Pics of That Weird Substance China Found on the Moon

What: China baffled the world when it announced that its rover had found a “mysterious substance” on the Moon. Then it released a photo.

Why: The implication of China’s original announcement, which described the substance as “gel-like,” was that the material was deeply baffling. That’s probably why droves of Futurism readers visited to see the picture for themselves and share their thoughts — though, underwhelmingly, the consensus among researchers is that the material, rather than a gel, is probably lunar glass that formed during a meteor strike.

4. A "Dense Bullet of Something" Blasted Holes in the Milky Way

What: According to research by a Harvard-Smithsonian scientist, “a dense bullet of something” punched holes in our home galaxy many years ago.

Why: A lot of our most-read stories this year were epic in scope, but this galactic-scale mystery by Futurism writer Dan Robitzski might take the cake. Gaps in the stellar stream suggest that something — one culprit could be a chunk of dark matter, a million times the mass of our Sun — crudely tampered with the large-scale structure of the Milky Way. Just like our readers, we were obsessed — and we’ll be keeping an eye out for followup astrophysical research to share with them.

3. NASA: Four Astronauts Will Stay on the Moon for Two Weeks

What: NASA dropped tantalizing new details about its upcoming Moon missions, which include sending four astronauts to the lunar surface for 6.5 days.

Why: Our readers have a longstanding interest in NASA’s efforts to return to the Moon, so these rare specifics from the inscrutable space agency were irresistible. What’s more, this new info demonstrated the depth of NASA’s ambition: the 6.5 day mission, which will be loaded with at least four expeditions on the lunar surface, will be twice as long a Moon visit as any other in human history.

What: In the aftermath of a Russian submarine fire, rumors emerged in Russian media that the sub was on a mission to cut undersea internet cables.

Why: Remember the tragic fire that killed 14 Russian sailors this year? Observers pointed out that Moscow was unusually cagey about the incident, refusing to say even whether it had been a nuclear sub. And then, in a pair of bombshell reports, two Russian outlets reported that the vessel had been a secretive craft that’s long been speculated to have been designed to sabotage undersea internet cables. Much like other Russian drama in recent years, this one never got a satisfying conclusion — but it was a rare glimpse into the murky world of deep-sea espionage.

What: Chinese scientists made five clones of a monkey that had been gene-edited to suffer from serious psychological problems.

Why: Our most-read story all year took a dive into the lurid world of genetic engineering. Scientists in China tinkered with the DNA of a macaque monkey, and then cloned the animal five times — the first time a gene-edited primate had ever successfully been cloned. But ethically, Futurism's Kristin Houser explained, the experiment was a mess: the macaque’s genes had been altered to give it depression, anxiety, sleep problems and a schizophrenia-like condition. Researchers say the altered monkeys will be a valuable research tool for developing new therapies. But, at the same time, it’s a Jeff VanderMeer-esque sign of the grotesque frontiers of CRISPR — and, like our readers, we couldn’t look away.

Read This Next
*BRUSHES DIRT OFF OF SHOULDER*
Editor's Picks: The Futurism Team's 10 Favorite Tech and Science Stories of 2019
Thanks For The Memories
The Decade in Dumbasses: The Idiots, Morons, and Rubes Who Made the 2010s Insufferable
More on Future Society
Ring The Alarm
3:40 PM on the byte
Whistleblower Claims Facebook Can Secretly Drain Your Phone's Battery on Purpose
I Silence Thee
Jan 28 on futurism
Leaked Messages Seem to Show Elon Musk Using Twitter to Punish His Enemies
Gas Giant
Jan 27 on the byte
Journalist Eats Lab-Grown Chicken, Gets "Weirdly Gassy"
READ MORE STORIES ABOUT / Future Society
Keep up.
Subscribe to our daily newsletter to keep in touch with the subjects shaping our future.
+Social+Newsletter
TopicsAbout UsContact Us
Copyright ©, Camden Media Inc All Rights Reserved. See our User Agreement, Privacy Policy and Data Use Policy. The material on this site may not be reproduced, distributed, transmitted, cached or otherwise used, except with prior written permission of Futurism. Articles may contain affiliate links which enable us to share in the revenue of any purchases made.
Fonts by Typekit and Monotype.