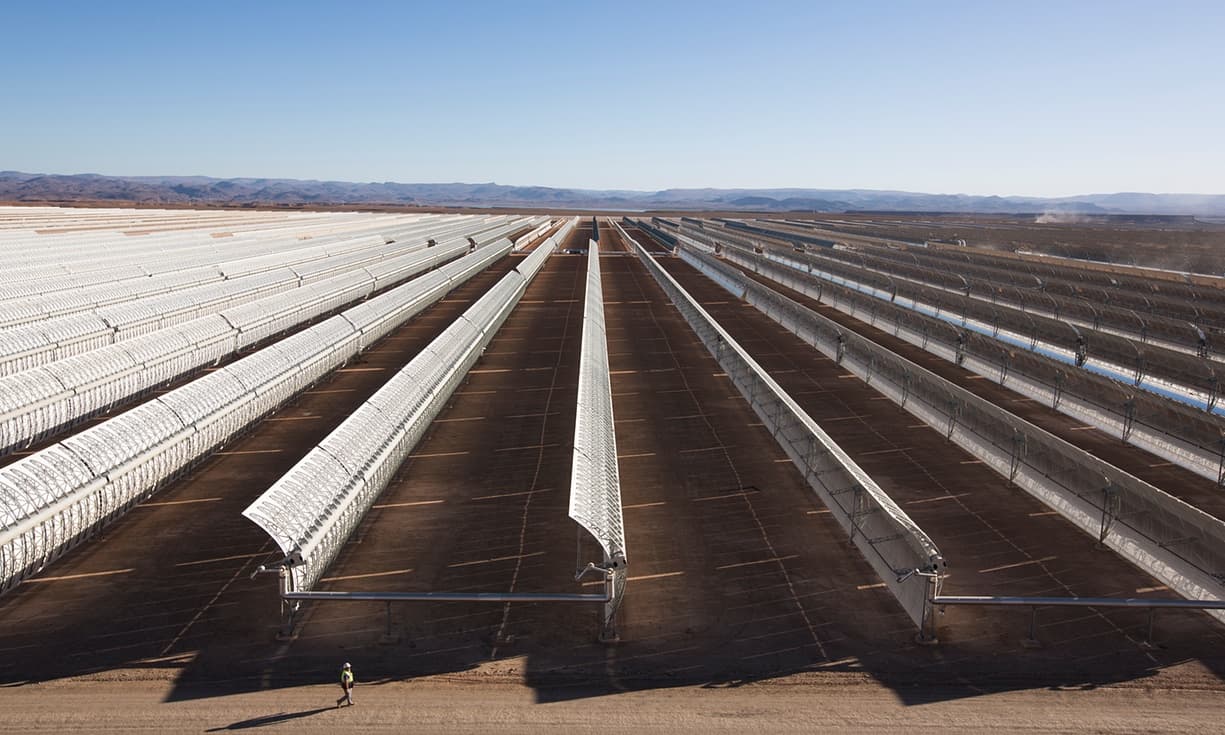 Ouarzazate, Morocco will soon be home to four linked solar mega-plants that are projected to supply half of Moroccos' electricity from renewables by 2020. Once complete, it will be the world's largest concentrated solar power plant. Phase 1 of the project is set to be up by next month and will consist of 500,000 solar parabolic mirrors. These solar parabolic mirrors are equipped with more advanced and expensive technology that can produce power even when the sun is down. Phase 1 has an expected capacity of 160MW. Phase 2 and 3 will open by 2017, and once all the mega-plants are up they expect to be able to generate 580MW of electricity - enough to power a million homes. $9 billion in funding has been given to this huge project.

The Possibility of Exporting Energy

Maha el-Kadiri, the spokesperson for the Moroccan Solar Energy Agency or Masen, says that it's definitely possible for them to export energy to other parts of Europe, but the interconnectors needed are still yet to be constructed. She says "specifically, we would have to build interconnectors, which would not go through the existing one in Spain, and then start exporting." Currently, Spain has put a halt to solar energy projects due to the lack of interconnections with France, but the EU has set the target that 10% of each country's power will be "transported abroad by cable by 2020." At this point Morocco would like to focus on meeting their own needs first, but they could ultimately become a major exporter of energy in the future.

Read This Next
FROM THE DEPT. OF THINGS TO BUY
The Best Solar Batteries of 2023
FROM THE DEPT. OF THINGS TO BUY
The Best Solar Panels for 2023
Futurism
Tesla Ventures Out of Automotive Industry; Enters the Energy Sector
Futurism
New Catalyst Lets Us Store the Power of the Sun
Futurism
The Fully Functional Airport That Runs Entirely On Solar Power
More on Robots & Machines
Blow Up Doll
Monday on the byte
Ukraine Accuses Russia of Using Inflatable "Dummy Tanks," Which Deflated
From the Dept. of...
Monday on futurism
The Best UPS Battery Backups of 2023
FROM THE DEPT. OF...
Jan 29 on futurism
The Best Netgear Routers of 2023
READ MORE STORIES ABOUT / Robots & Machines
Keep up.
Subscribe to our daily newsletter to keep in touch with the subjects shaping our future.
+Social+Newsletter
TopicsAbout UsContact Us
Copyright ©, Camden Media Inc All Rights Reserved. See our User Agreement, Privacy Policy and Data Use Policy. The material on this site may not be reproduced, distributed, transmitted, cached or otherwise used, except with prior written permission of Futurism. Articles may contain affiliate links which enable us to share in the revenue of any purchases made.
Fonts by Typekit and Monotype.