Miami Backed a City Crypto, Which Then Imploded and Lost 95% of Its Value 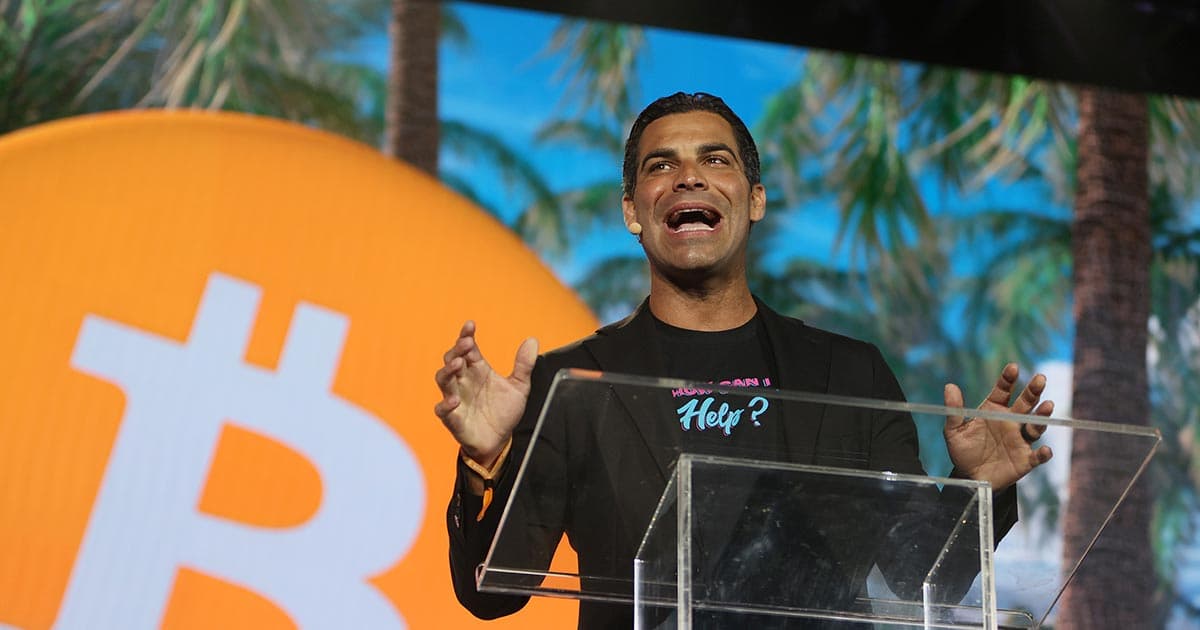 Mayors of several major US cities are noticeably quiet about city-based cryptocurrencies they once promoted as a solution to many of their municipalities' problems.

CityCoins, a Delaware-based startup, has convinced the mayors of cities including New York City and Miami to institute city-branded blockchain projects.

But Miami's crypto, dubbed MiamiCoin, has hit of a snag: its value has plummeted around 95 percent since peaking in September, Quartz reports.

Back in February, Miami cashed some of its MiamiCoin holdings out for the first time, a $5.25 million cash injection that mayor Francis Suarez called a "historic moment for our city."

Suarez went so as far to claim that MiamiCoin could eventually replace municipal taxes entirely last year, allowing the government to operate on its crypto holdings alone.

But that dream seems far more distant now that the value of the token is flatlining.

NYCCoin, the Big Apple's equivalent project from CityCoins, was once hailed as a way to "drive our city forward" by now-mayor Eric Adams. The token, however, has plunged 68 percent since Adams took office on January 1, according to Quartz, and the scandal-plagued mayor hasn't mentioned NYCCoin since.

Philadelphia arguably made the wiser choice, and ditched plans to adopt its own coin.

CityCoins like MiamiCoin are purely speculative assets, Quartz points out, that can't be used to actually exchange goods or services. Like most other cryptocurrencies, it's a highly volatile asset that's mined and traded by its investors.

There's some good news. Miami's earnings from its February sale may actually go towards a good cause, providing rental assistance to low income residents, according to the Miami Herald.

But given the coin's plummeting value, future revenues are anything but certain.

Mining the coin also happens to be incredibly difficult, with investors having to put up hundreds of dollars to what amounts to increasing their chances to win a raffle. The prize: the next block of the MiamiCoin blockchain, with the city taking a 30 percent cut of the winnings.

Critics of the venture argue it's sucking up far too many city resources. Besides, like all other cryptocurrencies, CityCoins' tokens operate in a regulatory vacuum, with federal agencies keeping close tabs on the startup's operations, according to Quartz.

Where that leaves the future of MiamiCoin is anybody's guess. Suarez isn't exactly so sure himself.

"I don’t know whether it’s going to work or not," the mayor told the Miami Herald in February. "Innovation doesn’t always work."

Read This Next
FTuxxed
Behind the Lawsuit Against Celebs Who Shilled FTX Before Its Spectacular Meltdown
Toes in the Water
Guy Linked to Huge Crypto Meltdown Says It’s Just a Coincidence That He’s Hanging Out in a Country With No Extradition to United States
Guest List
Celebrities Are Officially Being Sued by FTX Retail Investors
Tumblr or Bust
This Strongly Appears To Be Alameda CEO Caroline Ellison's Tumblr Account
Subway Menace
Tom Brady Appears to Be Totally Screwed by the FTX Collapse
More on Blocknik
Champagne Bathtubs
Yesterday on the byte
Miami Nightclubs Horrified That Big-Spending Crypto Bros Are Broke Now
Like Dominos
Yesterday on the byte
BlockFi Just Filed for Bankruptcy
Not GOATed
Yesterday on the byte
Crypto Guys Spend $600,000 on Hideous Wormlike Elon Musk Statue, Causing Their Coin to Crash
READ MORE STORIES ABOUT / Blocknik
Keep up.
Subscribe to our daily newsletter to keep in touch with the subjects shaping our future.
+Social+Newsletter
TopicsAbout UsContact Us
Copyright ©, Camden Media Inc All Rights Reserved. See our User Agreement, Privacy Policy and Data Use Policy. The material on this site may not be reproduced, distributed, transmitted, cached or otherwise used, except with prior written permission of Futurism. Articles may contain affiliate links which enable us to share in the revenue of any purchases made.
Fonts by Typekit and Monotype.