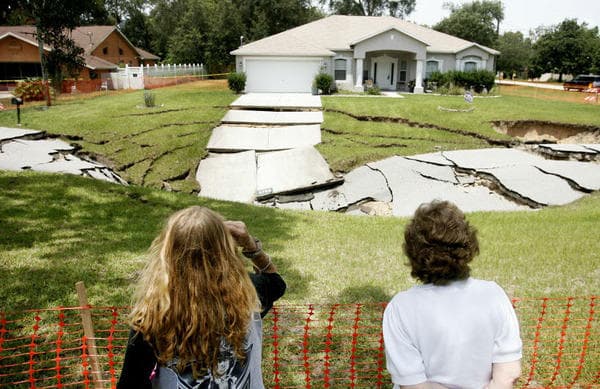 Late Saturday evening (July 19) in Spring Hill, Florida (a town that is just north of Clearwater) a giant hole opened in the Earth. This formation is known as a "sinkhole." Sinkholes can be as small as a car, or they can span hundreds of acres. Some dip just a few meters into the earth, while others are over 600 meters (2,000 feet) deep. These beasts have swallowed people, cars, trees, and even entire houses or city blocks. Sinkholes are terrifying; they are deadly; and they are almost entirely unpredictable.

Fortunately, the Spring Hill hole is only 12 meters (40 ft) wide and 9 meters (30 ft) deep, and it didn't open directly underneath any homes or buildings, which gave the residents inside time to evacuate. Unfortunately, the sinkhole grew since its initial formation, and the owners will not be able to reclaim their home. For the time being, it does not seem that this hole is a dire concern for local residents, though nearby homes have been declared "unsafe" until further testing is completed. Repairs are underway on a section of the road that was impacted.

Ultimately, this is just another reminder of how little we know about the ground beneath our feet.

Since 2010, nearly 300 sinkholes have opened Florida, leading to the apt name "Sinkhole Ally."

Sinkholes (also known as “sinks”) owe much of their creation to water. Most often, these gaping maws form because of the extreme erosion that is taking place in the rocks beneath the soil. Sinkholes generally develop slowly as bedrock is whittled away by water, but sometimes, when there has been enough erosion and the pressure is just right (or just wrong), the ground will give way all at once—swallowing trees, people, and anything else unfortunate enough to be standing in the immediate area. Of course, sinkholes are not terribly common. So you do not need to fear being consumed by the Earth while you sleep (though that’s exactly what happened to one man in Florida). In March of 2013 a large sinkhole opened near Tampa and swallowed a man as he slept in his bed. The 36-year-old man, Jeff Bush, died in the collapse. Unfortunately, his body was never recovered. Although the sinkhole was just 30 feet in width and 20 feet deep, under the edges, the hole spread to more than 100 feet.