5 of the most Amazingly Beautiful (and Absolutely Terrifying) Sinkholes 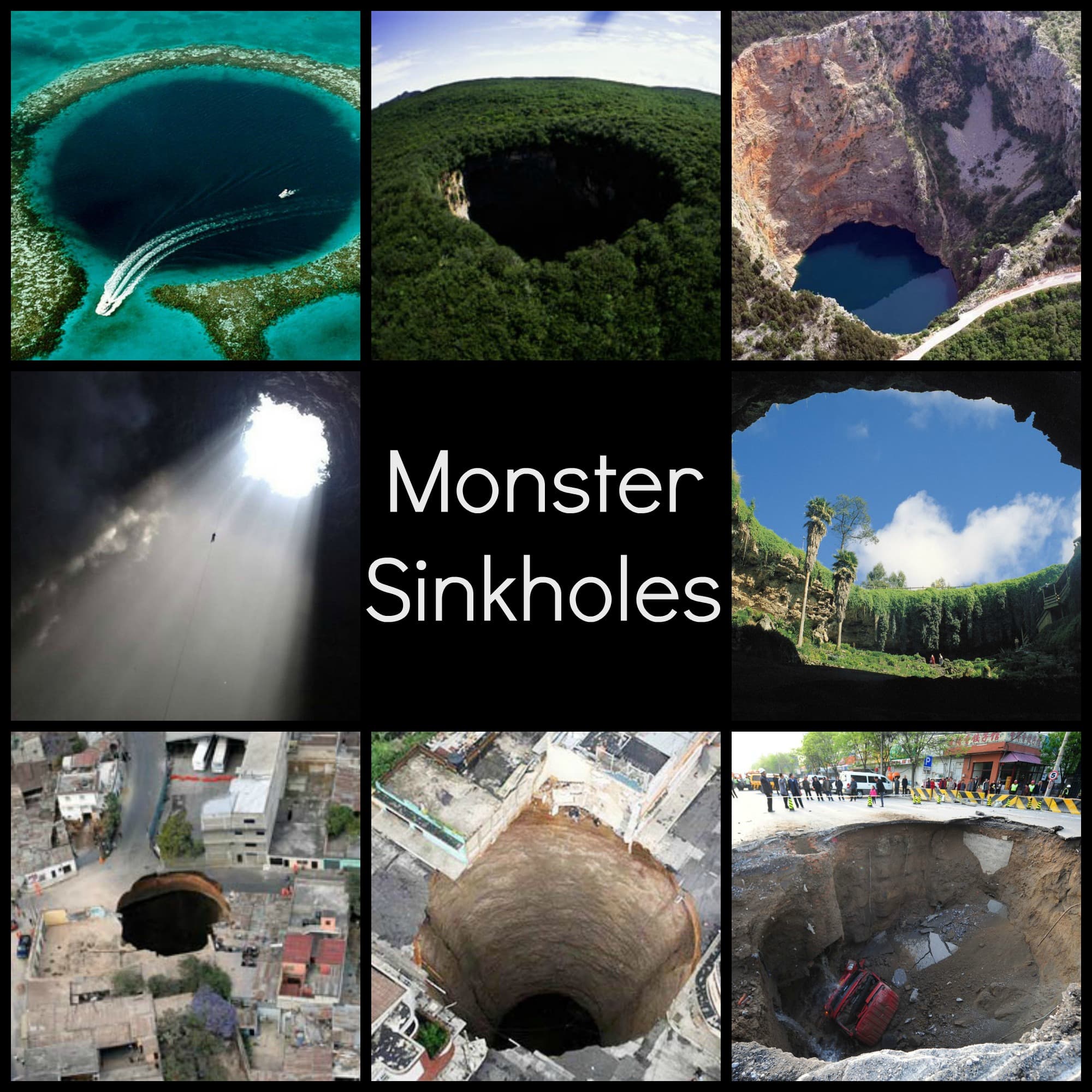 Life is rather chaotic. On any given day, we are plagued by a number of unexpected and frightening events—divorce, death, sickness, accidents—the list goes on and on. And this list doesn't even include any of the natural disasters that spring up: tornadoes, hurricanes, volcanic eruptions. Yet, when all is said and done, there is one thing you can rely on… the ground beneath your feet. Although it may quake and tremble from time to time, for the most part, we have solid soil to stand on. And even though the Earth my rumble, we know that it's not really going anywhere. At least, it seems that way... but unfortunately, the Earth is not quite as stable as it seems.

Sinkholes: These terrifying monsters are massive holes that open up in the Earth without warning. They can be as small as a car, or they can span hundreds of acres. Some dip just a few meters into the earth, while others are over 600 meters (2,000 feet) deep. These beasts have swallowed people, cars, trees, and even entire houses or city blocks. Sinkholes are terrifying; they are unstoppable; they are deadly; and they are almost entirely unpredictable. Sinkholes (also aptly known as "sinks") owe much of their creation to water.

Most often, these gaping maws form because of the extreme erosion that is taking place in the rocks beneath the soil. Sinkholes generally develop slowly as bedrock is whittled away by water, but sometimes, when there has been enough erosion and the pressure is just right (or just wrong), the ground will give way all at once—swallowing trees, people, and anything else unfortunate enough to be standing in the immediate area. Of course, sinkholes are not terribly common. So you do not need to fear being consumed by the Earth while you sleep (though that's exactly what happened to one man in Florida); however, it is extremely important for city planners to take erosion into consideration during the building process. Failing to do so has proven to have deadly consequences. But I digress...

Today, I would like to take a look at some of the most amazing and awe-inspiring sinkholes found around the globe. Let's start with the more picturesque ones that occur in wilderness. Since they are in remote areas, they generally don't involve death and destruction, so they aren't quite so horrifying—though they are still rather sublime.

The Cave of Swallows:

The Cave of Swallows is a huge sinkhole located in San Luis Potosí, Mexico. This massive beast is over 370 meters (1,2oo ft) deep. Ultimately, this epic size makes the massive hole the largest known cave shaft in the world. In fact, it is so huge, it could easily swallow the Eiffel Tower and still have room to spare.

Unsurprisingly, the Cave of Swallows has become a favorite site for adventurers and fans of extreme sports. Every year, individuals flock to this site to go base jumping. Although a free fall from this height is just a short 10 seconds, those who chose to go rappelling have a leisurely 20 minute descent before them, and climbing back out of the hole is no easy feat as it takes approximately an hour. This image looks picturesque (as do many of the other images of the Cave of Swallows), but looks can be deceiving.

Ultimately, the sinkhole is infested with a knee-high, insect-laced layer of bat guano (bat feces and urine). Since the cave is so cool and dark, it is a favorite locale of Mexican free-tailed bats. The cave is also home to a number of other bird species, who make their homes on the sides of the cave walls. Since there is such a high bat population, much of the exploration that has taken place here came about as a result of bird watchers and biologists interested in this specific field of study. In fact, although locals were aware of this cave for quote sometime, it wasn't explored until 1966 (which is just a couple of years before humanity first explored the Moon).

This hole, like many sinkholes, was created by water erosion over the course of many years. At the very base of the cave there is another sinkhole which goes down at least another 512 meters (1,600 ft), and there are a number of caves that branch off from this shaft. However, because the descent and ascent are so difficult, exploration has been very limited—this is one of Earth's final frontiers.

The Red Lake sinkhole is an enormous hole that contains (you guessed it) a lake. However, this lake is a rather ordinary color blue, and not red. So, why the confusing and misleading name? Well, the name isn't really misleading; it's just misunderstood. The name is "Red Lake" because of the reddish cliffs that surround the sides of the sinkhole. But despite the ordinary colored water, this sinkhole is quite unique. The vertical walls that line the sinkhole are about 290 meters (950 feet) in height; however, the lake stretches much deeper than this. With a total explored depth of approximately 530 meters (1,700 feet), and with a volume of roughly 25–30 million cubic meters, the Red Lake is the third largest sinkhole in the world.

There are a number of underground waterways in the Red Lake sinkhole. Ultimately, it is believed that these pathways link to other nearby rivers. However, scientists have yet to complete a thorough examination of this lake. As such, the exact connections remain unknown (another final frontier... are you noticing a trend here?). Of course, exploration must be completed with care, as this sinkhole is one of the last known habitats for a threatened species of river fish—Delminichthys adspersus. As you can see from the image, Red lake is rather circular; however, one of the vertical walls is extremely slanted as a result of a collapse during an earthquake in 1942.

The Great Blue Hole is an enormous submarine sinkhole that is located off the coast of Belize. To the untrained eye, this dark depression looks almost perfectly circular in shape... and to the imaginative eye, it looks like an aquatic doorway to the underworld. The deep blue color may look a little intimidating, but the color of the hole is merely a contrast between the massive pit and the lighter, white carbonate sands of the surrounding seafloor. In truth, this sinkhole is not a pit of death. Rather, the water is home to many varieties of marine species.

Scientists estimate that this formation began to take shape (creating a deep depression in the earth) some 153,000 years ago with the collapse of an ancient cave system, the top of which was worn away by erosion and caused a large section to collapse. Ultimately,  this deep, blue beast is over 300 m (984 ft) across and 124 m (407 ft) deep. The extreme width makes this site the widest ocean sinkhole in the world, and unsurprisingly, it is classified as a World Heritage Site by the United Nations.

This sinkhole is just one of several. Ultimately, there are four Sarisariñama Sinkholes that dot the landscape of Jaua-Sarisariñama National Park in Venezuela. The largest of the four is Sima Humboldt (pictured here). The upper rim (the opening cavity) of this hole is approximately 350 m (1,15o ft) across, while the base of the shaft is more than 500 m (1,640 ft) wide. Like many sinkholes, Sarisariñama gets much larger as it descends into the mountain. In fact, this sinkhole is so massive at its base that it has its own unique ecosystem, containing plants and animal species that are found nowhere else on Earth. These sinkholes are all located on top of a flat-topped mountain, which is nearly 2,350 m (7,700 ft) high.

Moreover, they are located in the middle of a remote rain forest, which makes travel to the sinkholes rather difficult, especially as the closest road is located hundreds of miles away. As a result, the sinkholes were not discovered until 1961, when a pilot happened upon them as he flew overhead. Like the previous sinkholes, the ones resting on top of Sarisariñama have not been thoroughly explored.

This is one of the more horrifying examples of a sinkhole. While all the previous occurred in, more or less, natural forested areas, this sinkhole opened up in the center of a city. Moreover, it formed almost instantaneously. Early in the morning on February 23, 2007 the ground gave way, and unfortunately, individuals in the area had absolutely no warning. As a result, 15 people were sucked down this dark shaft, which is more than 100 m (300 ft) deep. All of them perished. The Guatemala City sinkhole is approximately 18 m (60 ft) wide, which is just large enough to completely swallow a 3 story building, cars, telephone poles, and other objects unfortunate enough to be in the immediate vicinity.

This dark pit was created by the mass of water that came with tropical storm Agatha. However, Agatha isn't the only thing that had a hand in the creation of this sinkhole. Researchers assert that humans played a key role as well. Several geologists claim that leaky, underground pipes were probably responsible for much of the erosion.

As previously noted, sinkholes are formed when heavy, water-saturated soil causes the roof of an underground cavity to collapse, or when water widens a natural fracture in bedrock—causing the small crack to erupt into a gaping maw; however, in order for a structure to be a true sinkhole, it must be naturally occurring (this is what differentiates sinkholes from things like collapsed mines). Consequently, some argue that this isn't a true sinkhole.