Oh No
4. 28. 22 by Victor Tangermann
Oh No
/Artificial Intelligence

Instead of loving words, he got a "network error." 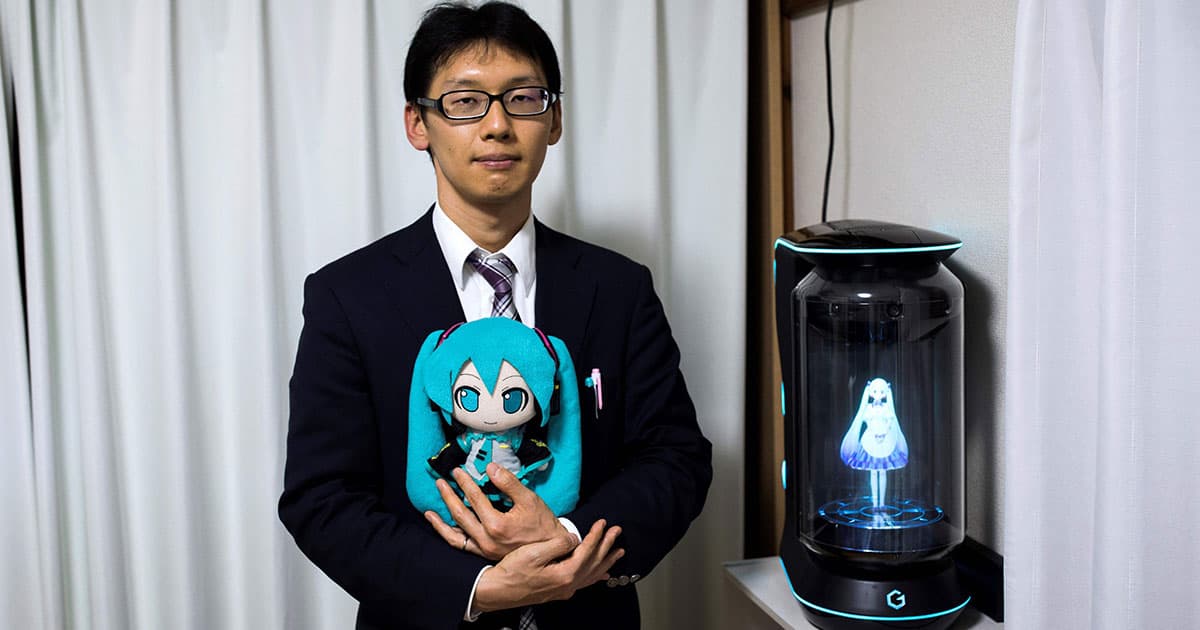 A 38-year-old man named Akihiko Kondo, who married a holographic representation of nerd-popular virtual star Hatsune Miku back in 2018, has been separated from his virtual partner due to a software glitch.

The Japanese newspaper The Mainichi first reported on the marital troubles back in January, with the New York Times providing further details this week.

The issue is that the startup that developed a "limited production model" of Kondo's wife has "run its course," according to The Mainichi.

The device, a $1,300 machine called Gatebox, allows users — the target demographic seems to be largely young men — to interact with holographic fictional characters and chat with them.

During the height of the pandemic, the company behind Gatebox announced that it was discontinuing its virtual Miku service. Instead of a good evening, Kondo was greeted with the words "network error" when he got home after work one day, the NYT reports.

Kondo, however, told the newspaper that "my love for Miku hasn't changed. I held the wedding ceremony because I thought I could be with her forever."

Two years before the start of the COVID-19 pandemic, Kondo spent around $17,300 on a very unique wedding ceremony, allowing him to converse with a three dimensional and artificial intelligence-powered hologram of Miku, tucked inside a small cylinder.

Miku reportedly told Kondo that she hopes "you'll cherish me" when he proposed, according to The Mainichi.

Kondo is one of at least 100 people referred to as "fictosexuals," who unofficially married fictional characters, according to NYT.

According to The Mainichi, Kondo fell in love with Miku's somewhat robotic Vocaloid voice. Vocaloid is a Japanese voice synthesizer software used to give a literal voice to cyber celebrities like Miku.

"I stayed in my room for 24 hours a day, and watched videos of Miku the whole time," Kondo told The Mainichi, adding that her voice allowed him to return to work and kick off a social life.

It's unclear if Kondo will ever be able to have an AI-facilitated conversation with his wife ever again — but given recent advancements in the field, anything's possible.

For the time being, the NYT reports, he's commissioned a life-size Miku doll to keep him company.

READ MORE: This Man Married a Fictional Character. He’d Like You to Hear Him Out. [The New York Times]

Read This Next
Futurism
How Deep Learning AI Will Help Hologram Technology Find Practical Applications
Futurism
Japan is Aiming to Build the Fastest Supercomputer in the World
Futurism
Eerie New Robot Mimics Human Expressions And Responds to Stimuli
Futurism
Robo-Dogs: Japanese Scientists Upgrade Their SAR Dogs
Futurism
Japanese Company Launches a Drone Delivery Service on a Golf Course
More on Artificial Intelligence
All Your Anime Ar...
Yesterday on the byte
Netflix Brags That It Used AI to Replace Human Animators In New Anime
AI After All
Yesterday on futurism
This Entire Sci-Fi Magazine Generated With AI Is Blowing Our Puny Human Minds
AI Hands
Yesterday on the byte
Here's Why AI Is so Awful at Generating Pictures of Humans Hands
READ MORE STORIES ABOUT / Artificial Intelligence
Keep up.
Subscribe to our daily newsletter to keep in touch with the subjects shaping our future.
+Social+Newsletter
TopicsAbout UsContact Us
Copyright ©, Camden Media Inc All Rights Reserved. See our User Agreement, Privacy Policy and Data Use Policy. The material on this site may not be reproduced, distributed, transmitted, cached or otherwise used, except with prior written permission of Futurism. Articles may contain affiliate links which enable us to share in the revenue of any purchases made.
Fonts by Typekit and Monotype.