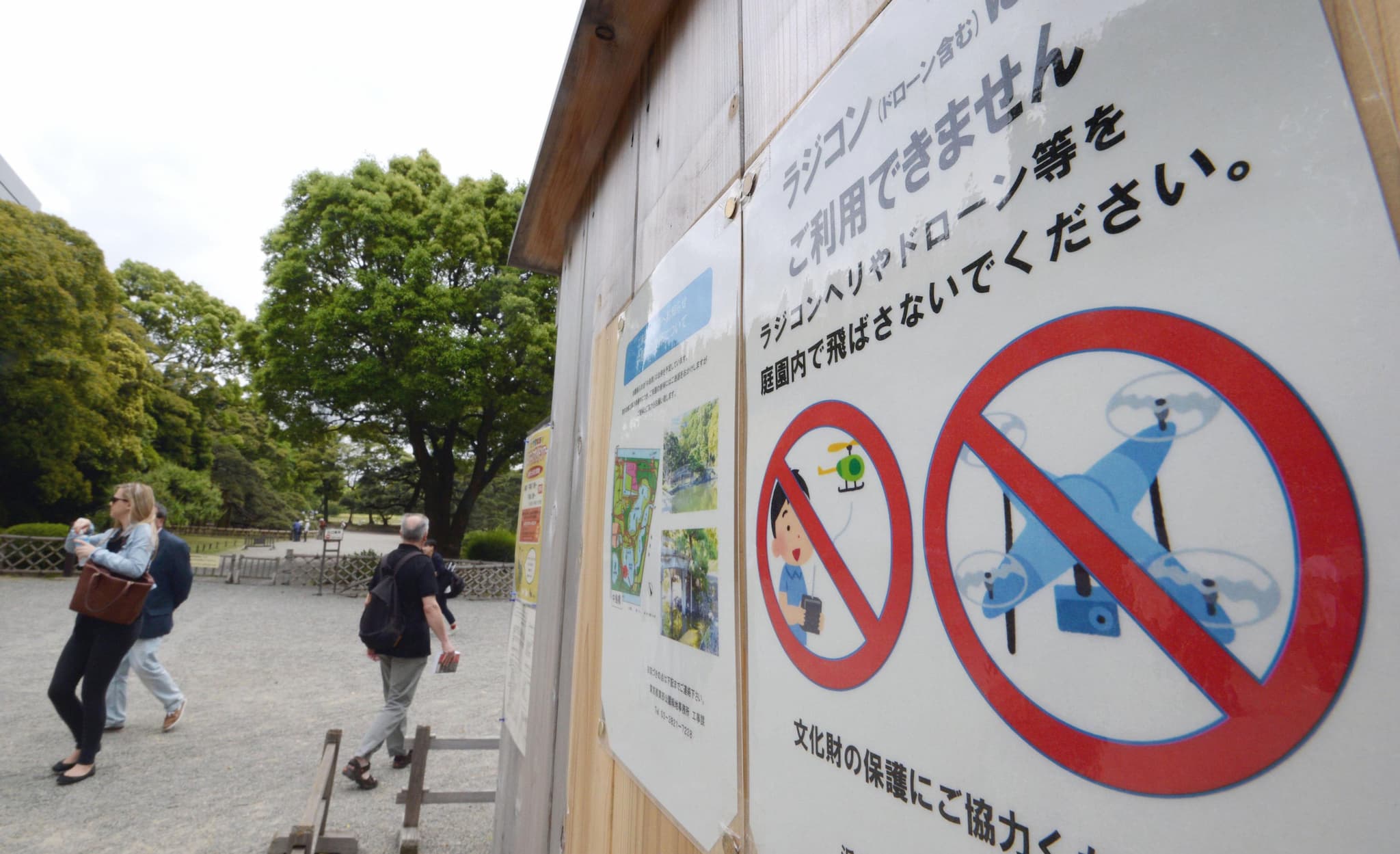 Image by The Japan Times

Being a drone enthusiast in Japan must be difficult, what with the laws banning flying drones over residential areas and offices without permission from the government and also the government's plans to require a license to operate drones that can fly over five kilometers.

While the operator of the drone that landed turned himself in, and it was later discovered that he was protesting Japan's pro-nuclear policies (not trying to kill anyone), it was more than enough to spur Japanese lawmakers to pass strict regulations that banned  drones across the whole of Tokyo.

Drone operators were required to maintain drones at least 30 meters from people, buildings, and cars, and they instituted bans from locations where large crowds are present, such as at festivals and exhibitions. A fine of a staggering ¥500,000 ( or $4200) is given to violators. The Japanese Metropolitan Police Department has also unveiled a drone designed to catch violators.

However, they are now currently mulling over a plan to use zoning laws to designated certain mountain areas and islands as “special drone zones" wherein testing may occur without endangering nearby cities and people. This change comes just three months after Prime Minister Shinzo Abe remarks that these regulations will be relaxed.

In these areas, regulations limiting the frequency where drones communicate and receive their directives are removed.

Drones in Japan are limited as to the power of their radio waves to a maximum of a three kilometer, while that of image transmission over a maximum distance of 300 meters. These regulations were put in place to avoid network interference, since the radio waves are sometime conducted over the 2.4-gigahertz band, the same band used by wireless networks.

WHAT THE DRONE ZONE CAN ACCOMPLISH

The municipal governments of Okutama, Hinohara, Aogashima and Ogasawara are part of the cities that have expressed interest. These special drone zones are schedule to established as early next year.

What these municipalities are planning are varied and interesting. In Hinohara, they are planning to utilize the drones to chase away monkeys from crops with sound emitting drones. The municipality of Okutama is looking to use them for disaster response by sending food and medical supplies to assessing damage. In the Osagawara islands, drones will be used to monitor islands designated as World Natural Heritage Sites.

A similar effort was also passed just two months ago in the city of Chiba wherein Amazon may be conducting drone delivery trials. The maximum altitude limit for drones were suspended as well as the line of sight requirement.

The Internal Affairs and Communications Ministry, which is the agency responsible for restrictions on the frequencies and power at which drones operate, is expected to approve the plan.

Read This Next
Oh No
Man Married to Hologram Can't Talk to Wife Due to Software Glitch
Futurism
Australia is Deploying AI Drones to Help Prevent Shark Attacks
Futurism
Japan is Aiming to Build the Fastest Supercomputer in the World
Futurism
Live Saving Medical Devices Could Soon Be Delivered By Drone to Heart Attack Victims
Futurism
Chipotle Once Delivered Burritos to Hungry College Students...Via Drone
More on Artificial Intelligence
We're in Hell
Yesterday on the byte
Scammers Are Already Convincing Idiots They Can Get Rich Using ChatGPT
Bing Bing Bing!
Yesterday on the byte
Microsoft Appears to Have Accidentally Launched New Bing With ChatGPT Functionality
Naughty Botty
Feb 4 on futurism
Amazing "Jailbreak" Bypasses ChatGPT's Ethics Safeguards
READ MORE STORIES ABOUT / Artificial Intelligence
Keep up.
Subscribe to our daily newsletter to keep in touch with the subjects shaping our future.
+Social+Newsletter
TopicsAbout UsContact Us
Copyright ©, Camden Media Inc All Rights Reserved. See our User Agreement, Privacy Policy and Data Use Policy. The material on this site may not be reproduced, distributed, transmitted, cached or otherwise used, except with prior written permission of Futurism. Articles may contain affiliate links which enable us to share in the revenue of any purchases made.
Fonts by Typekit and Monotype.