Life Exists in the Driest Desert on Earth. It Could Exist on Mars, Too.

Microorganisms could be thriving off of melting ice in the Martian soil. 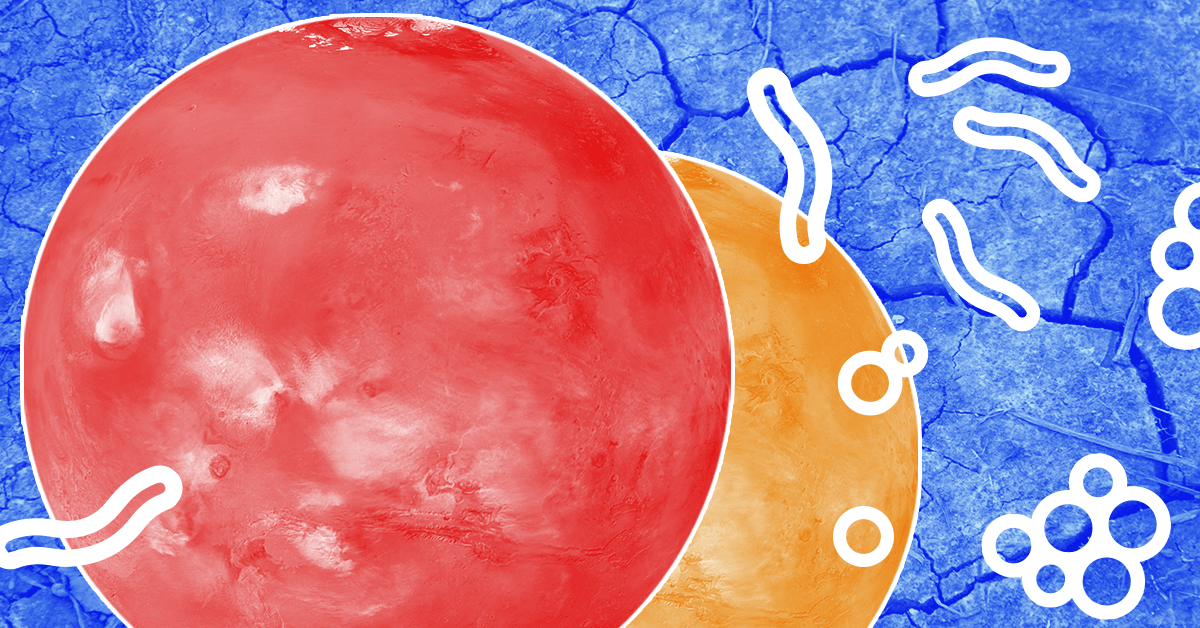 When we think of the potential for life on planetary bodies besides Earth, we automatically look for water. Whether it be growing at the bottom of Europa's ocean or swimming in Titan's methane lakes, we look for liquid because we understand the origins of life on Earth likely hinged on its abundant water. But a new study, led by scientists at Washington State University (WSU), suggests that life could exist with minimal water, even on planets as dry as Mars.

Published in the Proceedings of the National Academy of Sciences, the study examined the driest corner of the world's driest desert — South America's Atacama Desert. Here, decades pass with no rain, and it's dry enough to be analogous to the surface of Mars.

Scientists have known that microbes exist in these extremely arid conditions, but they have been previously unsure of whether the microbes actually reside in this environment or are simply temporarily moved there by weather patterns. Within this study, the researchers concluded that this desert actually supports permanent microbial life.

The research team visited the Atacama in 2015 following an extremely rare rainfall, and detected a veritable boom of microbial life in the soil afterwards. When the team returned over the next two years, their samples showed the same microbial communities were still there, but had begun to dry out and go dormant, awaiting the next rain.

"It has always fascinated me to go to the places where people don't think anything could possibly survive and discover that life has somehow found a way to make it work," said Washington State planetary scientist Dirk Schulze-Makuch, in a press release. Schulze-Makuch led the study as part of his research into Earth's most extreme organisms, which could tell us something about life through our universe.

"Jurassic Park references aside, our research tell us that if life can persist in Earth's driest environment there is a good chance it could be hanging in there on Mars in a similar fashion," he said.

This doesn't mean that Mars is secretly teeming with life. However, it does point to the possibility. Because the Red Planet once held liquid water, Mars bacteria could have developed and then, as the planet dried out, evolved to adapt to a niche below the surface. Because Mars is so much colder, similar communities would likely have to live off the occasional melting of soil ice or snowfall on the surface.

The Washington state team will next be exploring extremely cold and salty locations on Earth to study more environments that could parallel those on Mars.

"There are only a few places left on Earth to go looking for new lifeforms that survive in the kind of environments you would find on Mars," Schulze-Makuch said. "Our goal is to understand how they are able to do it so we will know what to look for on the Martian surface."

Read This Next
Palliative Care
NASA's Mars Lander Refuses to Die Even Though It's Supposed To
Signs Of Life
NASA Seems Awfully Excited About Finding Organic Matter on Mars
Muellholland Drive
SpaceX Defector Is Aiming to Land on Mars Before Elon Musk
Mars Rock Blues
Mars Rock Samples Probably Won't Infect Earth With Deadly Martian Plague, Scientist Says
Carbon-Based
NASA Rover Finds New Potential Evidence for Ancient Life on Mars
More on Off World
Stones Unturned
Yesterday on the byte
New Project Scanning Old Data for Signs of Alien Civilizations
Crossover Episode
Yesterday on the byte
NASA Aiming James Webb at Asteroid as DART Prepares to Smash It
Sluggo Mode
Yesterday on futurism
SpaceX Has a Major Problem With Its Starlink Internet Connections
READ MORE STORIES ABOUT / Off World
Keep up.
Subscribe to our daily newsletter to keep in touch with the subjects shaping our future.
+Social+Newsletter
TopicsAbout UsContact Us
Copyright ©, Camden Media Inc All Rights Reserved. See our User Agreement, Privacy Policy and Data Use Policy. The material on this site may not be reproduced, distributed, transmitted, cached or otherwise used, except with prior written permission of Futurism. Articles may contain affiliate links which enable us to share in the revenue of any purchases made.
Fonts by Typekit and Monotype.