This could provide a window into the Red Planet's past. 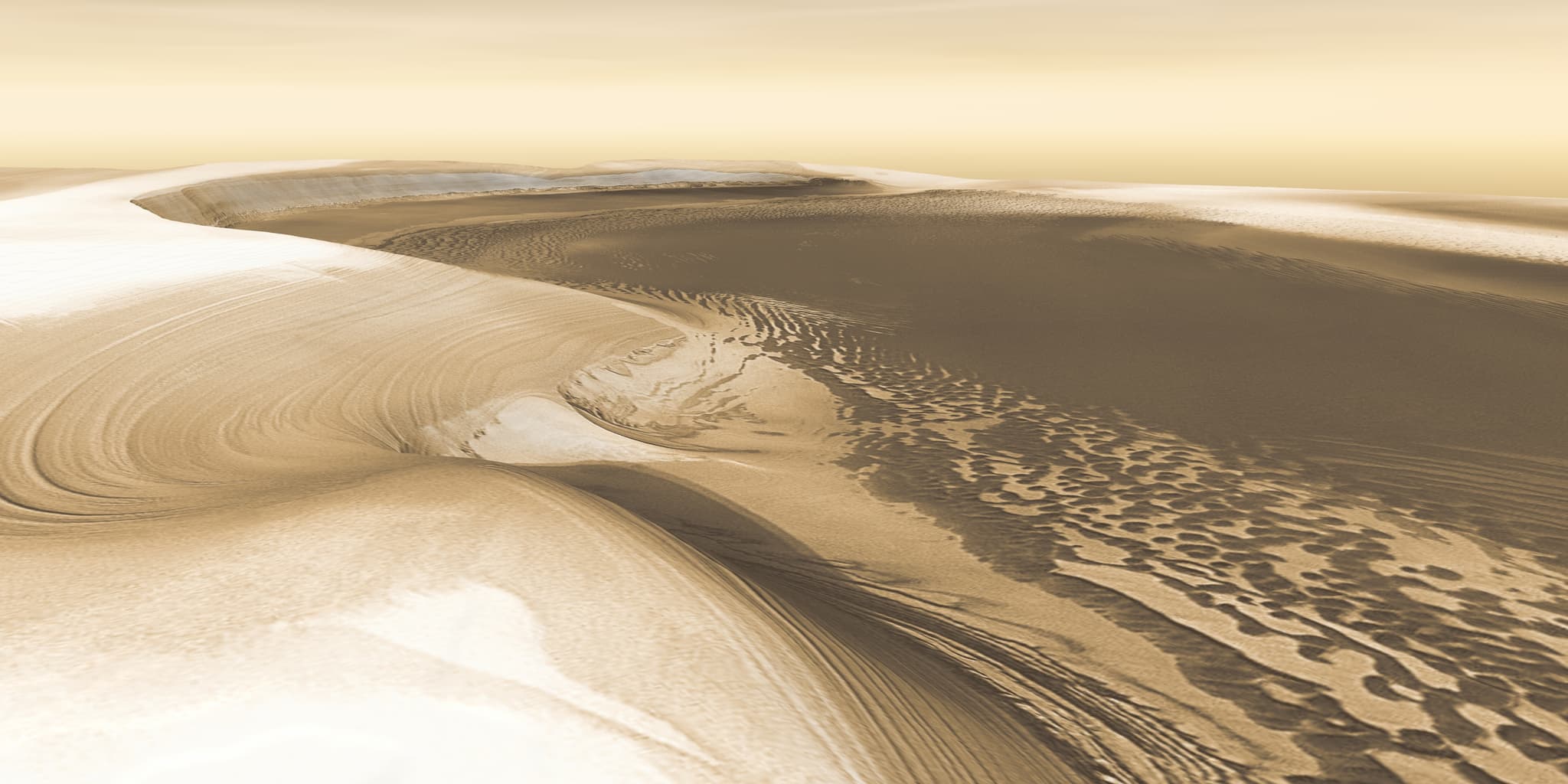 We've known for some time that huge deposits of water ice reside beneath the surface of Mars, but we didn't know much about its properties. Currently available methods of peering below the planet's surface can't access the depths where the water ice is present. Landers can dig down a few centimeters, and radar equipment can offer a look at what's tens of meters beneath, but we needed to see between those two areas. We needed to find exposed water ice.

Now, a team led by geologist Colin Dundas has done just that. Using the HiRISE camera on the Mars Reconnaissance Orbiter, they've pinpointed eight locations where large quantities of sub-surface ice have been exposed by erosion, leaving it accessible for further study.

Erosion has caused steep, pole-facing slopes to form at these locations, exposing water ice starting at depths of as little as 1 to 2 meters (3.2 to 6.5 feet) and extending up to 100 meters (328 feet) or more. The sites that have been spotted don't feature many craters, so the researchers believe the exposed water ice formed relatively recently.

According to Dundas and his team, the steep angles and fractures observed suggest that the ice is cohesive and strong. It's comprised of different bands and covers, which might indicate that it's made up of layers from snowfall that took place at various times. As a result, studying the exposed water ice could reveal how the climate of Mars has changed.

The images of the sites, which were captured over the course of three Martian years (almost six Earth years), demonstrate that huge chunks of rock fell from the ice as erosion took place. As a result, the team behind the study estimates that the ice is receding at a rate of a couple of millimeters (~.07 inches) each summer.

The discovery of this much exposed water ice opens up various possibilities for future research projects. It could also be a very useful resource for any future crewed missions to the Red Planet.

One of the biggest challenges of staying on Mars for any period of time is the pressure of taking everything necessary to support human life with us. If we could source our water from the planet, we wouldn't have to take as much with us when we departed from Earth.

Researchers believe the exposed water ice is relatively pure and likely more extensive than what we can actually see with the HiRISE camera. Unfortunately, the eight sites identified by the researchers are all within Mars' upper mid-latitudes, which can endure extremely low temperatures. Any manned mission is unlikely to target these areas.

Still, researchers plan to look for similar ice deposits in regions where humans may one day visit. They're likely to be much further underground, but the European Space Agency's ExoMars rover can drill down as far as 2 meters (6.5 feet), while NASA's Mars 2020 rover possesses an advanced ground-penetrating radar. The hunt for usable water on Mars is far from over.

Read This Next
Big Impact
Meteorite Hit Mars So Hard NASA Thought It Was a Quake
Palliative Care
NASA's Mars Lander Refuses to Die Even Though It's Supposed To
Signs Of Life
NASA Seems Awfully Excited About Finding Organic Matter on Mars
Muellholland Drive
SpaceX Defector Is Aiming to Land on Mars Before Elon Musk
Mars Rock Blues
Mars Rock Samples Probably Won't Infect Earth With Deadly Martian Plague, Scientist Says
More on Off World
Watery Grave
Nov 22 on the byte
Chinese Military Forcefully Seizes Debris That Philippines Recovered After It Fell From Space
Jetsam
Nov 22 on the byte
Lunar Lander Released by NASA’s Artemis 1 Mission Dies
Not Not Accurate
Nov 21 on the byte
Bad Guy in New "Indiana Jones" Movie Is Nazi Who Works at NASA
READ MORE STORIES ABOUT / Off World
Keep up.
Subscribe to our daily newsletter to keep in touch with the subjects shaping our future.
+Social+Newsletter
TopicsAbout UsContact Us
Copyright ©, Camden Media Inc All Rights Reserved. See our User Agreement, Privacy Policy and Data Use Policy. The material on this site may not be reproduced, distributed, transmitted, cached or otherwise used, except with prior written permission of Futurism. Articles may contain affiliate links which enable us to share in the revenue of any purchases made.
Fonts by Typekit and Monotype.