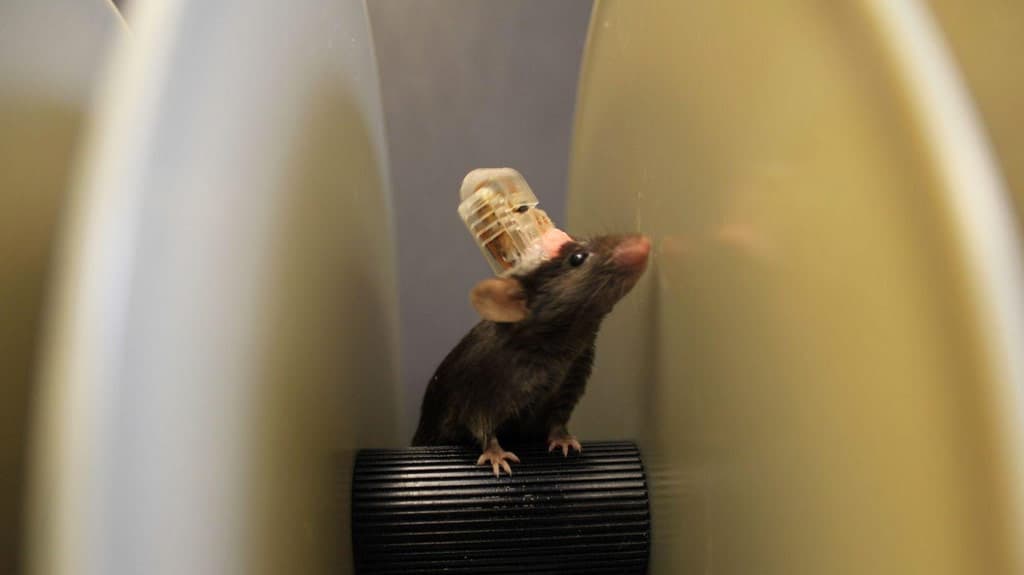 Light on the Brain

One of the main challenges faced in neuroscience research is figuring out a way to force specific groups of neurons to activate for observation. While some drugs and therapies using electricity can be used to fire up neurons, they are very limited in terms of specificity and often require the use of bulky electrodes placed on the scalp of the subject. Not ideal.

Enter optogenetics. This relatively new field combines neuroscience with genetics. In the 1970s, scientists discovered opsins, a type of proteins that were sensitive to light. Neuroscientists then found a way to include these opsins in the genetic code of specific neurons so that the neurons became active when struck by light. Scientists could then engineer test subjects with those modified neurons and control their brain activity using light.

The next part of the process was figuring out how to best deliver the light stimulus to the neurons, which has presented a challenge since you can't exactly place a lightbulb in the brain. Many solutions have been proposed, from running fiberoptic cables within the brain to implanting LED lights powered wirelessly by radio waves. With each new study, more is learned about how to best harness the potential of his new field of research.

Thus far, these experiments have only been conducted on mice and other animals, but from them, we have learned a lot about how our own brains work. We've been able to see how distinct parts of the brain function and how they interact with one another. We can fire up the neurons in the amygdala or the hippocampus and watch how it manifests in the actions of the animal, informing our understanding of the brain.

Perhaps one day optogenetics may be used in a human clinical trial. We have been finding ever more advanced ways to map out the brain, but that information would be much more useful if we knew which paths corresponded to which actions or emotions. Eventually, the technology could be used to create medications for any number of neurological disorders. We could find out which specific regions of the brain are active and communicating with one another when a person has symptoms of depression or Alzheimer's and create drugs that work specifically on those regions.

Read This Next
Woooaaah
Scientists: The Human Brain Has Odd Similarities to the Entire Universe
Brands We Love
Feel Like Your Memory Is Slipping? This Brain-Boosting Online Bundle Will Get You Back in Shape
Trippy Study
Scientists Made Mice Hallucinate by Shining Light Into Their Brains
Neural Pokédex
Scientists Identify "Pokémon Region" in Gamers' Brains — Seriously
Futurism
Brain Scans Of Stressed Pilots Uncover A Big Problem With How We Do Science
More on Hard Science
Tractor Beam
Jan 26 on the byte
Scientists Build Working Tractor Beam, Although It's Comically Tiny
Having a Blast
Jan 18 on the byte
New Study Shows Where You Should Hide to Survive a Nuclear Attack
Offworld Amino
Jan 15 on the byte
Scientists Find Building Blocks of Life in Meteor That Smashed Into Family's Driveway
READ MORE STORIES ABOUT / Hard Science
Keep up.
Subscribe to our daily newsletter to keep in touch with the subjects shaping our future.
+Social+Newsletter
TopicsAbout UsContact Us
Copyright ©, Camden Media Inc All Rights Reserved. See our User Agreement, Privacy Policy and Data Use Policy. The material on this site may not be reproduced, distributed, transmitted, cached or otherwise used, except with prior written permission of Futurism. Articles may contain affiliate links which enable us to share in the revenue of any purchases made.
Fonts by Typekit and Monotype.