Whether or not the telescope launches this year, it sure has been fun waiting around. 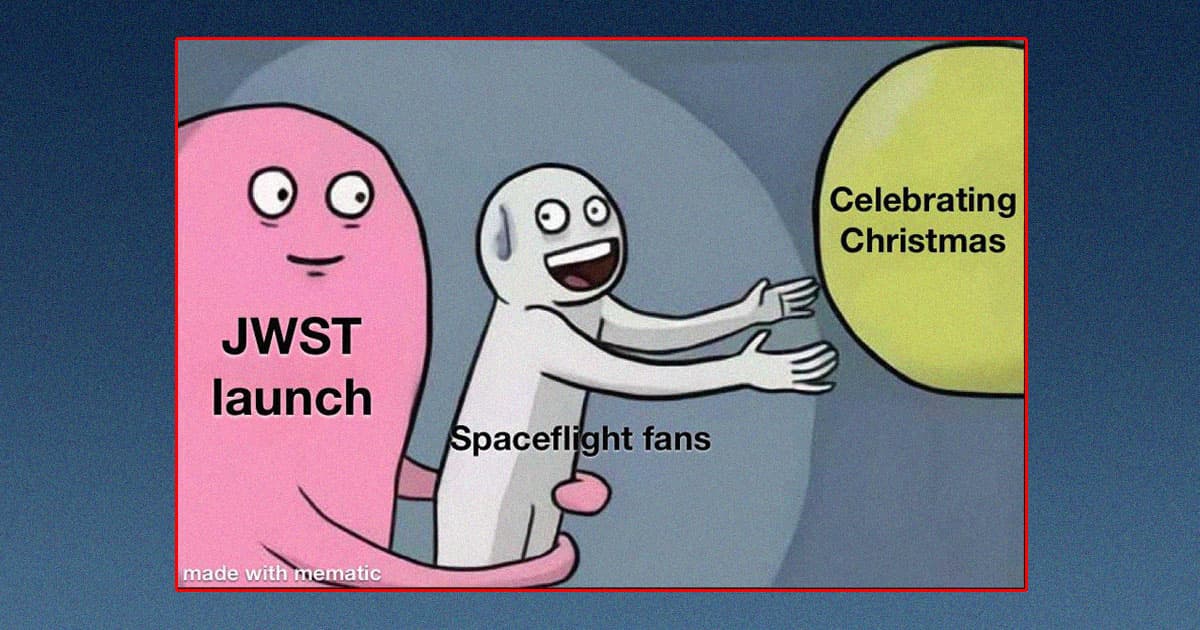 The world's newest space telescope, decades in the making, is supposedly going to take off on Christmas Day — and you best believe the internet has something to say about it.

NASA announced yesterday that the uber-expensive James Webb Space Telescope — controversially named after the former NASA administrator who also helped purge gays from the State Department — should be cleared for liftoff on December 25. As space-watchers' anticipation reaches a fever pitch, so too have the memes been flowing.

Here's some of our favs:

Posted on one of the dates the JWST was supposed to be launched, this cute little illustration feels like a double entendre because of Webb's homophobia. It might not have been enough to get NASA to rename the successor to the Hubble, but it sure did make this astrophysics fanart even more satisfying.

Referencing both the "photography is my passion"-ass photo NASA used to announce that it was delaying the launch of the JWST for the third time in six weeks and those launch delays themselves, this meme is meta, a primary flavor enjoyed by space nerds.

You Belong With Me

This crossover meme takes the lengthy timeline of the JWST's development and mashes it up with the pan-Twitter trend of threading random things that ostensibly "look like" usually-female celebrities. To their credit, this user was very thorough and saw it all the way through.

me at outreach event that started at 7:00 pm blissfully unaware:#JWSTLaunchMemes pic.twitter.com/mE20gqEmd0

Because the JWST schedule has been repeatedly "slipped" — NASA parlance for delayed — this one speaks for itself, and is even funnier to see on yet another missed scheduled launched day.

If the telescope does, in fact, end up being launched on Christmas, it will invariably be a gift to humankind — but there's no reason memers can't have a little fun with it.

Read This Next
Psychological Warfare
Experts Excoriate NASA Report Claiming James Webb Wasn't Homophobic
Origins Machines
The JWST's Data Is So Incredible That Even Those Who Built It Are Questioning Previous Science
Accuracy Wall
Harvard and MIT Scientists Warn That James Webb Data May Not Be What It Seems
Tada!
NASA Officially Unveils First Set of Dazzling James Webb Images
And Beyond
How NASA Got Price Gouged on the SLS, According to Its Former Second-in-Command
More on Off World
Killernova
Yesterday on the byte
Scientists Find "One in Ten Billion" Star System Primed to Explode in Titanic Kilonova
Lonely Planet
Feb 5 on futurism
Scientists Find Nearby Planet the Same Size of Earth, Plan to Search It for Life
Take Cover
Feb 4 on the byte
Space Startup Blows Up Another Giant Inflatable Space Station Module
READ MORE STORIES ABOUT / Off World
Keep up.
Subscribe to our daily newsletter to keep in touch with the subjects shaping our future.
+Social+Newsletter
TopicsAbout UsContact Us
Copyright ©, Camden Media Inc All Rights Reserved. See our User Agreement, Privacy Policy and Data Use Policy. The material on this site may not be reproduced, distributed, transmitted, cached or otherwise used, except with prior written permission of Futurism. Articles may contain affiliate links which enable us to share in the revenue of any purchases made.
Fonts by Typekit and Monotype.