Is the Universe Unnatural? 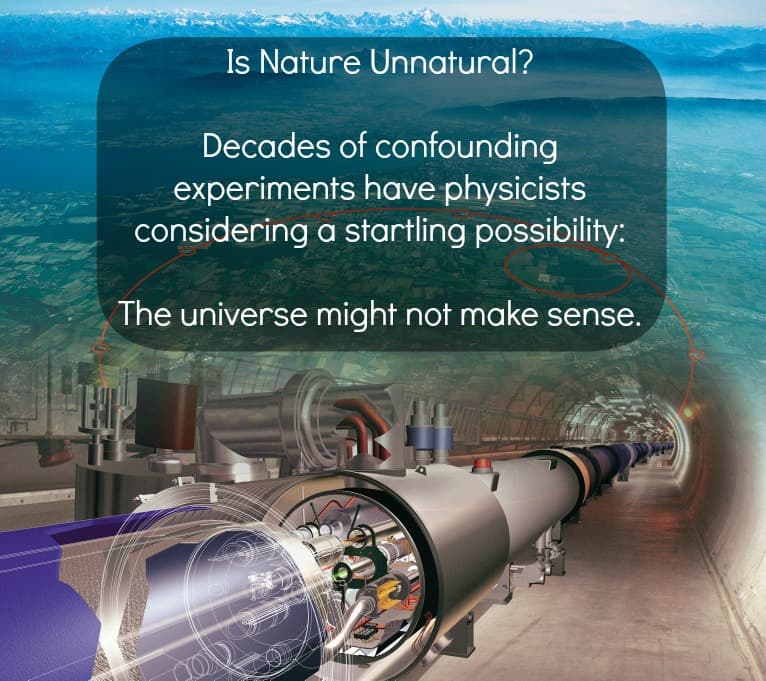 There is a question that is beginning to haunt the world of science; it’s been rearing its ugly head for the last several decades. The question is simply, "is the universe unnatural?"

As most of you are aware, particle physicists at the Large Hadron Collider (LHC) announced in July of 2012 that they had finally discovered the elusive Higgs boson – that discovery has since been confirmed. The confirmation of the Higgs' existence was one of the greatest triumphs of science in 2012, confirming the nearly 50-year-old theory that aims to explain how elementary particles have mass. Arkani-Hamed from the Institute for Advanced Study explained, “the fact that it was seen more or less where we expected to find it is a triumph for the experiment, it’s a triumph for the theory, and it’s an indication that physics works.”

This discovery, however, was a double edged sword.

The Higgs has gotten all of the media attention; however, quantum theories also suggest that scientists should have found a host of other particles along with the Higgs in order to really show that the whole theory makes sense. Thus far, these particles haven’t been found. That might not sound like a big deal, but without these accompanying particles, using our current understandings of quantum theory, the Higgs’ mass in reality is exponentially different than what is predicted by the modified theories.

The LHC has been nothing short of a revolutionary force in advancing our understanding of the cosmos. Many times, revolutionary understandings present uncomfortable truths; because the LHC did not find the particular zoo of particles scientists were looking for, it’s forcing a large number of physicists to grapple with the idea of an unnatural universe. Hope is not lost for a natural order though. The LHC will start smashing protons together again in 2015 in a final search for answers and naturalness. If the search turns up empty handed, what will happen then?

Firstly, it’s very probable that the multiverse theory will take center stage as one of the most plausible models explaining our universe. If the universe is unnatural, and contains arbitrary constants that allow for conditions in our universe perfect for life to arise, physicists reason that, in order to balance out the improbability of such a universe, there must be other universes with differing laws of physics. One such hypothesis containing a multiverse construct, string theory, theorizes about 10^500 multiverses exist. With so many universes, it is extremely likely that this random chance would eventually produce a life-favoring universe, and the rest is history.

String theory is an extremely polarizing hypothesis. You either love it or hate it. Edward Witten, also a physicist at the Institute of Advanced Study, said, “I would be personally happy if the multiverse interpretation is not correct, in part because it potentially limits our ability to understand the laws of physics.”

All of the weight of what happens next rests with the scientists at the LHC. Whatever they find (or, don’t find) in the next decade will fundamentally shape our understanding of absolutely everything. Scientists will probe the very heart of physics in an attempt to determine whether we live in an overly complicated standalone universe or if we simply exist in a very friendly bubble in a larger multiverse.

In case the doors of unnaturalness and naturalness both seem unfavorable, some physicists have envisioned a third door for a modified naturalness. The main proponents of this model are Joe Lykken of the Fermi National Accelerator Laboratory in Batavia, Illinois and Alessandro Strumia of the University of Pisa in Italy. The basic premise of this hypothesis suggests that scientists are misjudging the affects of other particles on the mass of the Higgs boson. Their idea is far from airtight, when additional particles are thrown in, such as dark matter, the model falters.

Strumia has said that he isn’t an advocate of the modified naturalness hypothesis, but he wants to open a discussion for the consequences of such a theory. Even though it has problems now, the same line of thinking could help to resolve some of the problems of seemingly arbitrary constants. Modified naturalness, and naturalness for that matter, has a much larger problem standing in the way. Neither can adequately explain why the universe didn’t annihilate itself in the big bang.

Is the universe natural, unnatural, or does it have a modified naturalness? The most exciting thing about that question is that we are on the brink of having an answer. Whether the answer is comfortable or uncomfortable, pleasant or unpleasant, desirable or undesirable, we are poised to head into a new era of scientific understanding.