How We Test Gaming Equipment

The method to our madness. 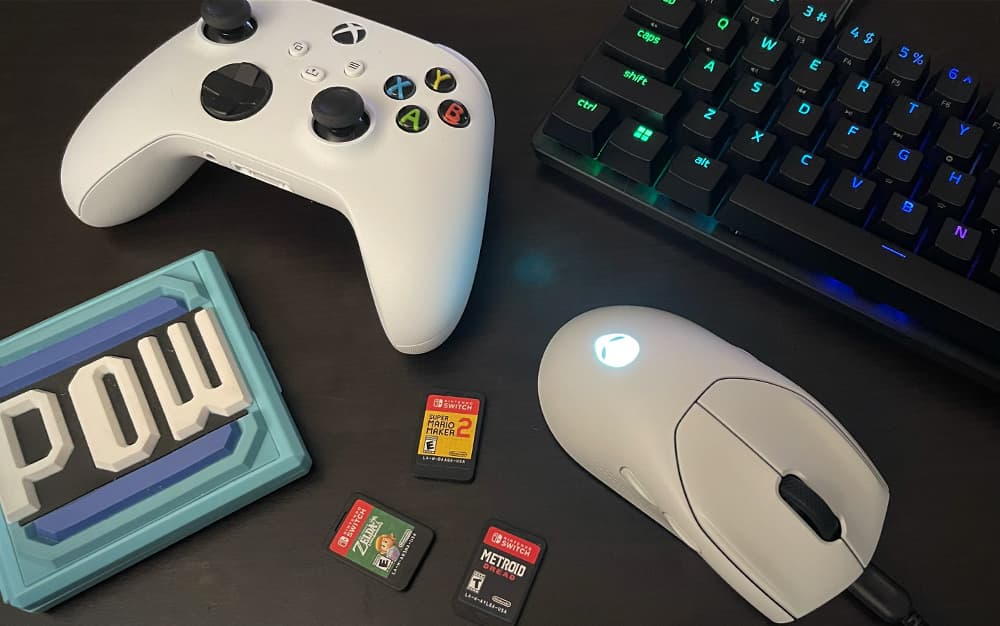 We’ve reached a point in history where just about everyone games. Sure, maybe mem mem and pep pep aren’t powering up “Crysis 3” in between episodes of “Monk,” but dollars to donuts they swipe through a smartphone and get their “Angry Birds” on when waiting in line. Face it, eventually, everyone is going to have to buy a piece of gaming gear, whether it’s a PS5 headset or the latest and greatest desktop monitors. Luckily for you, we review all manner of gaming tech on the regular around here, and here are some of the rubrics we use whenever we give stuff a spin.

How We Test Gaming Equipment

Before we get to the “how,” we should address the “what.” Gaming equipment is anything one uses to play a video game, on all platforms where games are typically played. This could include a flashy new peripheral like the Alienware Tri-Mode Gaming Mouse, or a full-blown console like the Nintendo Switch OLED. The net we cast is pretty wide. It could also easily cover the best gaming laptops and gaming chairs. After all, it never hurts to get some informed recommendations on what to buy when putting together a gaming rig.

How We Test Consoles

Sony PlayStation 5. Xbox Series S/X. Nintendo Switch. Each of these game consoles has its fanboys (myself included). But previous biases must be left at the door. A console must be judged alone on its technical specifications, and how these specs apply themselves to optimizing the gaming experience. This includes the processing and graphic output, but it also takes into account every aspect of the console and how it affects the way things play game to game. PS5 Dual Sense controllers feel wildly different from Joy-Cons and provide different levels of immersion. It doesn’t hurt if a console has some really stellar exclusives. When applicable, we use benchmark applications like GeekBench to truly gauge processing speed (CPU), frames per second (FPS), and color output. Here are a few things that are taken into account when reviewing consoles.

Playability: How do games play? Ideally, games are optimized for the system they are played on. If a game is console exclusive, does it take full advantage of the platform it’s on? Consider the way the DualSense 5 haptic feedback “Ratchet and Clank: Rift Apart” helps make the game as immersive as possible, or how satisfying a game like “The Legend of Zelda: Breath of the Wild” can be even in handheld mode on the Switch.

Versatility: Entertainment centers can get bogged down quickly with the amount of HDMI-enabled devices out there, from game consoles to streaming sticks, and even a few straggling cable boxes. Dedicating a display port to any console isn’t just a choice, it’s practically a real-estate investment. Can the console do more than simply play video games? With all the processing and graphic output Xbox, Sony, and Nintendo pack into their consoles, using them as standalone gaming consoles feels like a wasted opportunity.

Aesthetics: Any modern console worth its salt should look great. Of course, this is all relative. “Good” in the late ‘70s and early ‘80s meant “wood accents.” Head-turning potential aside, a console shouldn’t be cumbersome. These power-packed rectangles should ideally be able to rhyme with whatever display they’re hooked into, especially in the middle of a living or game room.

How We Test Games

“Every game has its place.” There are entire swaths of titles that hardcore gamers may scoff at, but we’re always down to keep an open mind. Sure, “Among Us” may not provide the same endorphin rush that “Elden Ring” provides, but there’s no denying the mobile game is perfect for busting out at dinner parties or family reunions. Having universal appeal is nice, but if a game provides a unique experience, it too deserves some consideration. There are entire genres that many might gloss over on their way to the latest Final Fantasy or first-party Nintendo release.

But even casual party games and sports titles should be graded on their own merits. “Does this game play well, considering its genre and target audience?” This is good. “Does this game break the mold so hard that it can appeal to just about anyone?” This is fantastic. In general, the more versatile, better bang for your buck a game is, the greater the chance is we recommend it. When possible, we play games across multiple platforms to glean which experience is best.

Immersion: Video games, like movies, television, and other artistic media are a form of escapism, and one of the best ways to unwind. Some games like “Silent Hill” are high in the tension factor, but that makes them better, not worse. If a game can pull feeling out of you, it’s done its job.

Gameplay: Whether you’re playing an indie game developed by one person like “Stardew Valley” or a multi-million dollar powerhouse like “Cyberpunk 2077,” a game lives and dies by the way it actually plays. Game difficulty runs the gamut from Kirby-easy to Dark Souls-hard, but the actual mechanics of how the game plays should be sound, and ideally follow the classic Nolan Bushnell Law of “Easy to pick up, difficult to master.”

Charm: Visuals are important, for sure. But a game hits hardest when it gives you butterflies. Do you plan new strategies for new runs in “Hades” when you’re not playing it, in the middle of the workday, writing an article for your job at a popular science website? Do you obsess over “Undertale” lore with friends at social gatherings? Does the game inspire passions to pour out of you, both positive and negative? Buddy, you’ve got a great game on your hands.

How We Test Gaming Accessories

Whether you game in a shared living room television or are fortunate enough to have a private gaming enclave, eventually, you’re going to need a second gamepad. But that’s just where the accessory adventure begins. We’re a ways off from the Rock Band era, where plastic drum sets and guitars clogged entire rooms only to be shoveled off to thrift stores years later. But even scaled-down accessories can bog down any gaming setup if you hoard enough of them. When testing any given accessory, from arcade sticks to Bluetooth headsets, one often overlooked facet must be considered: space. Real estate is pricey, whether it’s a desktop workstation or a drawer in an entertainment center. Nobody wants to have to untangle a hydra of cords every time they want to get in a few rounds of “Apex Legends” before bedtime. Of course, build quality and durability are important, as is the way any accessory being reviewed adds to the gameplay experience. Even the more affordable offerings will be put through the wringer to see if they can withstand hardcore gaming sessions and occasional “rage quits.”

Design: Some thought should be given to the way an accessory looks. We are long past the Madcatz dark ages. Like consoles themselves, storing a collection of gamepads, “game-enhancers” and other plastic peripherals shouldn’t be a chore in itself. It doesn’t hurt if an accessory looks good too, but as long as the design is sound, much of the over aesthetics can be left to be judged by the eye of the beholder. If the accessory is held, ergonomics should be taken into consideration. Gamepads, mice, and keyboards should feel comfortable to use for hours on end, and cramping should be a rare occasion, even for hardcore gamers. Accessories that require massive investments like OLED monitors will be scrutinized a little harder than impulse buys. Ideally, 4K and 8K monitors should do double duty as workstations, and their brightness and color capabilities should work without fail, whether you’re playing “Counterstrike” or editing in Final Cut Pro.

Versatility: This may not be a rule that everyone can or should follow, but I will never buy a new gamepad unless I can use it on at least two different platforms. It just doesn’t make economic sense. Yes, the second console in question is almost always “PC,” but peripherals being console locked is usually unnecessary. This goes triple for tech that should be universal, like audio accessories including headsets and microphones.

Durability: If any given controller can’t at least make it through an entire console generation, it doesn’t deserve to take up any space in any place other than a dumpster. This includes the device not shattering to pieces in your hands, of course. But it also includes control sticks not drifting, buttons having good response time, and wireless controllers not disconnecting.