Nintendo Switch OLED Review: A Must-Have for Gamers on the Go

Good as an upgrade, great for those jumping on the bandwagon. 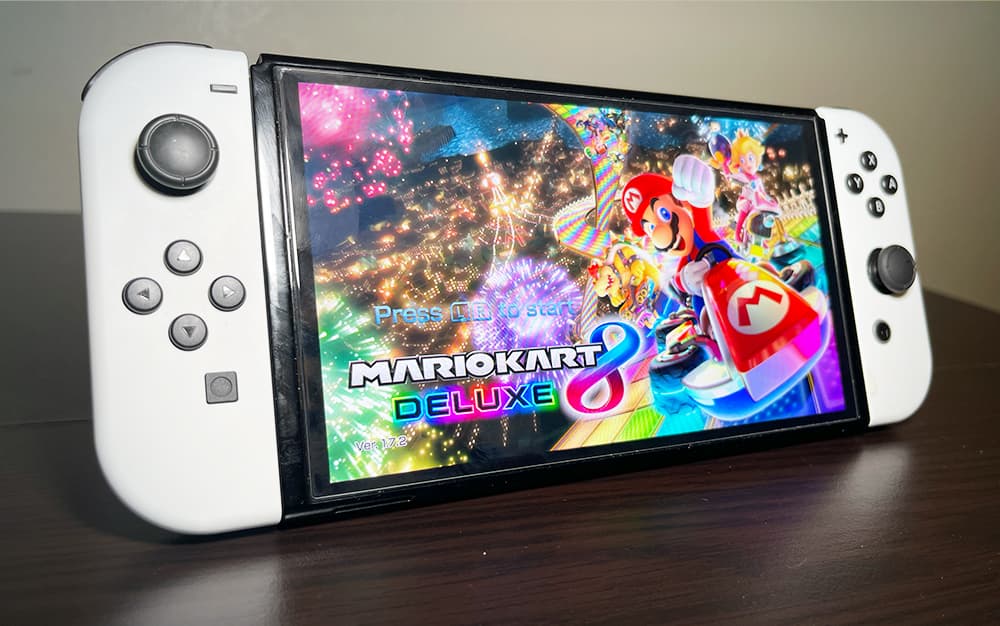 No matter how great a new Nintendo console is, the first iteration can almost always be considered a beta. Upon its first release, the Game Boy Advance still ran on batteries and didn’t even have a backlight. The bulky original Nintendo DS looks practically primitive when compared to the far sleeker Nintendo DS Lite. Early adopters help Nintendo in working out the kinks before a shinier option makes this year’s model obsolete. This brings us to the Nintendo Switch OLED model.

The third iteration of Nintendo’s immensely popular home console is the latest upgrade offered after the basic model’s release in 2017, followed by the Nintendo Switch Mini in 2019. There are a few technical enhancements but the obvious one is its big, bright OLED screen. Is this new display worth shelling out the extra gold coins for, or should gamers hold out until the next revamp? It depends on how you get your game on, of course.

What is the Nintendo Switch OLED?

Nintendo Switch OLED’s new stand spans the length of the back of the console and is a little sturdier when playing in tabletop mode. It’s also adjustable, so you can view the console from a handful of different angles. Nintendo Switch OLED’s dock comes with a built-in Ethernet port for more secure wired connections, but it did so at the cost of one of the USB 2.0 ports. Strangely enough, both the original Nintendo Switch and the OLED upgrade work with this new dock.

Aside from the obvious screen which gives this new model its name, there are a few new changes to the console. For one, Nintendo Switch OLED comes with a whopping 64 GB of memory, which doubles the space available on the original Nintendo Switch. It’s a welcome addition to anyone who’s determined to go digital this generation. The console’s memory is upgradable up to 2TB via a microSD card, which slides into the console just under its stand.

We further explain how we test gaming equipment here.

Nintendo Switch OLED Review: Is it Worth Upgrading to the New Switch Model?

Anytime a new version of a console is released, a dedicated user must ask themselves a question: Do I need to drop the cash on this new version? After all, the previous new Nintendo Switch offering was rather easy to pass on. Nintendo Switch Lite is built strictly for portability, is a good bit smaller, and doesn’t even come with a dock to connect it to a television. But is it worth upgrading to the OLED model? Here’s a peek at my first four months with the Nintendo Switch OLED.

Nintendo Switch OLED was released on October 8, 2021, alongside the celebrated and long-awaited "Metroid: Dread." Samus’ latest romp was a perfect pairing with this new console. The game includes some spooky stealth areas where blood-thirsty AI robots chase you down narrow passages. If they get their metal mitts on you, they run a spike through your neck causing an instant Game Over that fills the player with visceral dread, hence the name. To amplify this heart-pumping action, I played "Dread" with all the lights off in the house, save for the light coming from the screen, which admittedly was abundant. After about an hour of play, it was clear that there was no going back to playing in handheld mode on a lesser Switch console.

For a console that doubles as a portable, giving the device an OLED screen was an easy way to bolster the visual output of the Switch OLED, which lags behind the Xbox Series X and the PS5. Both the Microsoft and Sony consoles output in 4-8K, and even have processing powers that can go toe to toe with modern gaming PCs. OLED stands for Organic Light Emitting Diode, and these screens are put in everything from smartphones to cameras. The technology provides brighter screens, better contrast, wider color ranges, and even faster refresh rates, which makes them perfect for gaming applications. It’s no surprise that my experience with "Metroid: Dread" felt all the more terrifying considering that everything — including the wall-crawling death robots — looked crisper than ever before. Releasing "Metroid: Dread" along with the new console was a seriously smart way to show off the Nintendo Switch OLED’s capabilities.

A new screen gives gamers a good excuse to dip back into games that were released ages ago, including visual masterpieces like "The Legend of Zelda: Breath of the Wild" and "Super Mario Odyssey." While big-screen experiences are engrossing, unless your television is also an OLED TV, playing in handheld mode is almost always preferable. Light is such a game-changer when it comes to portable gaming. Even playing legacy titles via Nintendo Switch Online feels new and more immersive than before. Even in 16-bit titles, colors come in more vibrant than before. Kirby pinks, Pikachu yellows, and of course, Mario reds practically pop off the screen.

Other Upgrades (and Lack Thereof)

While the screen is the Nintendo Switch OLED’s main improvement, there are a few more QoL upgrades. The new Nintendo Switch OLED stand spans the length of the back of the screen and offers far more angles than the original ever did. I can say with confidence that I’ve never played in tabletop mode. However, a handful of multiplayer titles could take advantage of this, including Nintendo Switch versions of popular board games like "Monopoly Madness" and "Catan."

The Nintendo Switch OLED dock also comes with a wired LAN port. I wish I could report that this vastly improves the lackluster Nintendo Switch Online multiplayer experience. Sadly, it does not. While the dock traded one of its USB 2.0 ports for it, this sacrifice isn’t one that stung too much. The inside of the dock is a little crowded, so most USB accessories had a hard time maneuvering back there anyway. And that’s all she wrote, upgrades-wise. Nintendo touts better speakers in tabletop and handheld modes, but the difference between the Nintendo Switch OLED and the original model is negligible. The battery life, video output, and GPU remain unchanged. That fabled Nintendo Switch Pro with all the technical upgrades is nothing but a dream…for now.

As stated above, OLED screens breathe new life into games, providing some never-before-seen visuals, in handheld and tabletop modes. Here are a few popular titles I believe take full advantage of the bright, shiny screen.

The latest, and quite possibly greatest adventure featuring bounty hunter Samus Aran was in development hell starting back in the Nintendo DS era. The long-awaited return to form came out the same day as Nintendo Switch OLED, and it’s one of the best games to play in portable mode. Something all Metroid games have in common is long stretches of desolation punctuated with heart-pumping combat. Every one of the nine areas in “Metroid Dread” takes advantage of the OLED screen, from enhancing contrast in dimly-lit tunnels, or making molten rock mossy forests look as vibrant as a nature documentary. Where OLED truly shines is in the stealth areas, which are flooded in over-saturated whites. Running away from killer robots is still scary when playing on a big-screen TV, but a beaming screen inches from your face makes the threat feel far too real.

“Legend of Zelda: The Breath of the Wild”

While it is technically a Wii U title, "Legend of Zelda: Breath of the Wild" launched along with the original Switch and is easily the title that moved folks into splurging on a new console in March 2017. There’s a sequel in the works, but folks are still digging into the guts of this massive adventure. If you haven’t played the game in a while, playing it on the Nintendo Switch OLED doesn’t feel brand new, but it’s close. Every inch of Hyrule comes in even more color-rich than before, and you can expect a surprising amount of depth when you encounter shadowy mountainsides and sunny skies.

“Kirby and the Forgotten Land”

Kirby games are always lousy with color, and “Kirby and the Land” is no different. However, Kirby’s latest romp is his first fully isometric 3D adventure. When you account for the sheer real-estate he covers, it's his biggest game too. This is Kirby's most colorful adventure yet, which if you're familiar with Kirby games is saying something. It's also one of the first Kirby games in a long while with actual stakes, surprises, and secrets, which are only amplified by a big OLED screen. Whether you're rushing bosses or simply taking in the sights in Waddle Dee Town, "Kirby and the Forgotten Land" sings in portable mode.

Q: Where can I buy Nintendo Switch OLED?

You can buy the Nintendo Switch OLED in most stores where video games are sold.

Q: When will Nintendo Switch OLED be back in stock?

Q: Does the Nintendo Switch have an OLED screen?

For gamers looking for a console powerhouse with 4K output and faster processing speeds, the Nintendo Switch OLED feels like a smack in the face. Granted, lagging behind the competition is what Nintendo does best, and it’s a gamble that often pays off, especially in the current console generation. The Switch OLED packs a beautiful screen that makes experiences in new games more memorable and immersive than ever before when playing in handheld and tabletop mode. If your Switch never hardly ever leaves your dock, there’s no sense in upgrading just yet. However, if you’re the kind who games on the couch, in bed, in the car, and yes, even in the bathroom, the Nintendo Switch OLED may be a worthy investment for your gaming habit. This goes double for the few who have yet to dive into the Nintendo Switch craze. There’s no better place to start than with the Nintendo Switch OLED.