How a Single Number Can Change the Universe: 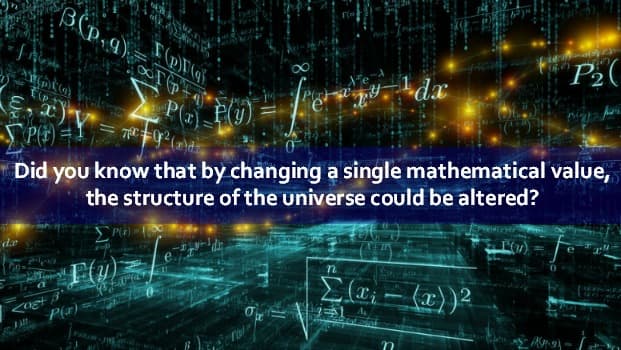 A majority of you are probably familiar with the concept of physical constants; however, if you’re not, I highly recommend that you read the following. Ultimately, these numbers are the underlying mathematical framework for our entire universe, so they’re kind of important. In fact, all of the complexity we see in the sky at night, all of our science, everything we know and see, all of this stems from just a few numbers. I know it sounds rather insane, which is why I will ask you to hold your disbelief for just a few minutes, and allow me to explain…

There are currently only 26 fundamental numbers that define our entire universe. You can think of these numbers as dials on a cosmic machine, set to the right values in order to allow our universe to exist. These fundamental dials, if you will, all share the unique trait that they literally cannot be reduced (at least, not yet) to a more simple number. They are, by definition, fundamental. Every fundamental constant shares the same trait of not possessing any units of measurement (it sounds confusing, I know, but bear with me).

These numbers do not possess any units of measurement because all measurement comes from these constants. Indeed, fundamental constants are the leftover numbers of the scientific theories of general relativity and quantum field theory. They are the furthest reduced pieces of the puzzle, and they cannot be broken down themselves in anyway. In a sense, they 'fall out' of the theories as pure mathematical facts of the universe.

Some examples of these constants include, but are not limited to: the speed of light, the mass of an up quark, the mass of the electron, the cosmological constant, the gravitational constant, etc. All of the aforementioned constants cannot change.

They are each unique, yet they combine together to form literally everything through their unchanging values—they are the numbers that hold our atoms together and set the stars on fire. Without these exact numbers, there would be no universe (at least, not as we know it). Thus, a question that could be asked is, what if we moved the dials?

What if these constants did — by some miraculous chance— change?

If our theories stand up, then it would spell catastrophe for our universe. For example, observe the fine structure constant, the constant that determines the raw strength of the electromagnetic field. If this value was changed by a just a fraction of its current value, atoms would have never been able to form. The electrons would be repulsed too strongly by the nucleus and, boom, nothing. Well, not nothing. There’d be something, but we wouldn't recognize it at all. That new universe would essentially be a warm glow with no discernible structure.

Each time you change one of the dials, a new universe would be formed in a way that is vastly different from what we see as our own universe. This is why we must have a respect for these fundamental constants. On all scales, from quarks to quasars, these numbers define us.