Why Physics Says You Can Never Actually Touch Anything

If you needed proof that physics is really strange...

If you’re reading this right now, it’s a sure bet that you are touching something, be it your cellphone, laptop, chair, desk, or a nice plush bed with Egyptian-cotton sheets (we can dream, right?). Speaking of that nice plush, comfy bed, I hate to shatter the illusion, but you aren’t actually touching it.

Everything you can see, touch, and “feel” is made up of atoms — the infinitesimally small constituent parts of matter. The field of study related to these, called “quantum physics,” gives us plenty of mind-bending things to consider about the world around us — specifically, the indistinguishable activities going on at an atomic scale.

Ultimately, it may seem the atomic world isn’t particularly relevant to our day-to-day lives. However, this information is a key point when it comes to our understanding of how the four forces shape the physical world, and thus, it is key to understanding the universe. After all, you can’t understand how large things work without knowing the ins-and-outs of the small stuff, too.

Among the phenomena it encompasses, we have: quantum entanglement, particles that pop in-and-out of existence; the particle-wave duality, particles that shape-shift at random; strange states of matter; and even strange matter itself. Quantum mechanics also tells us that we are made up of particles, which means that, microscopically, all sorts of strange things are going on within us that aren’t perceivable to the human eye — things that sometimes seem to make little sense.

The Weird World of Particles

For starters, almost all of the mass an atom has is concentrated into an incredibly small region called the nucleus. Surrounding the nucleus is a whole lot of seemingly empty space, except for the region within an atom where electrons (and protons) can be found orbiting the central nucleus. The number of electrons within an atom depends on the element each atom is supposed to comprise.

Like photons, this funky subatomic particle also exhibits the particle-wave duality, which means that the electron has characteristics of both a particle and a wave. On the other hand, they have a negative charge. Particles are, by their very nature, attracted to particles with an opposite charge, and they repel other similarly charged particles.

This prevents electrons from ever coming in direct contact (in an atomic sense and literal sense). Their wave packets, on the other hand, can overlap, but never touch.

The same is true for all of humankind. When you plop down in a chair or slink into your bed, the electrons within your body are repelling the electrons that make up the chair. You are hovering above it by an unfathomably small distance.

Why We Think We Touch Things

I’m sure some of you will wonder, “If electron repulsion prevents us from ever truly touching anything, why do we perceive touch as a real thing?” The answer boils down to how our brains interpret the physical world.

In this case, a number of factors are at work. The nerve cells that make up our body send signals to our brain that tell us that we are physically touching something, when the  sensation of touch is merely given to us by our electron’s interaction with — i.e., its repulsion from — the electromagnetic field permeating spacetime (the medium electron waves propagate through). 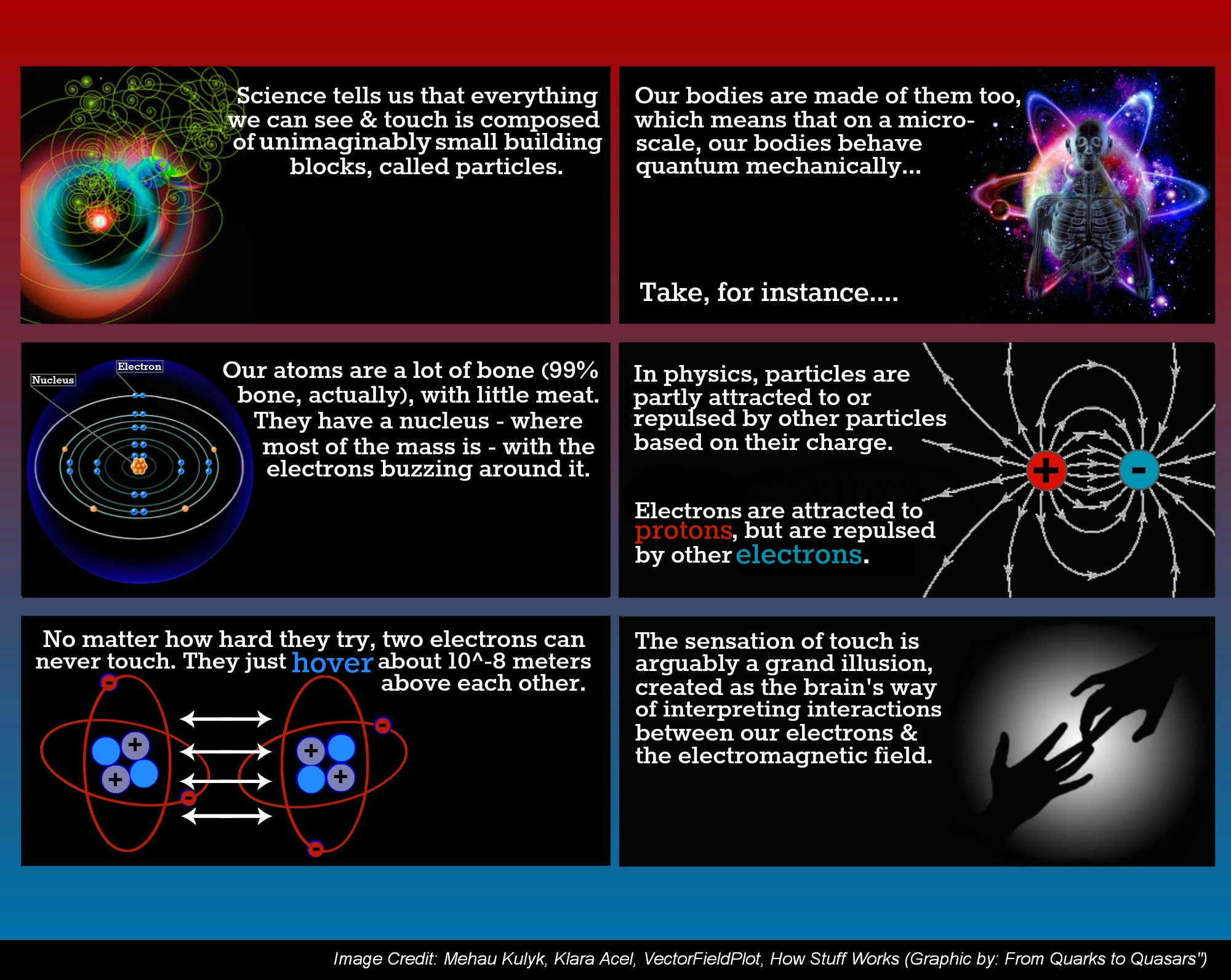 Also note, various things play a role here in making collections of particles into tangible things. We have things such as chemical bonding and, of course, the four primary forces mentioned above. Chemical bonds allow electrons to “latch on” to imperfections within an object’s surface, creating friction.

For those that have persevered thus far:

You will see that the purely electro-static repulsion between electrons is not the only reason why you hover above your chair. In the normal case, it’s about as strong as the Pauli Exclusion Principle when it comes to pushing things apart. It’s actually a combination of these two effects dominating the actual behavior. By that, I am speaking of the unbelievable idea that electrons know where every other electron is, and they try to avoid each other as much as possible, resulting in an exponential decrease in the force between electrons, even without the electromagnetic repulsion in play.

All in all, isn’t it amazing how these things relate? It’s a fundamental scientific truth that things are often not as they seem, or at least, they are not as we perceive them to be. It throws everything we think about the universe into a new light.

Physicists May Have Just Discovered A New Form Of Light