The Heliosphere & Our Solar System's 'Tail' 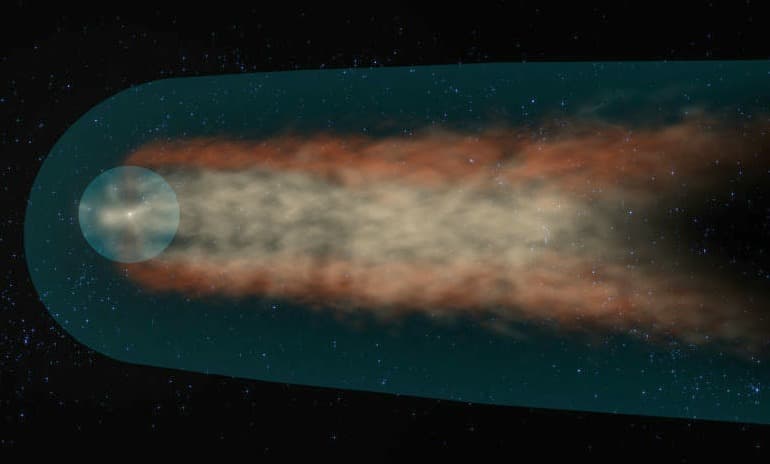 In August 2012, NASA’s Voyager 1 spacecraft became the first human-made machine to venture beyond the boundary of our solar system—into interstellar space. Both Voyager 1, and its partner, Voyager 2, are expected to shed light on the workings of the heliosphere: the protective “bubble” surrounding our solar system—and hopefully telling us what lies beyond.

Generated by charged plasma expelled from the Sun through solar winds, the heliosphere completely envelops everything under the Sun's sphere of influence—from the planets, to their moons—in a vast magnetic bubble. Those "solar winds” extend far beyond the orbit of the outermost planets, creating a buffer that shields us from the hazards of interstellar space, and the “winds” of other stars.

Even though its name might imply that the heliosphere is a sphere, the “heliotail” might be a more apt name.

The gist is this: As our solar system moves around the galactic center, and through plane of the Milky Way, it acquires a comet-like tail.

Our galaxy’s tidal forces then exert enough pressure to distort the four-lobed structure slightly, pulling it inward toward the heart of our galaxy.

Gateway to the Galaxy:

From the heliopause, the pressures between the solar wind and the interstellar medium balance out; The temperatures of charged particles drop sharply and the concentration of galactic cosmic rays increases dramatically.

How do astronomers know this? Although much of what’s known about the heliosphere and how it behaves comes from theoretical models, the Voyager 1 probe has crossed the termination shock and is heading toward the heliopause itself. That means it's sending back real information about what happens at the edge of our solar system.

That wasn’t Voyager’s first mission plan, though. Launched in 1977, Voyager 1’s job was to observe Jupiter and Saturn. On its heels, Voyager 2 visited Uranus and Neptune—ultimately becoming the only craft in history to study the outermost planets. But in 1990, their objectives changed..

Renamed the Voyager Interstellar Mission, they were tasked with going where no craft had ever gone before—they would pierce the boundary of our solar system itself.

Voyager 1 crossed termination shock in 2004, followed by Voyager 2 in 2007. That passage marked their journey into the heliosheath, an area of uncertain thickness that could take 10 to 20 years to cross.

Wanderers Among the Stars:

Once past the heliopause, the forces of interstellar winds and the galactic tide take over. Then the Voyager probes will become true interstellar explorers, headed for a long journey that will take them past other stars, including the brightest star in our sky. Voyager 1 will pass within 4.3 light years (25 trillion miles) of Sirius in about 296,000 years.

In many ways, the heliosphere will remain a mystery after the Voyager probes have come and gone, but we are well on our way toward uncovering some of its secrets.