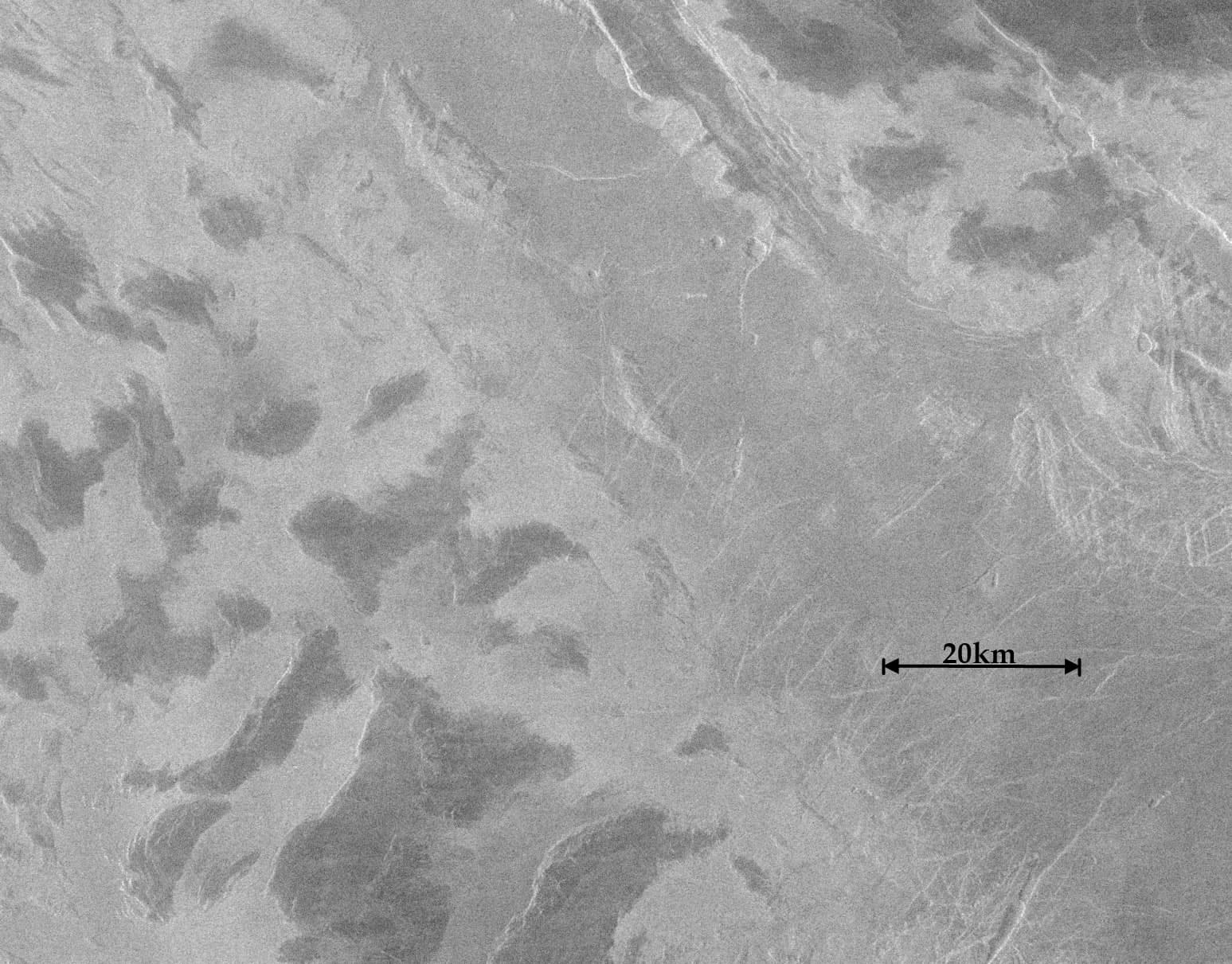 Venus is hiding something beneath its brilliant shroud of clouds: a first order mystery about the planet that researchers may be a little closer to solving because of a new re-analysis of twenty-year-old spacecraft data.

Venus’s surface can’t be seen from orbit in visible light because of the planet’s hot, dense, cloudy atmosphere. Instead, radar has been used by spacecraft to penetrate the clouds and map out the surface -- both by reflecting radar off the surface to measure elevation and by looking at the radio emissions of the hot surface. The last spacecraft to map Venus in this way was Magellan, two decades ago. One of the Venusian surprises discovered at that time is that radio waves are reflected differently at different elevations on Venus. Also observed were a handful of radio dark spots at the highest elevations. Both enigmas have defied explanation.

“There is general brightening upward trend in the highlands and then dark spots at the highest locations,” explained Elise Harrington, an Earth sciences undergraduate at Simon Fraser University, in British Columbia, who revisited the Venus data during her internship at the Lunar and Planetary Institute, under the direction of Allan Treiman. Brightening, in this case, means the radio waves reflect well. Dark means the radio waves are not reflected. In other words, the higher you go on Venus, the more radio reflective the ground gets until it abruptly goes radio black.

“Like on Earth, the temperature changes with elevation,” Harrington explained. And the cooler temperatures at altitude lead to ice and snow, which create a similar pattern of brightening for Earth -- but in visible light. “Among the possibilities on Venus are a temperature dependent chemical weathering process or heavy metal compound precipitating from the air -- a heavy metal frost.”

Getting to the bottom of these mysteries has been very hard because Venus has not been revisited since Magellan and no better data is available.

So Harrington and Treiman made do by re-purposing the old data. They used recently-available stereo radar elevation data (from Dr. R. Herrick, University of Alaska) rather than using the lower resolution radar altimetry. That increased their altimetry resolution from seeing patches 8 by 12 kilometers to just 600x600 meters. They also used Magellan’s Synthetic Aperture Radar (SAR), with its 75x75-meter footprint, to look at radio reflectance, rather than the data on radio emissions from the surface, which had a coarser 15 by 23 kilometer resolution.

They applied these to two areas in the Ovda Regio highlands region of Venus where they confirmed the same pattern of radar reflections brightening with increasing elevation, as was found by previous researchers. The radar reflection was low at the lower 2,400 meter (7,900 foot) elevation, then rapidly brightens up to 4,500 meters (14,700 feet). But they also found a lot more of those strange black spots, with a precipitous drop in the reflections at 4,700 meters (15,400 feet).

“The previous author saw a few dark spots,” said Harrington. “But we see hundreds of them.”

Years ago it was proposed that some sort of ferroelectric compound might be the cause of the brightening and the dark spots, but so far no specific compound has been identified which does the trick. Then again, with the surface of Venus being at almost 900 °F (500 °C) under more than 90 times the air pressure of Earth’s atmosphere at sea level, with occasional showers of acid, it’s not easy to test the properties of materials under Venusian conditions.

“No one knows what explains the sudden darkness,” said Harrington, who presented the work at the meeting of the Geological Society of America in Vancouver, B.C., on Monday, Oct. 20. “We think this might spur some more interest in Venus.”